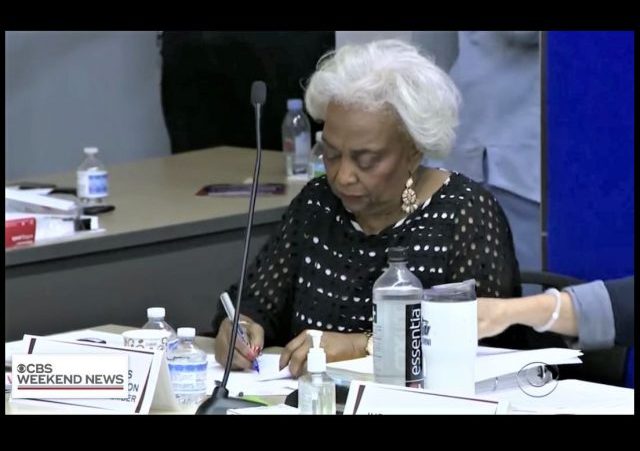 As the 2018 midterm election fiasco continues to unfold in Florida, leftstream media and Democrats contend that criticism of Broward County Elections Supervisor Brenda Snipes is rooted in racism. Because of course.

A top elections official in Florida who endured national humiliation after missing a midterms recount deadline by two minutes has told the Guardian that racism is “probably” a factor in the backlash against her.

Brenda Snipes, elections supervisor of Broward county, was condemned by Republicans and Democrats after failing to submit tallies in the US Senate race between Rick Scott and Bill Nelson on schedule.

On Friday, with a hand count of votes under way, about two dozen protesters continued their vigil in a car park outside Snipes’s headquarters. Some claimed without evidence that she had missed the deadline deliberately because the results she oversaw boosted Scott’s overall lead.

Asked if she felt it was racially motivated, the supervisor replied: “Probably. Probably.” She declined to elaborate.

The delay, however, is somewhat odd or as the Guardian puts it “mysterious.”

Snipes had promised “100%” in a CNN interview earlier this week that Broward county, a Democratic stronghold, would complete its machine recount on time. It appeared to do so with just under 15 minutes to spare before Thursday’s 3pm deadline. The recount showed Scott, currently the Republican governor of Florida, down 606 votes from the first count and Nelson down 1,385 – a net gain for Scott of 779 votes.

But mysteriously, Snipes only sent the results to the Florida secretary of state at 3.02pm on Thursday, rendering the entire exercise a waste of time and money. The state reverted to the county’s first tallies instead. Two other counties in Florida also blew past the deadline.

Snipes has a long history of election tampering, one that has raised questions about why she still holds this office.  Appointed by then-Governor Jeb Bush (R-FL), Snipes retained her position right through Governor Scott’s two terms in office, as well.

“She was brought in by [Jeb Bush] because the person before her was a disaster,” Stoddard said, noting that the younger brother of George W. Bush replaced a Democrat with another Democrat in the South Florida county.

“I hold [Scott] fully accountable for the state of the voting system in Florida today,” she added.

. . . . “It’s on him, and poor Ron DeSantis (R-Palm Coast) better clean it up in the next two years,” she said. DeSantis currently holds a thin but vote-wise voluminous lead over Tallahassee Mayor Andrew Gillum (D).

Stoddard said that throughout Scott’s tenure, he had the opportunity to replace Snipes — who previously came under fire for prematurely destroying ballots during the contentious Democratic primary race in 2016 between Rep. Deborah Wasserman-Schultz and Timothy Canova.

I totes did not see this coming.