His chief of staff will serve as acting AG 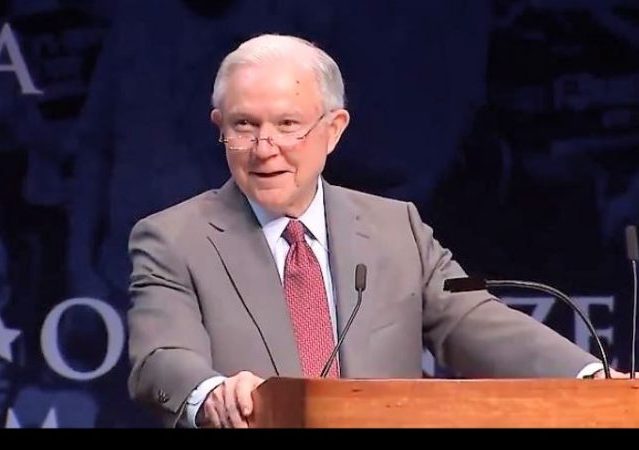 US Attorney General Jeff Sessions has resigned at Trump’s request.

At your request, I am submitting my resignation.

Since the day I was honored to be sworn in as Attorney General of the United States, I came to work at the Department of Justice every day determined to do my duty and serve my country. I have done so to the best of my ability, working to support the fundamental legal processes that are the foundation of justice.

The team we assembled embraced your directive to be a law and order Department of Justice. We prosecuted the largest number of violent offenders and firearm defendants in our country’s history. We took on transnational gangs that are bringing violence and death across our borders and protected national security. We did our part to restore immigration enforcement. We targeted the opioid epidemic by prosecuting doctors, pharmacists, and anyone else who contributes to this crisis with new law enforcement tools and determination. And we have seen results. After two years of rising violent crime and homicides prior to this administration, those trends have reversed- thanks to the hard work of our prosecutors and law enforcement around the country.

I am particularly grateful to the fabulous men and women in law enforcement all over this country with whom I have served. I have had no greater honor than to serve alongside them. As I have said many times, they have my thanks and I will always have their backs.

Most importantly, in my time as Attorney General we have restored and upheld the rule of law-a glorious tradition that each of us has a responsibility to safeguard. We have operated with integrity and have lawfully and aggressively advanced the policy agenda of this administration.

I have been honored to serve as Attorney General and have worked to implement the law enforcement agenda based on the rule of law that formed a central part of your campaign for the Presidency.

Thank you for the opportunity, Mr. President. 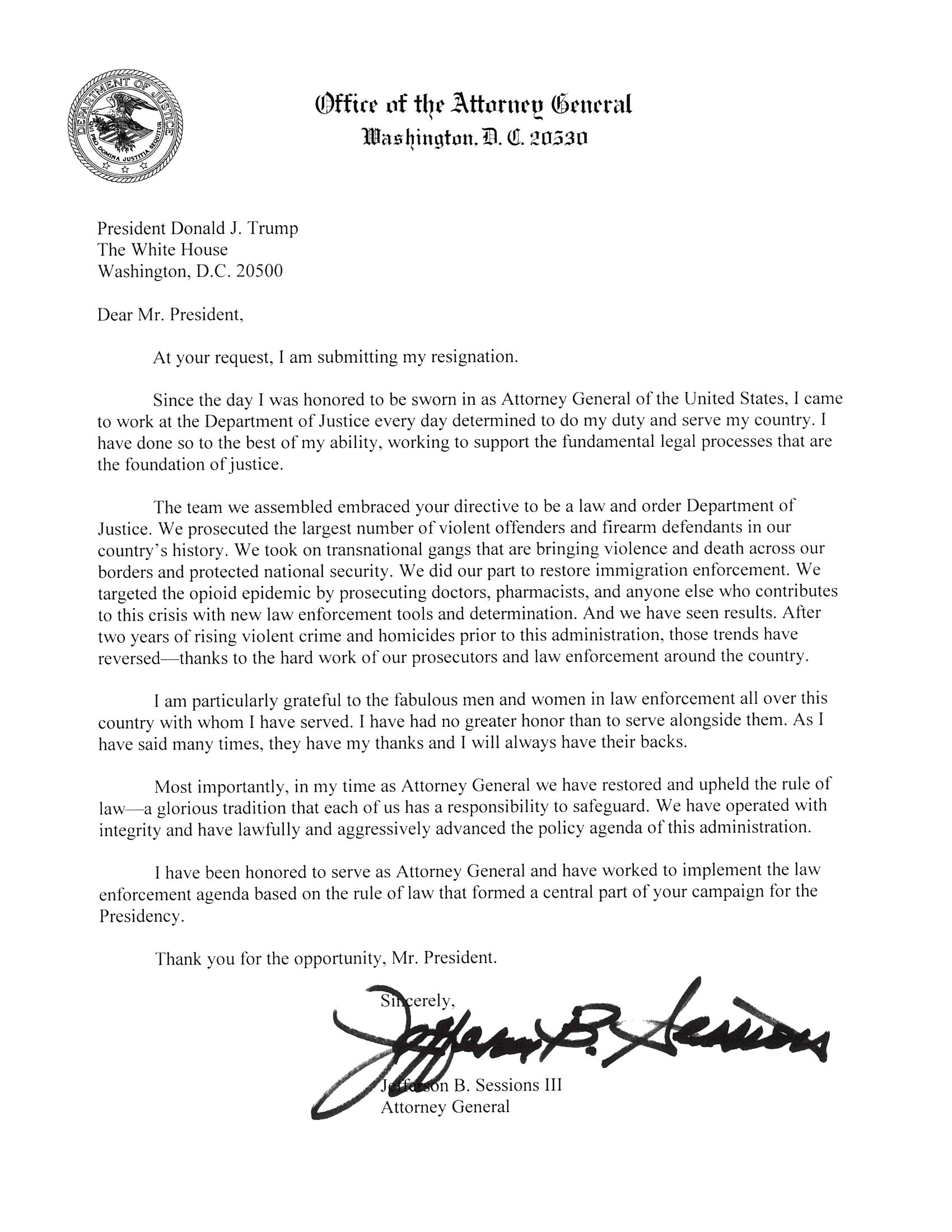 More as we have it.

McConnell: I thank Jeff Sessions for his dedicated service as Attorney General. Throughout his career, as a prosecutor, a Senator and as Attorney General, he remained steadfast in his commitment to the rule of law and his love of our great nation. I wish him well

Jeff Sessions was one of very few genuine Conservatives to toe the line in the Senate for years. It’s sad and annoying to see some turn on him so harshly now over his tenure as AG. He was and is an honorable man.

Senate Minority Leader Chuck Schumer on Jeff Sessions' resignation: "Protecting Mueller and his investigation is paramount. It would create a constitutional crisis if this were a prelude to ending or greatly limiting the Mueller investigation." https://t.co/5Mi7dr621o pic.twitter.com/GsSnD6oxBO

Sessions will be back in the saddle as Senator from Alabama come January, 2021.

Jeff Sessions, assuming that he was NOT an active collaborator in the Cabal to remove a duly elected President from office under the ruse that some Phony Russian Collusion occurred, then one has to believe that he is the quintessentil example of “The Peters Principle.” He always seemed “Star Struck” to have been given the job, but he sure didn’t use the opportunity to do what we expected of him and gave away any chance by foolishly recusing himself immediately.

His history doesn’t demonstrate that he had any Executive Management experience. He was an obvious choice for the AG Job given his public positions on illegal immigration, but doing the job of “Cleaning Out the Stable” of the politicized and weaponized Dept. of Justice and FBI was obviously beyond his skill set. He apparently permitted himself to be snookered by Deep State Snake, Rod Rosenstein, into recusing himself which then elevated Rosenstein into being the REAL AG while Sessions was neutered to perform such unimportant matters as going after College Basketball Coaches, jawboning that college campuses ought to permit First Amendment Rights, and others.

I noticed his face seem to be covered with sweat as he was leaving the DoJ same as one may expect a person having a heart attack; he likely expected to be fired, but perhaps not quite so fast.

I’ve seen some of the names floated as Session’s replacement, e.g., Chris Christie, Rudy Guiliani, and Janice Rogers Brown, and I’m not feeling the “Love” to get the kind of job we need done accomplished with them. We need a top to bottom Colon Flush to get all the garbage that accumulated for 8 years under Obola, Holder, and Lynch. I don’t think that another politician would be wise and if a woman of color is selected and it doesn’t work out, how the hell do you politically dismiss her without damaging the President?

We absolutely need to hold members of Team Obama to account or there will be no barrier to seeing the same kinds of behavior again. And, we definitely need to have an AG that is going to go after membrs of Congress who have been leaking.

Now with a new AG maybe we’ll see him institute proceedings to investigate Hillary for ALL of her crimes.