Acosta got his press pass back, but his media colleagues will pay the price

Acosta got his press pass back, but his media colleagues will pay the price

Court ruling permits White House to promulgate press conduct and discipline rules, something the White House is eager to do. 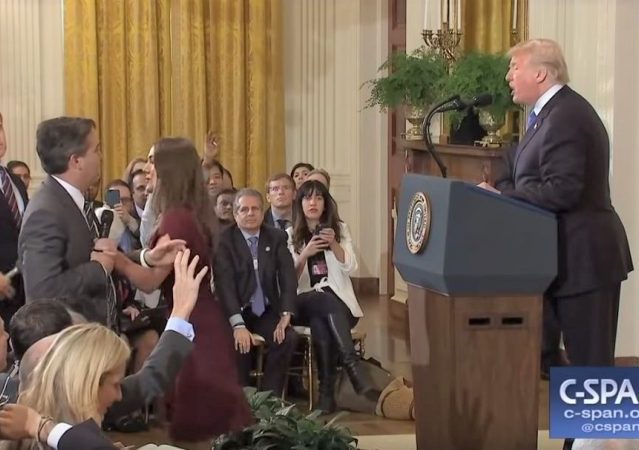 On Friday, November 16, 2018, the federal District Court in D.C. granted a temporary restraining order compelling the White House to reinstate CNN’s Jim Acosta’s “hard pass,” that gives him privileged access to the White House for press briefings and events.

As described in our coverage of the decision, there is no written opinion or transcript as of now that can be reviewed to understand the precise parameters and reasoning of the judge. As of this writing, we only have media reports as to the judge’s stated reasons.

Based on those media reports, it appears that Acosta won on procedural grounds, that he was not afforded due process in the revocation of his hard pass. The judge stated that the ruling was narrow, and that it did not include a determination (yet) that Acosta’s First Amendment rights were violated.

Acosta exploited the lack of formal procedures and process to get back his pass. But that may come back to bite his colleagues.

While I didn’t expect the judge to grant the TRO, I predicted Acosta’s lawsuit risked taking bad facts and making bad law, Jim Acosta and his media enablers are on the verge of creating law that will damage journalism:

“Bad facts make bad law” is a common saying. What that means is that bad facts in a specific case can create legal precedent that is damaging to others, not just the bad actor in the case.

Nowhere is that more clear than in the pending motion by Jim Acosta and CNN, publicly supported by over a dozen major media outlets, requesting a Temporary Restraining Order and Preliminary Injunction forcing the White House to restore Acosta’s press “hard pass.” ….

In the absence of clear law, the president and press have established certain norms of conduct. The White House gets to decide who gets hard passes, but usually gives such passes to numerous reporters for each of the major networks and newspapers without singling people out for denial.

A reciprocal norm is that reporters who get hard passes, while they may ask difficult and contentious questions, do not abuse the privileged access status of hard passes by disrupting press conferences or other events.

Acosta has pushed these norms to the extreme ever since Trump took office. He is a showboater who makes everything about him. He shouts questions in very dramatic fashion. He offers commentary and criticism, as if he were a political opponent and the press conference were a debate.

Acosta’s conduct prior to November 7 was the subject of much criticism from Trump and Sarah Sanders, among others, but he never lost his “hard pass” before. All the while, CNN promoted Acosta’s antics for ratings and clicks, and other media were largely silent as they witnessed his aggressive self-aggrandizing performances during press conferences and press briefings.

As even the NY Times acknowledges, under the TRO Ruling the White House can design policies and procedures to regulate the conduct and discipline of reporters granted access to the White House:

The ruling was a significant victory for CNN and Mr. Acosta, but Judge Kelly declined to say whether the denial of the White House press pass had amounted to a First Amendment issue.

“I want to emphasize the very limited nature of this ruling,” he said, saying that it was not meant to enshrine journalists’ right to access. “I have not determined that the First Amendment was violated here.”

The legal battle is expected to continue: Judge Kelly ruled only on the network’s emergency request for a temporary restoration of Mr. Acosta’s credentials. Hearings on other issues in the case are expected to resume next week.

Some lawyers said that, CNN’s initial victory aside, journalists who cover the president had to remain vigilant. The case underscored that the entree granted to the White House press corps, which has worked out of the West Wing for decades, relies on custom rather than any legal framework.

“This could backfire,” said William L. Youmans, a professor of media law at George Washington University. Mr. Acosta “gets his credential now, but it empowers the Trump administration to come up with conduct-based criteria.”

“A ‘rudeness’ or ‘aggressive behavior’ policy would have a huge chilling effect, and would be much more damaging to the whole system,” Dr. Youmans added. “If it lowers the bar for pulling credentials, it’s a recipe for a more tepid press.”

Trump has promised to do just that, Trump on CNN’s Jim Acosta: ‘If he misbehaves, we’ll throw him out’:

Trump sat down with the “Fox News Sunday” host on Friday for a wide-ranging discussion – the first time Wallace has interviewed Trump since he took office. Wallace pointed out that a federal judge ruled earlier Friday that the White House must reinstate Acosta’s press credential.

“Yeah, its fine, I mean it’s not a big deal. What they said, though, is that we have to create rules and regulations for conduct etc. etc. We’re doing that, were going to write them up right now. It’s not a big deal and if he misbehaves, we’ll throw him out or we’ll stop the news conference,” Trump said.

Wallace asked what rules the administration would put in place going forward after U.S. District Judge Timothy J. Kelly declared that Acosta should be allowed back in the White House.

“We’re writing them now. We’ll have rules of decorum, you know you can’t keep asking questions. We had a lot of reporters in that room, many many reporters in that room and they were unable to ask questions because this guy gets up and starts, you know, doing what he’s supposed to be doing for him and for CNN and you know just shouting out questions and making statements, too,” Trump said.

Marc Lotter, former press secretary to Mike Pence, appearing on NPR argued that ultimately the ruling is a win for Trump and future presidents, Is court ruling on CNN press pass a ‘win for the White House?’:

We continue our look at the president’s relationship with the press with Margaret Sullivan, Washington Post media columnist and longtime journalist. And Marc Lotter, he served as press secretary to Vice President Mike Pence and as special assistant to the president.

Welcome to both of you.

And, Marc Lotter, let’s start with you.

This judge today ruled on narrow grounds. He said the White House had to give Jim Acosta his pass back because he had been denied due process. So where does that leave us?

I think, long term, it’s a win for the White House and actually for future presidents, because this was a very tailored decision that wasn’t related around the First Amendment and unrestricted access to the White House, but on a due process side.

And the president today and Press Secretary Sarah Sanders have indicated they’re going to developing procedures and protocols to be followed. And then that will give them the future ability to take necessary actions if decorum and procedures are broken.

According to reports, over 50 White House press correspondents greeted and cheered Acosta upon his return to the White House immediately after the ruling.

That jubilation will be short-lived.

Put Acosta in the back row, and start the next presser by telling him that the next time he puts his hands on one of the women that works there he’ll be dragged out on his ass.

Dig up older issues of the New York Times and you will find them singing the praises of Mussolini and not in book reviews!

they did the same with Uncle Joseph.

Don’t call on Acosta, and/or move him to the back at the room.

The press corps – indeed, the whole nation – would be better served to NOT have a written code for decorum. Once you go to a written code, it will only grow and grow and grow as the participants look for loopholes and other things not expressly commanded or forbidden. A written code will eventually (and not all that distantly) deflect the press conference from its intent and purpose.

At the very least, the WH and its press office should announce to the press corps that they do not want establish any restraints on the press through a written code, but in order to allow the free-wheeling that is currently enjoyed, the press itself is going to have to be decorous.

With such an announcement, it is certain that some press rep will yell the question “what do you mean by decorous?” To which the reply is “that’s exactly why we don’t want to have to resort to a written code.”

Once again progressives not liking customs and traditions are forcing the government into coming up with written rules and regulations.

It’s a taste of what they’d do if they ever win the presidency, Hose and Senate. One will need a pettifogger to do anything so as to be sure they’re obeying the law, and likely there’ll be a clause to make sure they’re not obeying ALL of the law.