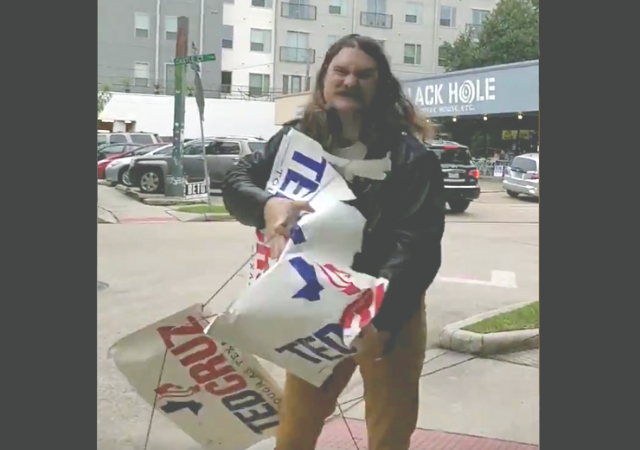 Elections bring out the best and brightest our country has to offer, like this guy.

In Montrose (Houston’s artsy and therefore more liberal pocket), a mustachioed man was filmed pulling up and destroying Ted Cruz yard signs. When confronted, he yelled, “I hate Ted Cruz!” and retreated to a coffee shop.

WATCH: A radical leftist rips Ted Cruz signs from the yards of Texas voters and destroys them while being videotaped. pic.twitter.com/BmGRjTENjd

I was trying to figure out if that was David Crosby or Rob Reiner.

Call the cops or animal control?

Any bets that the mad bomber who’s putting “pipe bombs” in Dem mailboxes turns out to be a “radical right wing extremist” with murky ties to Soros, the Clintons and/or the Obamas? This song has played too many times.

Montrose is the large gay-dominated area of Houston. If you want to see and hear all types of weirdos yelling and screaming at each other, go to Montrose.

You egotistically assumed that this person is a man. That, my friend, is a felony.