Trump: “What I said the person that we’re talking about didn’t know the year, the time, the place.” 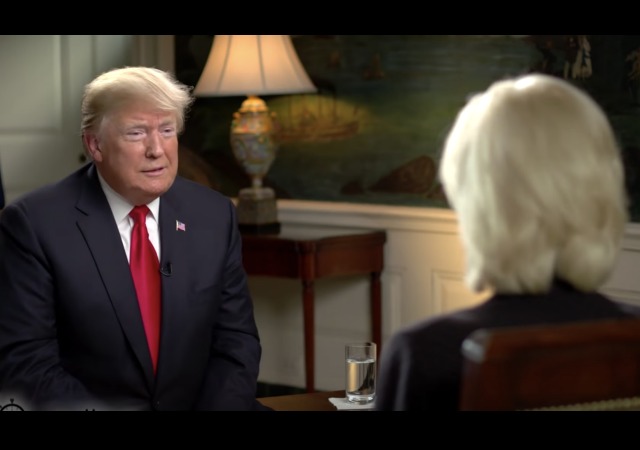 As you may remember, Trump received a lot of flack for a speech he gave in Mississippi during the hearings on Kavanaugh. Stahl told Trump he “mimicked” Christine Blasey Ford, the woman who accused Kavanaugh of sexual assault 30 years ago, but Trump said he only pointed out that Ford couldn’t remember the main details from the incident.

Stahl brought up the Mississippi speech and claimed that Trump mimicked Christine Blasey Ford, the woman who accused Supreme Court Justice Brett Kavanaugh of sexual assault over 30 years ago.

Mimick is a strong word and the clip CBS showed doesn’t back up Stahl’s description. Trump said he was just repeating what Ford told the Senate: she had no idea how she got home, how she got to the party, where the party took place, or even when the alleged assault took place:

Lesley Stahl: Why did you have to make fun of her?

President Donald Trump: I didn’t really make fun of her.

Lesley Stahl: Well, they were laughing.

President Donald Trump: What I said the person that we’re talking about didn’t know the year, the time, the place.

Lesley Stahl: Professor Blasey Ford got before the Senate and– and was asked what’s the worst moment. And she said, “When the two boys laughed at me, at my expense.”

Lesley Stahl: And then I watched you mimic her and thousands of people were laughing at her.

President Donald Trump: They can do what they– I– I will tell you this. The way now Justice Kavanaugh was treated has become a big factor in the midterms. Have you seen what’s gone on with the polls?

Lesley Stahl: But did you have to–

Lesley Stahl: And– but–

President Donald Trump: be honest with you.

Lesley Stahl: but do you think—you treated her with–

President Donald Trump: There are those that think she shouldn’t have–

Lesley Stahl: Do you think you treated her with respect?

President Donald Trump: I think so, yeah. I did.

Lesley Stahl: But you seem to be saying that she lied.

President Donald Trump: W– you know what? I’m not gonna get into it because we won. It doesn’t matter. We won.

To make matters worse, the person behind the 60 Minutes social media accounts is fudging the interview to make Trump look bad. When asked about the Mississippi rally, Trump told Stahl. “Had I not the made the speech, we would not have won. I was just saying she didn’t seem to know anything.”

When you’re so bad at your job you can’t even quote your own interview with the president United States correctly.

This is a lie. This is misinformation. This is fake news. https://t.co/a9CiQXIqaX

Trump told Stahl, “W– you know what? I’m not gonna get into it because we won. It doesn’t matter. We won.”

In other words, he said that to end the segment on Ford, not to describe the rally in Mississippi or anything to do with Kavanaugh or Ford.

Stahl asked Trump to pledge that he will not fire Mueller, who is investigating possible collusion between Trump and Russia in the 2016 election:

Lesley Stahl: Will you. Will you pledge– pledge that you will not shut down the Mueller investigation?

President Donald Trump: Well, I– I don’t pledge anything. But I will tell you, I have no intention of doing that. I think it’s a very unfair investigation because there was no collusion of any kind.

Lesley Stahl: But you won’t pledge–

President Donald Trump: There is no collusion. I don’t wanna pledge. Why should I pledge to you? If I pledge, I’ll pledge. I don’t have to pledge to you. But I have-

President Donald Trump: I have no intention of doing that.

Trump then asked Stahl if she really thinks he would call Russia to help him win an election. He said that Russia “wouldn’t be able to help me at all.”

Trump refuses pledge to not shut down the Mueller investigation

The Economy and Immigration

After the Mueller segment, 60 Minutes led us to believe that we’d watch a segment about the economy, which has been doing well under Trump. Unemployment is at 3.7% and there’s almost more jobs than there are people looking for work.

Nope. Stahl asked Trump if he has any regrets or anything he wished he hadn’t done. He brought up NAFTA and wished he had terminated the deal earlier in his term.

Obviously it wasn’t going the way Stahl wanted so she flat out asked him about the separation of children and parents at the border. Trump reminds Stahl that it was an Obama law on the books and that he wants an overhaul of our immigration laws:

President Donald Trump: No, but then everybody decided and the courts don’t want separation. And frankly, when you don’t do separa– when you allow the parents to stay together, okay, when you allow that, then what happens is people are gonna pour into our country.

Lesley Stahl: So are you gonna go back to that?

President Donald Trump: Well, we’re looking at a lot of things. Really what we wanna do is change the immigration laws, ’cause they were– they were a laughing stock all over the world.

Lesley Stahl: Are you willing though– I think that you’re saying you’re– it’s under consideration.

President Donald Trump: No, I want all the laws changed.

Lesley Stahl: But the children specifically–

President Donald Trump: there have to be consequences, Lesley, for coming into our country illegally. And part of the r– I mean, part of the reason, I have to blame myself, the economy is so strong that everybody wants to come into the United States.

Lesley Stahl: Can I just ask this simple question, yes or no.

Lesley Stahl: Are you willing to reinstitute that policy? You said, “We’re looking at everything.”

President Donald Trump: I will–

Lesley Stahl: Yes or no.

President Donald Trump: I will only– I can’t– you can’t say yes or no. What I can say is this: There are consequences from coming into a country, namely our country, illegally.

President Donald Trump: You don’t have to.

Lesley Stahl: ’cause I know you won’t– it–

President Donald Trump: But it’s the same as Obama.

Stahle tries to get Trump to name the people he is not thrilled with in his administration. She points out Secretary of Defense Jim Mattis, but Trump refuses to take the bait:

Lesley Stahl: What about General Mattis? Is he going to leave?

President Donald Trump: Well, I don’t know. He hasn’t told me that. I have–

Lesley Stahl: Do you want him to–

President Donald Trump: –a very good relationship with him. It could be that he is. I think he’s sort of a Democrat, if you wanna know the truth. But General Mattis is a good guy. We get along very well. He may leave. I mean, at some point, everybody leaves. Everybody. People leave. That’s Washington.

Yeah…I don’t see anything in that exchange that leads me to believe he will fire Mattis or that he doesn’t trust Mattis.

I see people jumping on Trump for not flat out saying that Russian President Vladimir Putin had a hand in the numerous poisonings of ex-Russian spies in the UK:

Lesley Stahl: Do you agree that Vladimir Putin is involved in assassinations? In poisonings?

President Donald Trump: Probably he is, yeah. Probably. I mean, I don’t–

President Donald Trump: But I rely on them, it’s not in our country.

Lesley Stahl: Why not– they shouldn’t do it. This is a terrible thing.

President Donald Trump: Of course they shouldn’t do it-

Lesley Stahl: Instead do you believe–

Yes, I think Putin is involved, but there is no hard evidence that shows his involvement so unfortunately we have to stick with probably. I would have loved to declare that former Attorney General Eric Holder had a hand in Operation Fast & Furious, but without concrete evidence I cannot say it.

Stahl’s Views on the Interview

Lesley Stahl has interviewed President Trump three times for 60 Minutes. This time, he was “so much more confident. He is truly president…I felt it in this interview.” Watch Lesley discuss her most recent interview with the president: https://t.co/B9gGU3rKyE pic.twitter.com/FT8nrjLphW

“Man, he didn’t want to answer that,” Lesley Stahl says of President Trump’s response to her question about pledging not to fire Robert Mueller. “But you know something? He enjoyed the sparring.” For more from the president’s 60 Minutes interview, visit https://t.co/njJWGDYJSu pic.twitter.com/YMWKsY4Js4

Notice how Trump didn’t allow Stahl to bully him. Less Trumpian Republicans would have been contrite under her badgering.

Seriously, she was constantly interrupting try to frame things and it wasn’t working. I am surprised they didn’t edit it more try to make him look bad because he comes out well in this interview.

I kept expecting her to start repeating: “So what you’re saying is…”

Trump just lead a Hillary deplorable around by her nose for sixty minutes.

can we now move on to bring Ford and her conspirators to justice?

OTOH with this being a taped interview she was able to make comments post-taping, like the part about the 32 people who have been charged with crimes by Mueller’s team. There are many (particularly since it is CBS) who don’t have a clue that 26 of those are Russians who will never see the inside of a courtroom and the remainder of those charged were charged with nothing which involved the alleged collusion with the Russians to influence the election.

Less of an interview, more of an interrogation by a hostile alien force.

thank you for watching and summarizing. That’s 60 minutes of my life I didn’t waste.

I’ve got to wonder what’s going on behind the scenes on the next SCOTUS nominee.

I’ve been wondering that too. It will more than likely be Barrett, so Catholicism/pedophilia/abortion will probably be the main lines of attack. I’m guessing they are already grooming some victims. Their stories will probably have themes of bullying, mean girl acts, white privilege, body shaming, the usual leftist drivel. She might even be accused of kicking a puppy. I think they will also focus on corroboration since ford had none. They will try to link the victims somehow, form a self-corroborating web of them. When rgb goes down, and President Donald J. Trump nominates ACB, there will be full blown riots. I hope I’m wrong but I’ll be prepared.

Overkill. For most of the pansy Socialist-Democrats 7 1/2 bird shot is more than sufficient, for Antifa #4 Buck, more pellets and adequate penetration on soft targets.

Better answer to Stahl who was badgering him for a “pledge”.

“I don’t have to make no steenkin pledge to you.” Who the heck does Stahl think she is?