Issues stay of deposition of Sec. Wilbur Ross, with possible broader stay of litigation to follow. 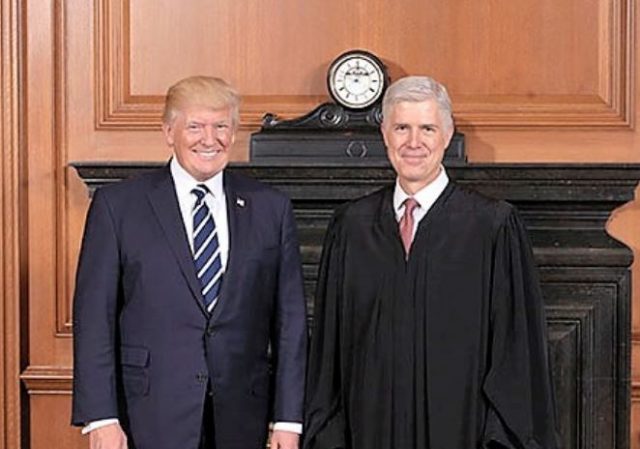 On Monday night, the Supreme Court granted the Trump administration’s request to shield Commerce Secretary Wilbur Ross from being deposed in a lawsuit over the addition of a citizenship question to the 2020 census. But the Court declined to block the deposition of acting Assistant Attorney General John Gore, as the administration had also asked.

It’s tough to say whether the White House should view this compromise — presumably brokered by Chief Justice John Roberts—as a win, loss or draw. Time will tell what impact it has on the census litigation.

But more broadly, the Court’s split-the-baby approach certainly doesn’t bode well for anyone hoping that the reinforced conservative majority will soon put an end to the lower courts’ ongoing power struggle with the Trump administration. Indeed, in a partial dissent, Justice Gorsuch, joined by Justice Thomas, criticized the majority for not going all the way, saying that they would’ve halted both depositions and all discovery outside the administrative record.

The case at hand comes from Federal District Court in Manhattan, where Judge Jesse M. Furman, an appointee of President Obama, is presiding over challenges to Secretary Ross’s decision to reinstate an old citizenship question on the 2020 census. The question asks respondents whether or not they are U.S. citizens, information the Commerce Department claims is helpful to enforcing the Voting Rights Act.

The plaintiffs are New York, other blue states, and assorted interest groups, and they allege that Ross’s true motive in adding the question is—what else?—racism: to depress responses from immigrants so as to diminish the representation of diverse states like New York and California.

Courts do, of course, hold facially neutral policies unlawful when they are a pretext for discrimination. But, Gorsuch writes, “leveling an extraordinary claim of bad faith against a coordinate branch of government requires an extraordinary justification.” In this case, the only evidence of bad faith the plaintiffs have presented is that Ross personally overruled subordinates who opposed the question and, supposedly, was untruthful about when he first considered reinstating it. Oh, and that Trump has said mean things about immigration in other contexts.

Depositions of Cabinet members are astonishingly rare, the most recent one having taken place in 1999. You don’t normally get to depose a secretary simply because they were personally involved in a decision, nor because you invoke the magic incantations “bad faith” or “animus.”

But there’s nothing unusual about a new cabinet secretary coming to office inclined to favor a different policy direction, soliciting support from other agencies to bolster his views, disagreeing with staff, or cutting through red tape. Of course, some people may disagree with the policy and process. But until now, at least, this much has never been thought enough to justify a claim of bad faith and launch an inquisition into a cabinet secretary’s motives.

Because of the Supreme Court’s action last night, Ross’s deposition is off the table for now, but Gore’s can happen whenever the trial judge allows it.

There is, however, an important procedural subtlety. Yesterday, the Court was merely considering an application for a stay, which it granted as to Ross’s deposition but denied as to Gore’s. A stay delays proceedings until the Justices can consider the issues on the merits. It’s possible that when the Court does consider the merits through certiorari review, which will likely be in the next week or so, it will decide that Gore should not be forced to sit for a deposition either.

The Court’s unsigned order seemed to entertain that very possibility: “The denial of the stay with respect to the remaining orders does not preclude the applicants from making arguments with respect to those orders.” On the other hand, it’s also possible, if extremely unlikely, that the Court will allow both depositions to proceed in the near future.

Because of all this uncertainty, the plaintiffs will probably try to depose Gore as soon as Judge Furman will allow.

I want to make a potentially major point, one that I haven’t seen raised by legal commentators. Perhaps I am mistaken, but it seems that Judge Furman and the plaintiffs have pretty much staked the entire case on Ross’s testimony. In his order authorizing the deposition, Furman writes:

In short, it is indisputable — and in other (perhaps less guarded) moments, Defendants themselves have not disputed — that the intent and credibility of Secretary Ross himself are not merely relevant, but central, to Plaintiffs claims in this case. It nearly goes without saying that Plaintiffs cannot meaningfully probe or test, and the Court cannot meaningfully evaluate, Secretary Ross’s intent and credibility without granting Plaintiffs an opportunity to confront and cross-examine him.

So there you have it. Judge Furman believes that Ross’s credibility is “central” to the case, and cannot be “meaningfully evaluate[d]” unless the Secretary is deposed.

This cuts, or should cut, both ways. If Ross’s testimony is so crucial that Furman was prepared make him the first Cabinet member deposed in nearly 20 years, it follows that, without the deposition, the plaintiffs and judge have inadvertently conceded that the case is substantially weaker.

But don’t hold your breath waiting for a ruling in favor of the administration.

When he denied the Government’s motion to dismiss last July, Judge Furman noted that the plaintiffs “identify several statements made by President Trump himself in the months before and after Secretary Ross announced his decision that, while not pertaining directly to that decision, could be construed to reveal a general animus toward immigrants of color. ”

Citing Trump’s statements is the loudest of all judicial dog whistles. He’s already given away the play.

I don’t think it’s possible or anyone to get this more wrong, Milhouse. First of all there were no states; slave, free, or otherwise, prior to the ratification of the Constitution. That, in effect, was what the 3/5s compromise was intended to produce; states.

In fact there was a fundamental difference between pro-slavery and anti-slavery forces throughout the thirteen COLONIES. Everyone agreed that women, children, aliens, and free white men who didn’t meet the property requirements to vote were at least human. The slave owners insisted that slaves weren’t human. The abolitionists insisted that they were. The slave owners only wanted their slaves to count as human one day every ten years. The abolitionists countered that if they weren’t human in the slave owner’s eyes the other nine years and 364 days than it made no more sense to count them as human one day every ten years than to count other beasts of burden such as horses, mules, and oxen.

The abolitionists wanted the slave owners to be forced to admit that slaves were human beings every day of every year. Which would have demolished the slave-holders’ arguments that propped up the whole edifice of slavery. Despite how either side felt, however, everyone knew that if they couldn’t form a union the British could easily come back and recover their lost colonies piecemeal. Hence the 3/5s compromise.

I don’t think it’s possible or anyone to get this more wrong, Milhouse.

Thank you for admitting that, Arminius. It’s mighty big of you. Though you could have saved yourself being wrong by simply not posting your comment.

there were no states; slave, free, or otherwise, prior to the ratification of the Constitution.

As you say, it’s impossible to be more wrong than that. Thirteen sovereign and independent states, not colonies, joined together in 1788 to form a union. Those states predate the union. The union is their creation. Remember, until the late 19th century “the United States of America” were always referred to in the plural; they were individual entities that were united, not one entity that divided itself for convenience into smaller administrative units.

You’re also wrong in your main point. It is simply not true that “the slave owners insisted that slaves weren’t human”. This did not happen. No supporter of slavery ever made such a claim. The slave states explicitly agreed that slaves were “persons”; nobody ever tried to claim that “person” in Article 1 section 9, or in Article 4 section 2, did not include slaves.