Walker still is hated by Democrats for his public sector union reforms, and they are going all out to defeat his reelection bid.

Oh what a night.

That was the post I wrote the day after Scott Walker defeated the recall effort against him in 2012:

What a night last night was.  It was as good as if not better than when Scott Brown won in January 2010.

Almost 20,000 people viewed the live feed during the 4 hours it was live.

I hope everyone enjoyed the fireworks display and music. We had fireworks firing off and exploding over the blog posts and music playing in the background, including John Philip Sousa’s Stars and Stripes Forever, Tchaikovsky’s 1812 Overture, Lee Greenwood singing God Bless The USA, and Kate Smith singing God Bless America.

We haz fireworks that night. 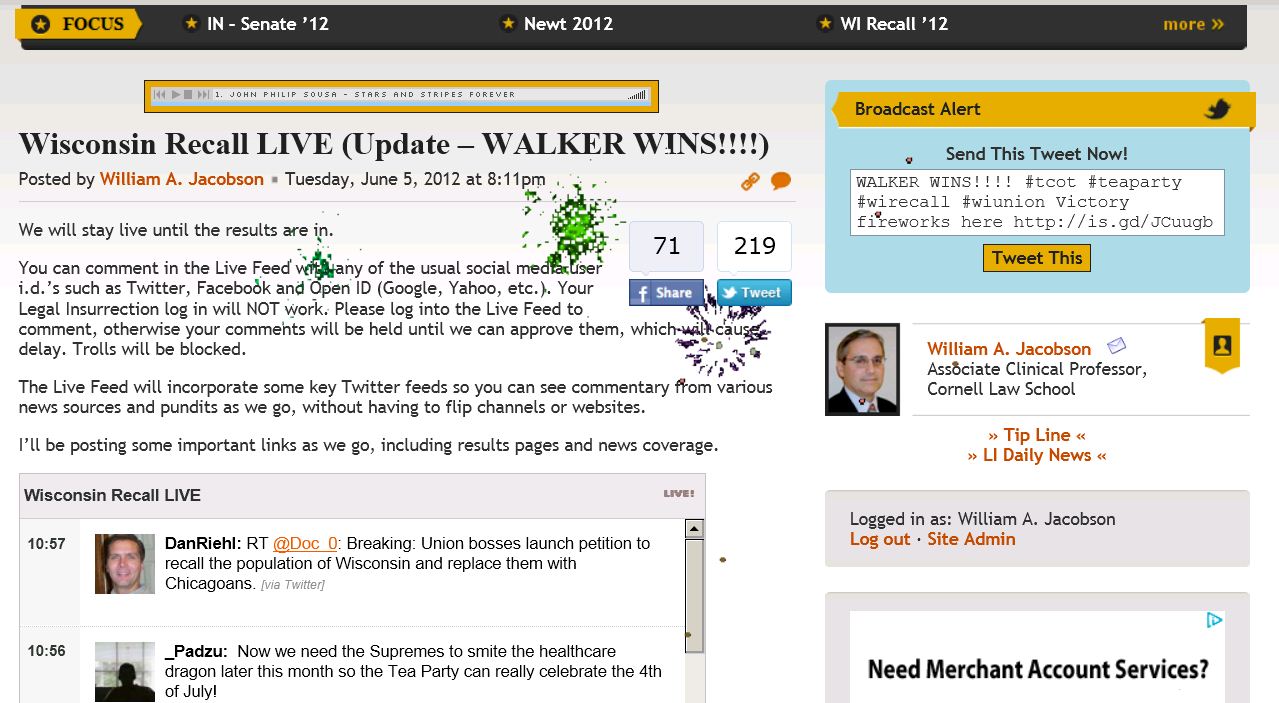 That recall victory for Walker came at the end of what I called Wisconsin’s long, strange trip:

Doesn’t every state have:

Still no idea what I’m talking about?

Scott Walker and the Republican legislature passed public sector union reforms, other than as to first responder unions, which had the effect of freeing state and local government from the iron grip of teachers and other public sector unions. It was a steel cage match, with national unions and Democrats throwing everything they had at Walker.

The intimidation tactics used by #TheResistance and Antifa now were tested during the Wisconsin anti-Walker protests.

The effect on public sector unions was long-lasting and devastating, as this 2017 Journal Sentinel analysis showed:

Nationally, no state has lost more of its labor union identity than Wisconsin since 2011, a Milwaukee Journal Sentinel analysis found. Union members made up 14.2% of workers before Act 10, but just 8.3% in 2015. That was nearly double the drop of Alaska, the runner up.

The decline has put Wisconsin, the birthplace of public-employee unions, near the bottom third of states for unionized workforce. Southern and western states make up most of the lowest tier.

On a practical — and political — level, labor has less money to boost Democratic campaigns, and a diminished pool of foot soldiers to offer.

Its muscle was not able to secure a Wisconsin win for Feingold, or presidential candidate Hillary Clinton.

Nor has it been enough to block Walker in three elections, or to stop the continued depletion of Democratic lawmakers in the state Senate and Assembly.

To labor leaders, Walker is the obvious villain, given his stated desire to conquer unions. In addition to Act 10, he signed a “right-to-work” measure blocking private employers and unions from requiring fees from workers.

Then came the prosecutors and the John Doe investigations, trying to take down Walker and conservative Wisconsin activists. In October 2016, I wrote, Can we finally stick a fork in Wisconsin John Doe?

Who’s the horror movie figure that keeps on popping up just when you think you’ve killed him?

That’s pretty much the nature of the anti-conservative witch hunt carried out under Wisconsin’s so-called John Doe law. Every time the investigation seemed to be beat, the investigating prosecutors would rear their ugly heads.

There was John Doe No. 1, investigating Scott Walker’s time as Milwaukee County Executive. They never came up with any wrongdoing by him. Then there was John Doe No. 2, regarding Walker’s alleged unlawful collusion with conservative groups during the recall election. It is John Doe No. 2 that has generated litigation over the past three years. In the end, every court that ruled on the issue found that the entire prosecution legal theory was legally unfounded — that even if these conservative groups did what they were alleged to have done, it was constitutionally protected speech and not illegal.

Lives were ruined over an attempt to punish constitutionally protected speech by conservatives.

Here are some key posts in our extensive coverage of the John Doe investigation reflecting the abusive tactics:

The evidence that has come out makes beyond a doubt that Walker was the target. Wisconsin AG Report: Govt election officials were “on a mission to bring down the Walker campaign and the Governor himself”.

Now Walker is in a tight race for reelection. A Marquette Law School poll released today shows the race tied:

A new Marquette Law School Poll of Wisconsin voters finds a tie in the state’s race for governor, with incumbent Republican Scott Walker and Democrat challenger Tony Evers each receiving 47 percent support among likely voters. Libertarian candidate Phil Anderson receives 3 percent, and only 1 percent say they lack a preference or do not lean to a candidate. One percent declined to respond to the question. Likely voters are defined as those who say they are certain to vote in the Nov. 6 election. In the most recent Marquette Law School Poll, conducted Oct. 3-7, Walker was supported by 47 percent, Evers by 46 percent and Anderson by 5 percent among likely voters…

It’s self-evident, but Marquette points out anyway, turnout will be critical:

The results for likely voters are based on the definition that the Marquette Law School Poll has used since it began in 2012: those who say they are certain they will vote in November. Alternative models of likely voters could be broader, including those saying they are less than certain to vote, or could include enthusiasm and attention to politics. Table 1 shows the vote for governor by alternative measures of likelihood of turnout averaging over certainty of voting, enthusiasm and attention to politics. Evers’ percentage of the vote generally rises when turnout is projected to be lower, while Walker’s vote percentage changes little in different projections of turnout.

Democrats are running a bland pro-union guy, hoping to make Walker the issue in the race and to bring out the Walker-hating Democrat base:

Little about Tony Evers feels like he’d be the one to slay the giant.

But with less than two weeks to go before people head to the polls, Evers — an unassuming Democrat running for governor in Wisconsin — is on the verge of doing something that has long eluded professional Democrats: Defeating Republican Gov. Scott Walker.
An average of polls shows Evers leading Walker in the final weeks of the campaign, causing Republican operatives in the state and in Washington to feel that 2018 is the best chance Democrats have ever had at taking down someone they have been longing to oust for years.
“I am the underdog,” Walker told CNN.

Why that’s the case is a more complicated question, given even the most ardent Democrats in the city’s most liberal enclaves see Evers, the superintendent of Wisconsin schools, as a less than exciting candidate. Democratic voters described him as “adequate,” “not very exciting” and someone lacking “a lot of charisma,” but then said they were “guaranteed” to vote for him because of their deep antipathy towards the governor.

Walker admittedly faces a series of unique headwinds. His near universal name recognition in Wisconsin has created a state full of hardened supporters and detractors, with only a few people in the middle undecided on him personally. He is also asking voters to back him for the fourth time in eight years, something even Walkers’ closest advisers admit is difficult. And he is running for a third-term in a year where Republicans nationally are facing backlash created by President Donald Trump’s presidency.

“People either love him or hate him,” said a top Republican operative. “So, this is the best chance Democrats have of beating him.”

This reelection bid is below the national media radar, compared to other governor races. But it’s critical. It’s an issue if the Walker revolution can survive, or will the unions regain control of state government.

Wisconsin, you don’t want to go back on the long, strange trip.

The Empire Strikes Back: The Revenge of the unions.

And especially the teachers unions. Much of the personal opposition to Gov. Walker seems similar to the opposition to Pres. Trump; that is, it’s “I don’t like that man!” emotionalism.

But the financial and institutional forces behind candidate Evers are the unions looking to re-instate their formerly guaranteed revenue streams, and the institutional power to re-prioritize public schools to better serve those who work there over the educational needs of students.

High stakes indeed. But is anyone paying attention?

I voted a straight red ticket here in Wisconsin. I cannot understand ANY working man or woman being stupid enough to vote for Evers. He promises to raise taxes. He talks of adding $1 tax per gallon to gas.

All we can do, our family is put our votes where our mouths, and hearts, are. We learned a long time ago that Walker haters don’t know the truth and don’t want to know the truth. They’re like Pavlov’s dogs – mention Walker and the hate emerges. It is sick.

I don’t “love” any politician. I try very hard not to “hate” any politician either although Hillary threatens my resolve often. But the hate some have for Walker is unbelievable and they seem willing to destroy our state to “get” him.

I’m sure that this will tweek a number of people, but what Walker, and the Republicans, did to the public sector unions, in Wisconsin, was nothing more than a move to destroy a Democrat funding asset.

In the first place, the “first responder” unions were supporters of Walker and the GOP, in Wisconsin. And, they were exempted from the new regulations placed upon the other public sector unions. In the second place, the State really has NO authority to regulate the contracting practices of local governments. It can regulate State contracts, but not local ones, unless there is fraud involved. Third, if The Dems ever regain control of the Legislature, they can reverse all of the anti-union regulations.

In traditional Right To Work state, public sector employees are allowed to collectively bargain on the same footing as their private sector counterparts. In Wisconsin, this is not the case, except for local law enforcement and fire employees, and state troopers and inspectors, who belonged to unions which supported Walker and the GOP.

“what Walker, and the Republicans, did to the public sector unions, in Wisconsin, was nothing more than a move to destroy a Democrat funding asset.

Citizens remain free to form and join labor unions, and to support these unions in any lawful manner. If it pleases you to fund this “Democrat funding asset,” you surely are free to do so.

It’s voluntary. As it should be.

And as Wisconsin residents may have noticed, school boards are now free to prioritize student needs above the demands of schools’ union employees, as work rules are now set by school boards (and not by union contract, as they once were). Why, school boards can even choose to buy employee health insurance from a vendor other than WEA-Trust (WEA = Wisconsin Education Association).

Freedom. Free to join the union, free not to join. And without paying “agency fees”! Free to be, you and me.

Perhaps Gov. Walker could have fixed the budget in some other way. But by doing it this way, he clawed back power from the public-sector unions that rightfully belongs to The People. Union members may work in public schools, but, it remains the public’s school. Not the union’s school.