Did Kavanaugh save Cruz? 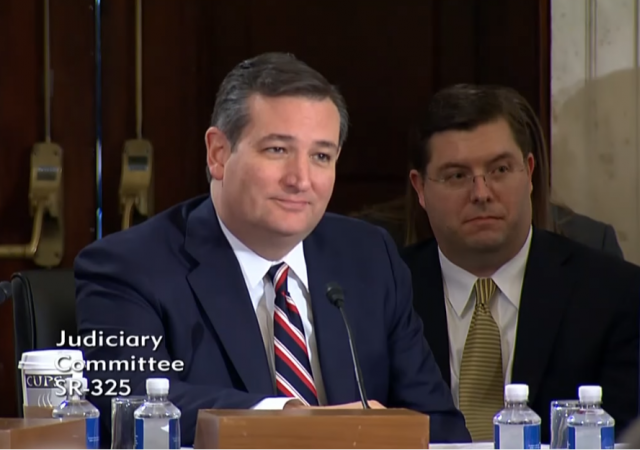 The most interesting part of this poll? It looks like more of the undecided voters have started to move towards Cruz. 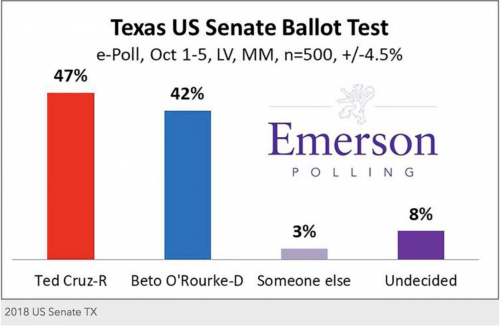 Professor Spencer Kimball of Emerson Polling said this on a podcast (emphasis mine):

“So that new poll in Texas, just coming out right now, has Ted Cruz at 47% and Beto O’Rourke at 42%. And if you’ll remember the last time we did this poll in August, Trump had his national rating underwater at negative 15. Cruz was tied with O’Rourke 39-38. This time, in that national poll we referenced earlier today, Trump’s numbers are now down by 7. So he’s made about an 8 point improvement.

We’re also seeing Cruz improving, really with those undecided voters. Last time 21% of the electorate was undecided. Well, as the election obviously comes closer people start making up their minds. Also, in our voter models, now that we are in that post-Columbus Day period where we’re in the unofficial home stretch of the election, we use a likely-voter model. So no more just registered voters, now you have to say that you are a likely voter. And that tightens up the undecideds as well.

But I also think that we’re seeing those undecideds moving towards Cruz because of what happened with Justice Kavanaugh. Voters in Texas favored the Kavanaugh nomination 46% to 41%. There is that 5 point magnitude, that difference between Kavanaugh having an in or not. And that’s the same difference we’re seeing between Cruz and O’Rourke, 47-42, that five point difference. So that’s something we have to ask: Is Cruz now peaking? Like what we said in August, was O’Rourke peaking, back in August? And obviously you want to peak on election day, get the most buzz at that point.

It looks like Cruz standing with Supreme Court Justice Brett Kavanaugh during the fiasco may have saved him. The professor noted that O’Rourke name recognition went up to 50%. Cruz used to have a 38-44 negative rating, but is now at 48-44.

RealClearPolitics had the race as a Toss-Up, but recently changed it to Lean Republican. After all, the latest polls (not just Emerson) have Cruz up on O’Rourke. A CBS News/YouGov poll from October 2 to October 5 shows 50% of the respondents choosing Cruz while only 44% chose O’Rourke. Only 2% chose someone else and 4% said not sure. 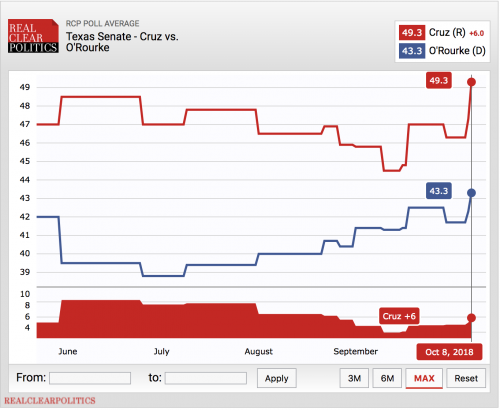 Whatever margin Abbott wins by Cruz will win by at least 2/3 ‘ s of that.

But, but, Beto’s gonna win because he’s going to get the votes of evangelical white women. The NY Times says so because they interviewed three of them today.

No doubt he will get all the Beto males

Master Beto MAY get the votes of the beta males, but I suspect that’s about all the votes he will get on the male side. Texas women tend to prefer men who act like men, not soy boys like Master Beto.