Law of Self Defense: Media Mangles “Stand-Your-Ground” Law Yet Again

Law of Self Defense: Media Mangles “Stand-Your-Ground” Law Yet Again

The Media on the Subject of “Stand-Your-Ground”: Never Uncertain, but Always Mistaken 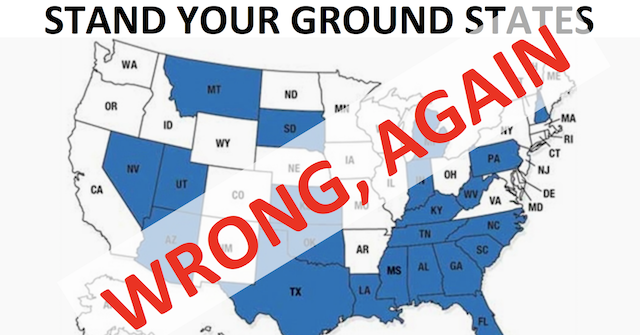 A recent example came across my desk this week from a publication named “Black Voice News,” in an article you can find by clicking here.

Errors in Actual Application of “Stand-Your-Ground”

First, the article mischaracterizes the number of states that actually apply “Stand-Your-Ground,” if by “Stand-Your-Ground” we mean that there is no legal duty to retreat imposed on a non-aggressor,  who is facing an imminent threat of deadly force attack, which is the only legally correct definition.

The map is badly mistaken.

In fact, only a minority of 14 states impose a legal duty to retreat before deadly defensive force may be used by a non-aggressor to defend against an imminent deadly force attack.

Errors in Characterizing the Legal Doctrine of “Stand-Your-Ground”

The article then goes on to grossly mischaracterize what “Stand-Your-Ground” is and does. The author writes, for example:

In essence, “stand your ground” laws provide an escape clause from criminal prosecution for individuals who kill another person.

All “Stand-Your-Ground” jurisdictions are saying is that if you are the innocent victim of an imminent deadly force attack, you are legally entitled to use deadly defensive force if necessary to save your life, and the state won’t put you in prison for the rest of your life simply because you failed to take advantage of a purportedly safe avenue of retreat as you were fighting for your life.

The minority of 14 “Duty-to-Retreat” states, on the other hand, reserve the right to put you in prison for the rest of your life even if you are the innocent victim of an imminent deadly force attack, and manage to survive at the cost of your attacker’s life, if they can convince the jury that you could have safely escaped while fighting for your life.

Numerous Other Errors in Logic and Reasoning

As usual with these types of propagandistic articles, it is also loaded with plenty of other errors in logic and reasoning. For example, the author writes:

The Center for American Progress also reported recently that in states like Florida for example, that implemented “stand your ground” in 2005, gun violence in the state experienced a 20 percent increased—a near two decades high.

Assuming that “gun violence” is always a “bad thing” is childish thinking, and not even that of a very bright child.

These laws provide legal license for the killing of Black men as they are more likely than any other demographic to become victims of “stand your ground” killings.

First, “these laws” provides no “legal license” for the killing of anyone, as already described. Second, there’s no credible evidence to support this claim that “Black men” are more likely than any other demographic to become “victims” of “Stand-Your-Ground killings.”

Even if we were to assume that latter claim were true, it’s only half the relevant question. Might it not also be true that “Black men” (I would suggest Black people generally) are more likely than any other demographic to benefit from the increased scope of lawful self-defense allowed for by “Stand-Your-Ground?” After all, are not most victims of black criminals also black people who are defending themselves against this criminal predation?

As always, it pays to know what the law of self-defense actually is—based on actual statutes, court decisions, and jury instructions, and taught by a genuinely knowledgeable source—rather than to rely on the scribblings of a “journalist” with little understanding of the subject matter, and particular not the type of “journalist” with a propagandistic agenda.

Fortunately, you’re in luck—quality education on the actual law of self-defense is readily available from, you guessed it, the Law of Self Defense. Check out the free content at the links in my signature for a good, no-cost start.

Law of Self Defense, Stand Your Ground

Interestingly, they would seem to suggest that Colorado has a “Make my Day” law, but no “Stand Your Ground” law overriding the duty to retreat. Not sure how they think that is supposed to work. Do you need to be retreating when you use deadly force against intruders in your home?

The reality is that these people should be required to read AB’s book before opening their mouths on this subject that they obviously know little about.

In fact, only a minority of 14 states impose a legal duty to retreat before deadly defensive force may be used by a non-aggressor to defend against an imminent deadly force attack.

I’m confused. How can one retreat from an aggressor who is about to imminently use deadly force? A bullet travels much faster than I can run.

Not all aggressors use guns.

And not all would-be victims are on foot.

Also there may be shelter one could safely take.

Be careful son, or Nelson’s going to clock you one. He’s a bully.

It is a Sisyphean task to educate the public on the law of self-defense when there is so much mis/disinformation put out there. Keep up the good work Andrew.