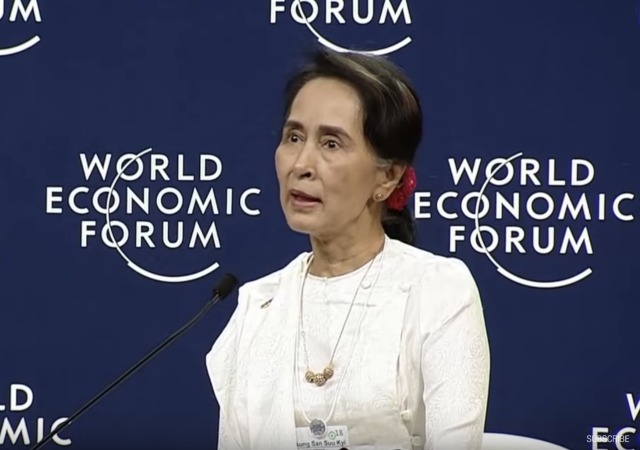 Earlier this month, a Myanmar court sentenced two Reuters journalists to seven years in jail after they exposed the human rights abuses by the Myanmar military on the Rohingya minority. The judge claimed the two men “collected and obtained confidential documents.”

Aung San Suu Kyi won the hearts of everyone as a political prisoner when she pushed for democratic reforms in Myanmar when the military controlled the country. She won the Nobel Peace prize in 1991 for her efforts.

I guess she never shed the prejudice against Rohingya. I’ve been doing my best to document the genocide against the Rohingya people and have slammed Aung San Suu Kyi for her silence and deflection. Many other Nobel Peace Prize winners have turned against her, too.

I also guess she has changed her mind since the two journalists exposed wrong doing by those who surround her. From Al-Jazeera:

“They were not jailed because they were journalists, they were jailed because … the court has decided that they have broken the Official Secrets Act,” Aung San Suu Kyi said at the World Economic Forum (WEF) on ASEAN in Hanoi on Wednesday.

“I wonder whether many people have actually read the summary of the judgement which had nothing to do with freedom of expression at all, it had to do with an Official Secrets Act,” said Aung San Suu Kyi.

“If we believe in the rule of law, they have every right to appeal the judgment and to point out why the judgement was wrong.”

“The case has been held in open court and all the hearings have been open to everybody who wished to go and attend them and if anybody feels there has been a miscarriage of justice I would like them to point it out,” she said.

There’s one problem with her statement. Jailed journalist Kyaw Soe Oo claimed that “interrogators ignored the documents that he and Mr. Wa Lone had been accused of obtaining and focused instead on their reporting.” Questioning finally came to an end after the authorities found the photos of those 10 males on their phones. That’s when “one of the officers barged into his cell and asked, ‘Why didn’t you tell us about this?’”

Reuters reported that a “police witness testified the restaurant meeting was a set-up to entrap the journalists to block or punish them for their reporting of a mass killing of Rohingya Muslims in Rakhine.”

Aung San Suu Kyi continued to shoot herself in the foot as she said she believes the Rohingya situation could have been handled differently. From The New York Times:

“There are, of course, ways in which, with hindsight, we might think that the situation could have been handled better, but we believe that for the sake of long-term stability and security, we have to be fair to all sides,” Ms. Aung San Suu Kyi said in a rare appearance at an international forum, in Hanoi, the Vietnamese capital.

Since August of last year, more than 700,000 Rohingya Muslims have fled to neighboring Bangladesh amid a frenzy of executions, rapes and village burnings in the north of Rakhine State in Myanmar. International human rights groups have extensively documented the way Myanmar’s military organized the bloodshed, in which at least 10,000 people were killed, according to a United Nations estimate.

But Ms. Aung San Suu Kyi declined to criticize what she delicately referred to as “the military aspect” in her talk at the World Economic Forum on Asean. Instead, she chastised the international community for not focusing on violence carried out by armed Rohingya militants against members of other ethnic and religious groups in Rakhine.

“For the government, we have to be fair to all of them, even if the rest of the world is not interested,” Ms. Aung San Suu Kyi said on Thursday.

Her government has not said how many non-Rohinyga have been killed over the past year in Rakhine, but numbers from local officials suggest that the total figure is somewhat higher than 50.

How about your government and military not go all genocidal on the Rohingya people? Aung San Suu Kyi seems to forget that the Rohingya only retaliated after being attacked and not to mention the fact that they’re literally treated like second class citizens in a country that views them as non-humans. Disgusting attitude for someone who won a Nobel Peace Prize for her human rights work.

This makes me sick.

Many other Nobel Peace Prize winners have turned against her, too.

Oh, I can’t wait to hear what Yasser Arafat, Al Gore, President Peanut, and Barry Obama have to say about it.

We should’ve known she was a bad apple when Hillary gushed over her.