State Party distances itself, the outlets are swamped with customers, and Alabama tries to poach the burger chain 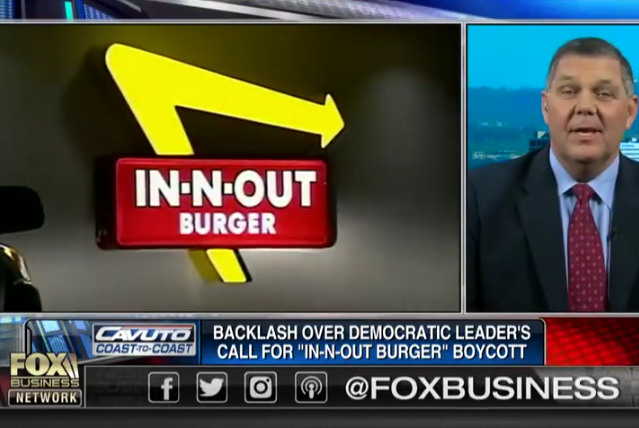 In-N-Out Burger is a California institution. In fact, my family recently capped off a college tour of that state, and we all ordered Double Double meals!

Yet after it was discovered that the business committed the Democratic Party designated sin of donating to the Republican Party for the upcoming election, the chair of the California Democratic Party thought the smart move was to call for a boycott.

In a statement Thursday, In-N-Out Burger’s executive vice president Arnie Wensinger said the company “has made equal contributions to both Democratic and Republican Political Action Committees in the State of California” in 2018.

Eric Bauman, the chairman of the California Democratic Party, took to social media Wednesday night to call for a boycott in response, writing, “Et tu In-N-Out?”

Nevermind the fact that the chain also donated $50,000 this year to Californians for Jobs and a Strong Economy, a pro-business, political action committee founded by Democratic operative David Townsend.

This was a chance for a Democratic Party elite to nail a conservative business, demean the non-elite customer base, and create some social media attention for himself!

The results were predictable to anyone who has been following the real news since November 2016.

First, the boycott met with its own #Resistance among regular Democratic Party supporters.

Anthony Grigore is a Democrat. But as he waited Thursday at an In-N-Out Burger in El Segundo for his meal, Grigore made it clear party loyalty would only go so far.

….“Eating at In-N-Out is such a standard thing to do across California,” Grigore said, dismissing the boycott idea as a bit silly.

Next, the state Democratic Party distanced itself from the boycott demand.

His Thursday tweet calling on Democrats to boycott the In-N-Out burger chain because of the contributions the company has made to Republicans stirred up a rash of jokes, complaints and other responses that left state party officials quickly backing away from their boss.

Now, other states are trying to poach In-N-Out Burger business!

An Alabama state senator has invited the California-based In-N-Out hamburger chain to his state after some California Democrats called for a boycott of the chain over donations made to the state’s GOP.

Nearly every conservative I know was planning to head to In-N-Out Burger in a show of support this Labor Day Weekend.

Hi #liberals this is In n out today. You’re driving their business through the roof! Just like you’re the biggest AR-15 sellers of all???? #InNout #innoutburgers #innoutboycott #InNOutBurger pic.twitter.com/aya10X66Gt

I haven’t had a burger from #InNout in ages – mostly because of convenience, bad timing, and dietary restrictions. But I’m going to give myself a treat this #LaborDayWeekend #LaborDayWeekend2018. Hope this pisses-off the democrats. #FreeSpeechForAll #FreeSpeech #Freedom #USA pic.twitter.com/xM8iDR7hk8

My In & Out cheeseburger was delicious today…and, I bought a In & Out t-shirt today! pic.twitter.com/Foycv2xywX

The Democrats and their media minions keep insisting that a #BlueWave is going to strike the nation in November. The data I am collecting, including this response, show that it will be a #RedNovember instead.

Guess what I am going to have for dinner tonight!

When you look at the CA Democratic Party leadership, they were all born outside of CA except for Jerry Brown. Bauman (nephew of Sha Na Na’s Bowser) grew up in the Bronx and has been an ultra-left wing whack job forever. We needed a border wall to keep out all of the crazy New Yorkers decades ago. I wonder if his “husband” put him up to this.

For Bauman to call for a boycott of In-N-Out is beyond tone deaf. He was just looking for another chance to attack a Christian institution without doing his homework. Lazy, ignorant, bitter, pervert. Why not boycott the Golden Gate Bridge? Or Yosemite?

Where are the Republicans? I hope Trump campaigns hard for John Cox for governor. His being on the ballot despite a jungle primary is no fluke. The polls are wrong. Californian politicians might be crazy but outside of LA and SF, most citizens are not THAT crazy.

California isn’t the California I grew up in (born on a Navy base in SoCal in the mid-70s). Not even the unusually conservative San Diego I grew up in is the same… overrun by the perpetually butthurt & illegals.

Hence why I left in 98 (enlisted in the Army). Now I live in a nearby state being overrun by the self-same perpetually butthurt & illegals from the People’s Republic of California.

I’ll be heading to AZ myself in the not-too-distant future. Staying away from Phoenix and anywhere east or south.

Ca Republicans need to select one candidate to run in the primaries so that that will have a better chance of winning elections.