No Manafort verdict Monday, but the jury did order lunch for Tuesday

No Manafort verdict Monday, but the jury did order lunch for Tuesday

If Manafort is found Not Guilty on all charges, anti-Trump heads are going to explode in a simultaneous combustion not seen since about 1.30 a.m. Eastern on November 9, 2016 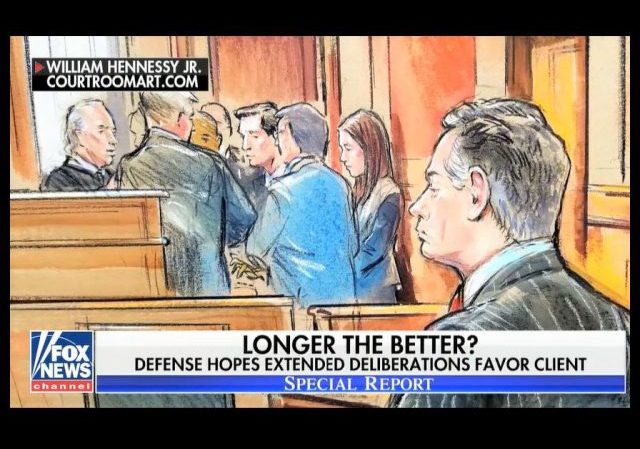 No verdict to day in the Paul Manafort case.

The jury deliberated a little later than usual, until about 6:15 p.m., but then adjourned to resume tomorrow.

The media and social media frenzy is building.

Excitement filled the media ballpen when the jury sent a note to the judge. But alas, it was just tomorrow’s lunch order:

On the news that the jury hadn’t reached a verdict, Manafort attorney Kevin Downing told reporters, “Mr. Manafort was happy to hear that and thinks it was a very good day.”

Defense attorneys generally see long deliberations as an indication that jurors disagree about their clients’ guilt or have substantive concerns about complicated legal aspects of the case, which could lead to a hung jury, or that they have avoided rushing to judgment. But experts have cautioned that the case against Manafort is complex, and that jurors could simply be taking their time.

The whirlwind trial is the first to result from Special Counsel Robert Mueller’s ongoing investigation into Russian election meddling, although Manafort’s prosecution does not relate to any election interference or alleged collusion by the Trump team with Russian officials.

A source close to the Manafort defense team told Fox News that after days of deliberations, the proceedings have taken on the feel of the run-up to the 2016 election, in which everyone had been suspecting things to go one way, only to be surprised by the outcome.

In this case, the defense team has been pleased that pundit predictions about a quick guilty verdict haven’t panned out.

Unlike in the morning, as the jurors entered the courtroom in the evening, they seemed to turn away from both the prosecution and defense, avoiding eye contact. The jurors, with a few exceptions, seemed flat and drained.

Earlier on Monday, Downing said he and Manafort remained confident, and that Manafort was “doing very well.”

Seriously, what’s the point of defense counsel exuding confidence and spinning to the media?

Or as Hillary would say, what difference, at this point, does it make?

The topic of the media request for juror names and addresses continues to stir We covered the request last Friday, and why it was dangerous in this social media mob environment:

In a case such as this, that could be seen as an act of media intimidation — the jury is not sequestered so they certainly would hear about it. In an environment of online mobs and CNN having threatened to doxx a gif maker who mocked CNN, the jurors rightly would be concerned if the judge released their personal information to the media.

That’s not to say these same media outlets won’t take it on themselves to out the jurors, particularly if there is a not guilty verdict, but the judge wasn’t going to make it easy for them.

Byron York had a good Twitter thread on it:

In that case, doxxing seems inevitable if jurors’ names become public. That’s why media request was troubling. One thing for jurors to come forward, speak voluntarily. Another to have court reveal their identities…

Either way, journalists, freelance Resistance types will search for jurors’ names. And then: Have they ever posted anything objectionable on social media? Have their children? Relatives? Any questionable online associations? 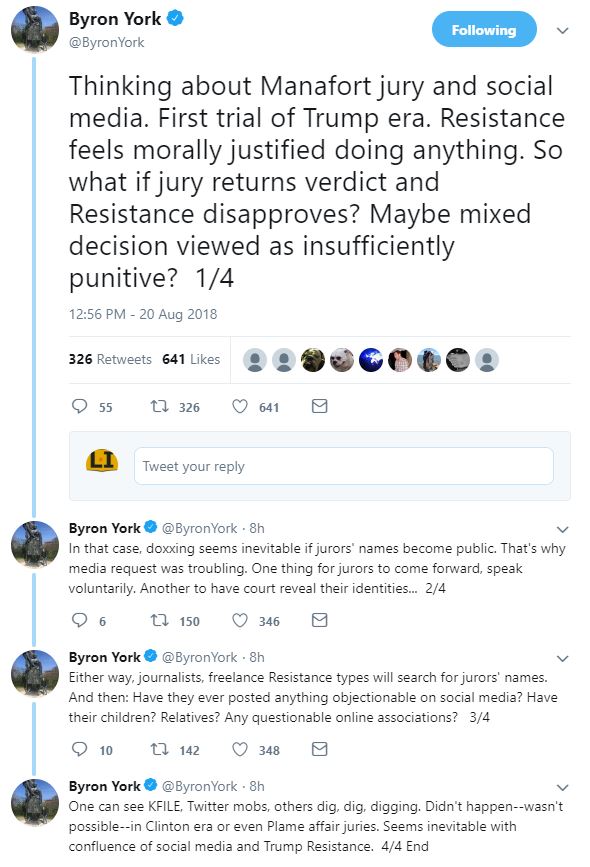 Having read a lot of Twitter reactions as the day went on, there is only one prediction I can make with certainty:

If Manafort is found Not Guilty on all charges, anti-Trump heads are going to explode in a simultaneous combustion not seen since about 1.30 a.m. Eastern on November 9, 2016

Given the nature and locale of the jury pool, my guess is that they are simply milking the deliberations for more free lunches.

The movie will be called ‘Escape From the Swamp’. This is a jury from the DC suburbs. They will find him guilty and haul ass. Just a hunch. They want to get out of their with their hides.

I just heard the jury is deadlocked on all counts. Allen charge soon? It is hanging it appears. I hear they can not reach verdict on any count. There must be some Americans on that jury if this is accurate.. Hot Damn!

The thing I dislike the most about this is if you read any article about the trial they always mention trump no less than 5 times and he has absolutely nothing to do with it.

Listening to the talking heads on FNC, they obviously haven’t a clue about how Jury Trials work. They are speculating about what a jury question regarding a potential failure to reach concensus on one count means. It seems that they have never heard of a jury failing to convict on all counts in the indictment. They are talking about a “partial verdict”, what the Hell is that? Had a case appealed to the Fifth Circuit on a basis (IIRC, it was 1980) that the Jury didn’t give due consideration to the defense presentations. The Appeals Court determined that the Jury had given careful consideration of the charges because they found the defendant Not Guilty on almost a fifth of the counts. The only time a Jury must reach consensus on all counts of an indictment is when it is a one count indictment or the Jury Instructions inform them that the counts are so interrelated that a Not Guilty of a certain count means the defendant can’t be guilty of the other(s) and that is very rare.

My bet is they have verdicts and want to escape. They just do not know how to fill in the form. no telling what the verdicts are yet.

I would be surprised if they hung on only one of 18 myself. It would not make any sense. But then again……None of this makes any sense to me.

Oh My. Judge will use Sawyer to resond to jury.
Conclusion:  Scheme to Deprive of Honest Services
Ellis is awesome. Will hit em’ with sawyer

The jury was permitted to find the first element of mail and wire fraud, the scheme to defraud, upon proof that either the gift statute or the gratuity statute was violated.   The gift statute as charged, however, was a legally insufficient basis upon which to find the scheme to defraud.   Although the gratuity statute was properly instructed in terms of honest services mail fraud, we cannot tell if the convictions were based on that statute or the insufficiently charged gift statute.   When a jury has been presented with several bases for conviction, one of which is legally erroneous, and it is impossible to tell which ground the jury convicted upon, the conviction cannot stand.  United States v. Nieves-Burgos, 62 F.3d 431, 435-36 (1st Cir.1995).