“I said it was nothing short of treasonous. I didn’t mean that he committed treason.” 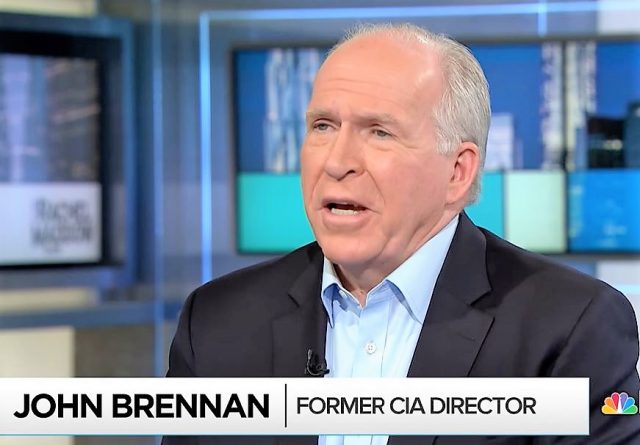 Former CIA Director John Brennan has been suggesting for months that he has undisclosed information implicating Donald Trump in wrongdoing.

Former CIA Director John Brennan, who is as anti-Trump as they come, suggested that he knew information about Trump that was not yet public. Information, of course, he would have learned in his role at the CIA or through his connections:

When the full extent of your venality, moral turpitude, and political corruption becomes known, you will take your rightful place as a disgraced demagogue in the dustbin of history. You may scapegoat Andy McCabe, but you will not destroy America…America will triumph over you.

This is chilling stuff. Our intelligence services scoop up an incredible amount of information about all of us. There are limits on how it is supposed to be used, but when the former Director of the CIA suggests that there is undisclosed information about a President, it’s an abuse of power and a not-so-veiled threat.

Brennan recently had his security clearance revoked, Senator Rand Paul suggested the move to Trump and supported it:

“I applaud President Trump for his revoking of John Brennan’s security clearance. I urged the President to do this. I filibustered Brennan’s nomination to head the CIA in 2013, and his behavior in government and out of it demonstrate why he should not be allowed near classified information. He participated in a shredding of constitutional rights, lied to Congress, and has been monetizing and making partisan political use of his clearance since his departure.”

A part of Brennan’s irresponsible actions was his accusation Trump engaged in conduct that was “nothing short of treasonous” after the Trump-Putin summit in July: 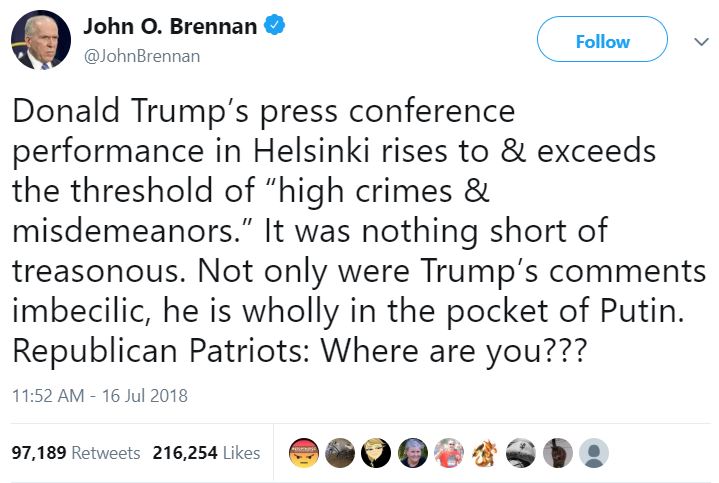 Depending on who you ask, Brennan either doubled-down on that accusation of treason, or walked it back, in an interview with Rachel Maddow:

Here’s what Brennan said, in an interview with Rachel Maddow (transcript)(emphasis added):

MADDOW: – …. Your criticism of President Trump is – rises above that type. Despite what you just articulated here. You’ve gone further than that. After Helsinki, you were stark and even a little bit scary in your criticism of his behavior. You said it rose to treason.

BRENNAN: I said it was says nothing short of treasonous.

MADDOW: In this current controversy, that specific comment has been singled out by a number of people as a comment that may be by you crossed the line. That was maybe in –

MADDOW: No, I’ m not saying that you don’t have a right to say it. But do you stand by that consideration and can you explain? Can you elaborate what you mean by treasonous? It’s a very serious allegation.

BRENNAN: I know what the Russians did in interfering in the election. I have – you know, I’m 100 percent confidence in what they did.

And for Mr. Trump to stand on that stage in Helsinki, with all the world’s eyes upon him and to basically said he wouldn’t – he doesn’t understand why would the Russians interfere in the election, he’s given Mr. Putin, the Russians, a pass time after time after time, and he keeps referring to this whole investigation as a witch-hunt, as, you know, bogus, as you know – and, to me, this was an attack against the foundational principle of our great republic, which is the right of all Americans to choose their elected leaders.

And for Mr. Trump to so cavalierly so dismiss that, yes, sometimes my Irish comes out and in my tweets and I did say that it rises to and exceeds the level of high crimes and misdemeanors and nothing short of treasonous because he had the opportunity there to be able to say to the world that this is something that happened. It should never, ever happen, again. And if Russia tries at all to do it, they’re going to pay serious price for it.

I don’t expect Mr. Putin to acknowledge it. He is – you know, he’s going to deny, deny, deny. But for the president of the United States to continue to prevaricate on this issue, I think, does a great injustice and a disservice to the men and women of the intelligence law enforcement community and does a great disservice to the citizens of the United States.

MADDOW: But you didn’t mean that he committed treason, though?

BRENNAN: I said it was nothing short of treasonous. That was the term I used, yes.

MADDOW: That’s the – if we – if we diagram the sentence, nothing short of treasonous means it’s treason.

MADDOW: – serving a foreign country rather than our own.

BRENNAN: Well, yes. I think he has crossed the line repeatedly in terms of his failure to fulfill the responsibility of the office. And to look Putin square in the eye and say, this should never, ever happen again.

MADDOW: Do you think that he is knowingly serving the interest of the Russian government instead of the U.S. government?

BRENNAN: You know, I scratch my head a lot. I’m puzzled over why Mr. Trump acts this week with such obsequiousness to Mr. Putin. I don’t – I don’t know. And I’m not going to try to pretend that I know.

But there is something that is very disconcerting, very worrisome about how an individual who occupies the Oval Office interacts with Mr. Putin.

I’m a great advocate of improving relations between Moscow and Washington, don’t get me wrong. I was a strong supporter of that during the Obama administration. And I went – I stuck my neck out a number of times particularly on Syria to say, no, we need to be able to work with the Russians to be able to bring this mass carnage to a halt.

But time after time, the Russians, you know, would feign sincerity better than anybody I’ve ever know, but I do believe we need to get this behind us. I don’t want this to, you know, roil the waters forever. But we need to have a president who is going to acknowledge this and make sure that he is able to then move on.

It was one thing for the chorus of #TheResistance to make such an outlandish accusation of treason, it is another thing for the former CIA Director who at the time maintained a security clearance that potentially gave him access to information unknown to the public. That access gave an undeserved credibility to Brennan’s punditry and political posturing.

As shown above, Brennan dangled his access to national security information out before for political purposes. He won’t be able to do that anymore.

“BRENNAN: I know what the Russians did in interfering in the election. I have – you know, I’m 100 percent confidence in what they did.”

And I don’t know what’s worse that you are a corrupt liar, or that a former CIA Director is such a *poor* liar.

I just saw the Yahoo spin. “Brennan doubles down on ‘treasonous’ claim” No mention of backing off “treason” at all.

His status with the left is safe. He can breathe easy.

Brennan is such a lying sack of crap. I love it when he has to eat his own words. This political hack should never have been made the head of the CIA. Muzslime scumbag.