Prepared the battlefield to reshape the judiciary, and now executing the plan to liberal howls. 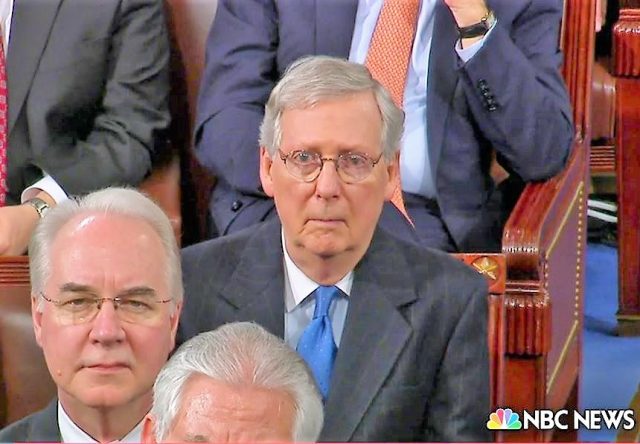 You remember the phrase: “own a lib”?

It was a hot topic not long ago after Nikki Haley cautioned high school conservatives not to make “owning the libs” the focus of their activism. I respectfully disagreed, ‘Owning the libs’ in the defense of liberty is no vice.

Is Mitch McConnell a master at owning the libs?

Comfortably Smug on Twitter thinks so, referring to him as “the Michael Jordan of owning the libs,” based on McConnell’s latest move to ram through — I mean quickly process confirmation votes on — a large group of judicial and other nominees to overcome Democrat delay tactics: 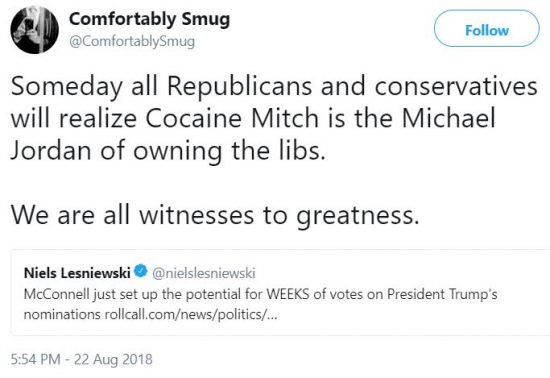 McConnell’s maneuvering around Democrat obstruction on judicial nominees has been mostly successful, but it hasn’t been easy. We’ve been covering the struggle and the stakes involved since even before the Inauguration. Trump has the opportunity to remake the federal judiciary, and Democrats were slow to wake up to that reality. McConnell couldn’t have done it alone – he’s had a lot of help from Chuck Grassley, Chair of the Senate Judiciary Committee who has marshaled nominees through the hearing process.

Here are some of our prior posts:

While Trump has lagged behind other presidents in political appointments, the streamlining of the judicial-selection process has helped him deliver a historic number of judges to the federal bench. In 2017, the Senate confirmed 12 of Trump’s appeals court picks — the most for any president in his first year in office. This year, the Senate has already confirmed 12 appellate judges and, according to a Republican Judiciary Committee aide, hopes to confirm at least four more. The White House refers to every new batch of judicial appointees Trump selects as “waves” — in early June, it announced the “Fifteenth Wave of Judicial Nominees”— as if they’re soldiers landing on the beaches of Normandy.

… representative of Trump’s judicial appointees are judges like James C. Ho. Born in Taiwan, Ho moved to the United States as a toddler. He graduated from Stanford and the University of Chicago law school before going on to clerk for Clarence Thomas at the Supreme Court. After working in George W. Bush’s Justice Department, he succeeded Ted Cruz as Texas solicitor general. Ho is as pure a product as exists of the conservative legal movement created by the Federalist Society….

In short, a radically new federal judiciary could be with us long after Trump is gone. Brian Fallon, a veteran Democratic operative who leads Demand Justice, a group formed to help Democrats with research and communications in the judicial wars, says, “We can win back the House this November, we can defeat Trump in 2020 and we’ll still be dealing with the lingering effects of Trumpism for the next 30 or 40 years because of the young Trump-appointed judges.”

And if Trump is re-elected? Newt Gingrich, who during the 2016 campaign began emphasizing the importance of judges to Trump, posits: “He could, by the end of his time in office, be the most important president since Franklin Delano Roosevelt in shaping the judiciary.”

The impact already is being felt. The Los Angeles Times laments that Federal judges appointed by Trump are starting to leave their mark:

Trump’s total of 22 successfully appointed appeals court judges — as of last month — is more than either of the last two presidents at this point in their terms, according to an analysis last month by the Pew Research Center.

“The real kind of big news is the sheer amount of change that’s happening on the court of appeals,” said Harsh Voruganti, founder and editor of the Vetting Room, a website that tracks judicial appointments. “I think we’re going to see a fair amount of change in jurisprudence.”

Trump’s success, both achieved and anticipated, in reshaping the judiciary was one of the reasons I dialed back the Dread Clock:

We are used to losing institutions. The left is not. They are waking up to the possibility that the judiciary may be restored to the neutral role it should play, and would no longer serve as a liberal super-legislature.

The reclaiming of the federal judiciary, particularly the Supreme Court, is why the Dread Clock now stands at 5 minutes before midnight.

So how does this make McConnell “the Michael Jordan of owning the libs”? This latest move is what inspired the comparison, via Roll Call, Senate Could Be Tied up For Weeks Voting on Trump Nominees:

The move sets up the potential for weeks of virtually continuous sessions of the Senate, although it is more likely that a bipartisan agreement will be reached at least ahead of the long Labor Day weekend.

The list of 17 nominees is highlighted by Richard Clarida to the Federal Reserve and a slew of Trump nominees to fill federal judgeships in seats across the country.

If senators were to object to time agreements, the Senate could literally spend weeks doing little other than considering the nominations, a move that complicates much of the legislative agenda for the rest of the year, particularly when it comes to finishing consideration of government spending bills before the end of the fiscal year on September 30.

Most of the judicial nominees at issue in this latest wave are for District Courts. That’s a change because most of the focus to date has been on Appeal Court nominees. Appeals Court nominees obviously are hugely important, since they effectively are the last word on most disputes since the Supreme Court takes so few cases. But District Courts are also important, as we have seen with a series of decisions interfering with Trump’s executive authority through nationwide injunctions.

Despite this success, there is a lot more work to be done. Alex Swoyer at The Washington Times reports:

As of the beginning of August, Mr. Trump had won confirmation of 347 nominees, but 170 were still in the pipeline awaiting votes.

Republicans have put a particular focus on filling out the federal judiciary with the president’s picks. They’ve confirmed one Supreme Court justice, 26 circuit court judges and 26 district court picks.

Eight circuit nominees are still pending, as are more than 70 district judge nominees.

Democrats don’t have the power on their own to defeat nominees, given the changes they made in 2013 to filibusters. But they have erected unprecedented roadblocks, forcing Republicans to use the maximum allowed time on many of the president’s picks.

Mr. McConnell responded by canceling the summer vacation, forcing lawmakers to be in town to make progress on nominations.

So again, has McConnell owned the libs?

The libs seem to think so:

While much of the focus has been on Kavanaugh and Justice Neil M. Gorsuch, the Senate’s rapid approval of appellate judges is likely to have its own broad impact on the nation, as the 13 circuit courts will shape decisions on immigration, voting rights, abortion and the environment for generations.

For McConnell, this is the culmination of a years-long gambit that started with stymieing President Barack Obama’s judicial nominees, most notably Supreme Court choice Merrick Garland, and creating a backlog of vacancies on the nation’s highest courts.

Trump’s 2016 election enabled McConnell (R-Ky.) to cement a legacy of judicial confirmations that is likely to be felt long after the two men leave office.

No, he ain’t.
He is back stabbing swamper.
Don’t ever ever credit his actions with honor.

So mcconnell does his job every now and then. Most time he doesnt.

Give him Odumbo’s nobel prize.

Democrats have themselves to blame. Remember who voted to put the Nuclear Option into effect. It was not the Republicans, but it was the greedy left trying to remake the judiciary. Now it looks like they may have again opened a door, smacking themselves in the face with it. Way to go, leftists! As the saying goes, every leftist plan yields the opposite result.