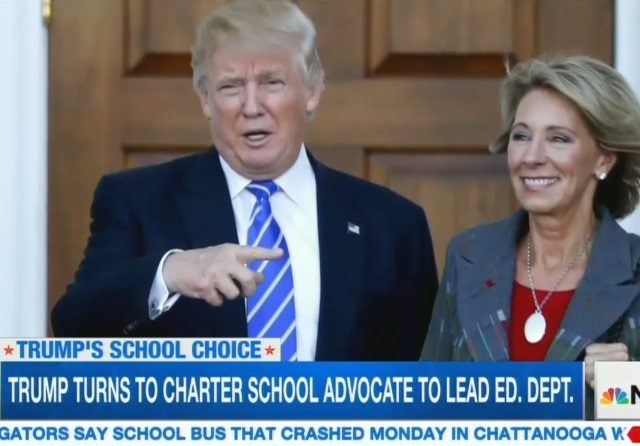 The Trump administration will encourage the nation’s school superintendents and college presidents to adopt race-blind admissions standards, abandoning an Obama administration policy that called on universities to consider race as a factor in diversifying their campuses, administration officials said.

In a pair of policy guidance documents, the Obama Education and Justice departments told elementary and secondary schools and college campuses to use “the compelling interests” established by the court to achieve diversity. They concluded that the Supreme Court “has made clear such steps can include taking account of the race of individual students in a narrowly tailored manner.”

That document states, “The Department of Education strongly encourages the use of race-neutral methods for assigning students to elementary and secondary schools.” …

The Trump administration’s plan would scrap the existing policies and encourage schools not to consider race at all. The new policy would not have the force of law, but it amounts to the official view of the federal government. School officials who keep their admissions policies intact would do so knowing that they could face a Justice Department investigation or lawsuit, or lose federal funding from the Education Department.

The investigation into and lawsuit regarding discrimination against Asians at Harvard highlights how the Trump administration is aligning itself with a total non-discrimination policy in education.

Racial discrimination in the name of diversity has become so fundamental a part of the ethos of higher education that university administrators and activist groups will not let it go easily.

Add it to the list of liberal fears now that Trump gets to nominate a successor to Justice Anthony Kennedy, and possibly others in the coming years:

In total, the DOJ scrapped guidance on 24 policies affecting topics like education, housing finance and criminal justice. Attorney General Jeff Sessions said the rescissions were necessary because the guidelines “were issued improperly or that were simply inconsistent with current law.”

“In the Trump administration, we are restoring the rule of law,” Sessions said in a statement.

Democrats pounced, noting that the rescissions come roughly a week before Trump is expected to announce his pick to succeed Supreme Court Justice Anthony Kennedy, who is slated to step down on July 31. The Harvard University case is widely expected to reach the Supreme Court, and the Democrats are concerned that Kennedy’s replacement will prove more hostile to race-based programs like affirmative action.

“The President,” Richmond said, “is sending a message to his future nominee and to his base that he and his administration don’t care about diversity and will actively work to turn back the clock.”

I believe this is all beside the point. Do we wish to live in an actually free country, or just something that at a glance appears to be one? I, for one, prefer a truly free existence to this serfdom in which I now live.

The statutes, regulations, etc., that prohibit me from doing what I damn well please – discriminate on any basis I choose — are abhorrent. I as I have written here before, would never choose a culturally Asian person as an employee – or anything else for that matter. We should all be restored to our fundamental civil right to sell to whom we choose, to rent to whom we choose, to teach to whom we choose.

Anything else is enforced association which is a moral abomination which can only be justified to the extent – and really, not even to this extent – that blacks were by statute refused equal service. In other words, whites could not serve them equally due to law.

However, none of my friends- I am 60 – none of them ever worked under conditions of legally-enforced segregation. Thus penalizing us for this is immoral.

And let me say this: if you wail that no blacks, asians, jews, etc., would get service, you truly have spent no time with businessmen as I have. Make no mistake: the dollar is king and they will avoid offending or even taking a public position on many, many things in order to continue to have such persons frequent their establishments.

When legally enforced, they had no choice. Without the legal requirement, they are quite open, regardless, to serving all kinds of people.

We are tearing ourselves apart over what actually is none of our government’s business. It’s one thing to give advantage to blacks because many of their ancestors were brought here in the holds of really crappy ships in chains like cord wood, but we owe nothing to latins* that voluntarily walk here and pay coyotes because they want to make more money and skim our welfare system and school system and medical system and road systems.

*I use “latin” as in America we anglicize words. “Latino” is the Spanish form of the word and inappropriate in America.

Here come the Asians onto the Trump Train

I’m just going to leave this here. It’s Mark Twain’s essay in the original Harper’s issue, “Concerning the Jews.” I first found it when I was trying to read all things Mark Twain in college.

I though it was hilarious, but the corker was the response I read from some prominent Jew that they really did not need this kind of help because it was counterproductive. Yes, the man chose to take offense at being praised.

Affirmative action was introduced in 1961 and was originally limited to banning discrimination based upon race in federal hiring. This was later expanded by various political entities to actually provide for discrimination for select groups, mostly Blacks. It was later extended to provide discrimination for several other minority groups. It was old to the American People as being a remedy for previous discrimination against these groups which led to those groups being unable to compete effectively with the white majority. The assumption was that after a few years, these groups would be able to effectively compete and affirmative action would no longer be needed.

Now, either the entire theory was false and nothing that is done to discriminate for minorities is ever going to allow them to compete effectively against the majority in a color blind world, or it was all a lie to begin with. Either way, it is time to end this fiasco. If it is true that these minorities can not compete, even after nearly 60 years of positive discrimination, then perhaps reestablishing fair competition will stimulate the development of these minorities to be able to compete with the majority.