Media ignores Tamimi Clan’s child exploitation and support for terror, because it doesn’t fit the narrative. 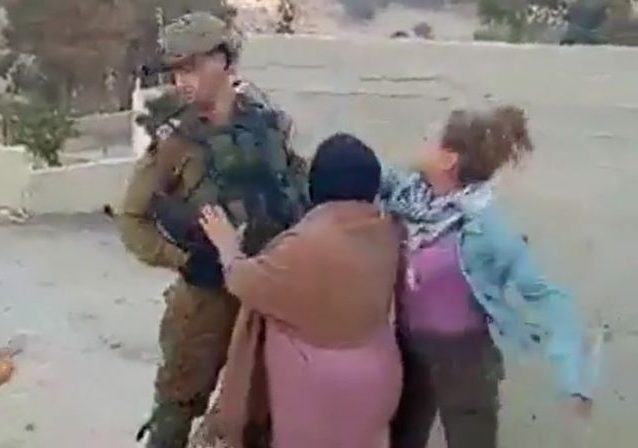 The Tamimi Clan of Nabi Saleh in the West Bank is notorious for exploiting village children for propaganda purposes.

The Tamimi Clan of Nabi Saleh and their Western supporters exploit children in order to obtain viral video and photographs.

The children are used to try to provoke Israeli Border Police and soldiers. If the provocation is successful, which it almost never is, they get a photo of an Israeli being brutal towards a child. In almost every case, though, there is no reaction from the soldiers, so the video and photos are spun as reflecting “brave” Palestinian children and the “weak” Israeli soldiers.

The Tamimis are experts at manipulating images and press coverage of these child demonstrators.

The leading proponent of this tactic is Bassem Tamimi and others in the Tamimi media operation. For extensive documentations, including social media, videos and images, see our posts, Bassem Tamimi and the Use of Children as Political Props and Palestinian Child Exploitation – 10-year old “Journalist” Janna Jihad.

The children are then raised as symbols of Palestinian resistance and glorified not only by Palestinian social media, but by Western left-wing anti-Israel supporters of the Tamimis.

There are many false narratives spread to justify the Tamimi Clan’s child exploitation, such as the claims that the weekly violent protests  at Nabi Saleh are only because the Israelis cut the village off from a natural spring. That claim about the spring is something another infamous Tamimi, Manal, has previously denied was the motivation.

Ahed’s Attack on Soldiers Staged by Her Mother

Most famous among the Tamimi child video stars is now-17-year-old Ahed Tamimi.

Since early childhood Ahed has been used by the Tamimis and their supporters. Her father, Bassem, explained that Ahed’s flowing blond hair made her attractive to a Western audience, According to Bassem:

In December 2017, Ahed was arrested for hitting an Israeli soldier. The incident was captured on viral video, as Ahed’s mother was live streaming the event on Facebook.

The attack on the soldiers was presented in Palestinian and leftist propaganda as a spontaneous reaction by Ahed because Ahed’s cousin had been hit with a rubber bullet during a riot shortly before the incident and Ahed was trying only to protect her home (something Bassem actually denied early on, before the media narrative was set.)

In fact Ahed’s assault on the soldier was directed by her mother Nariman, as video analysis showed, VIDEO confirms Ahed Tamimi attacked Israeli soldiers at her mother’s direction: 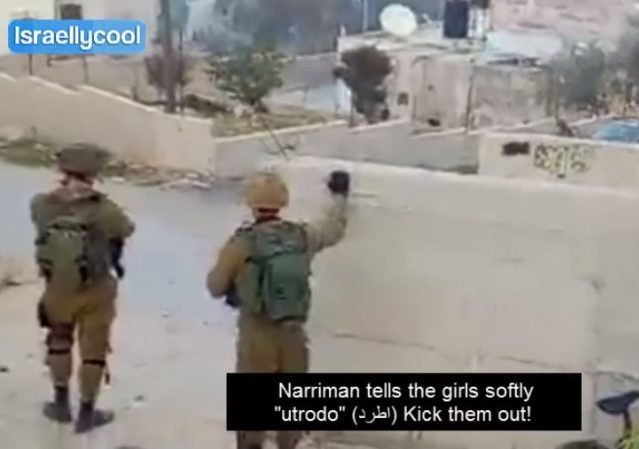 At the very end of the Facebook live stream, Ahed endorsed terror tactics used against Israel. 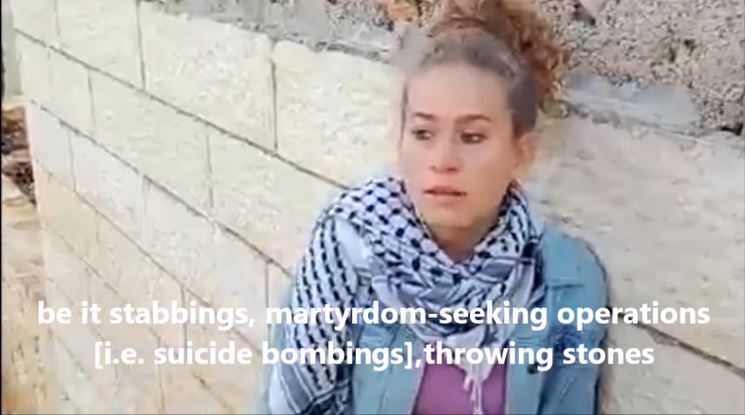 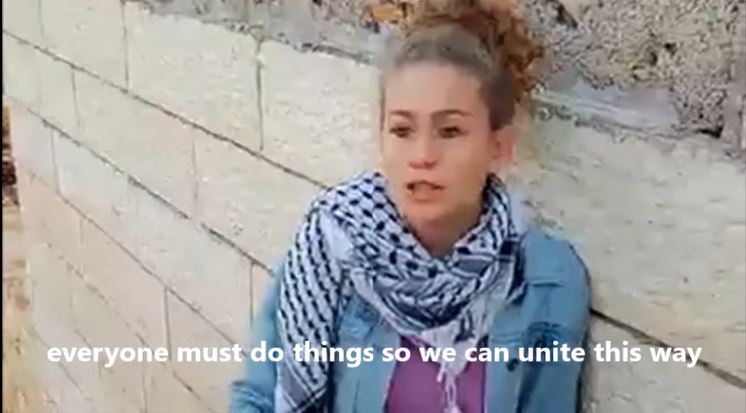 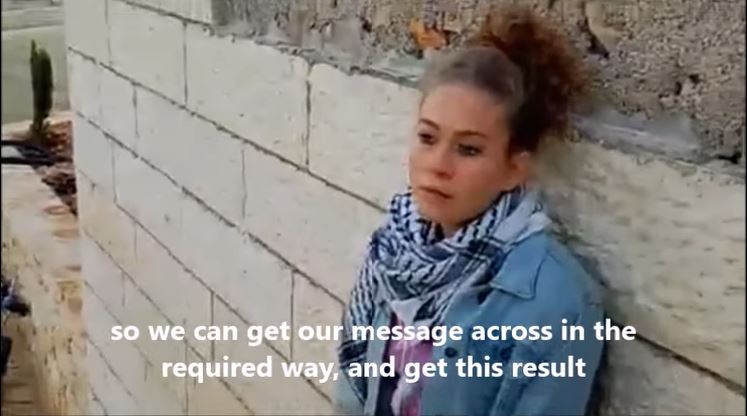 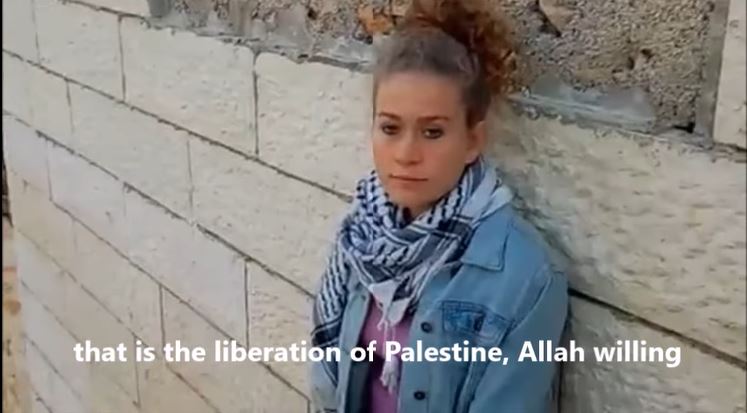 It’s a segment of the video the international media largely ignores, because it does not fit the victim narrative:

Bassem, Nariman and Ahed Tamimi are particularly strong supporters of cousin Ahlam, the mastermind of the Sbarro Pizzeria bombing.

Here they are at Ahlam’s wedding in Jordan after her release in a prisoner exchange. She married another Tamimi Clan member who also had been imprisoned for murder of a Jewish Israeli. 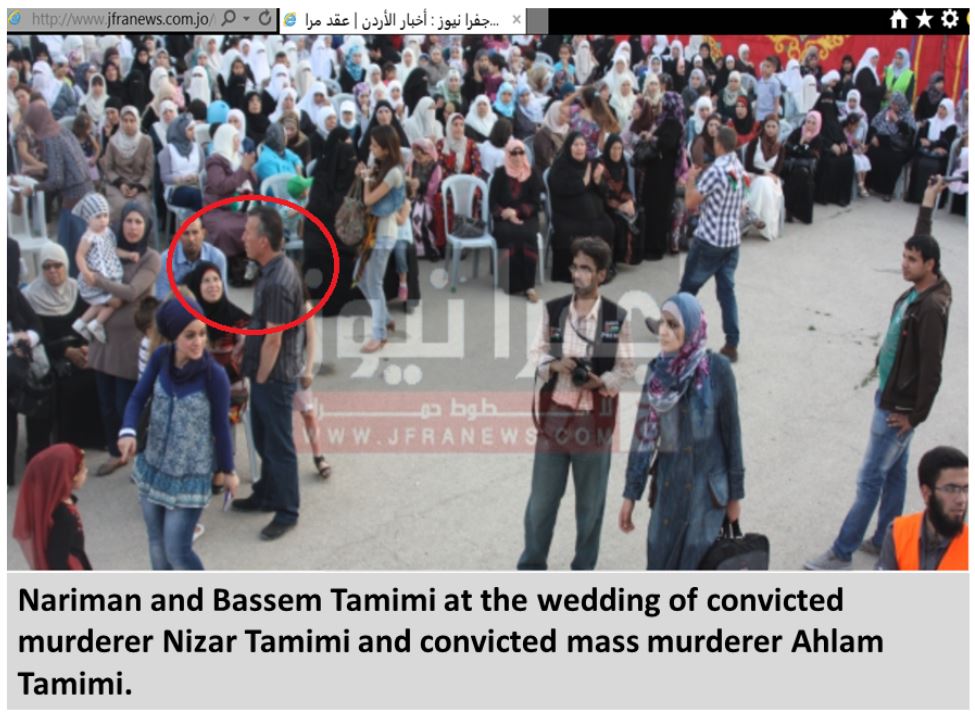 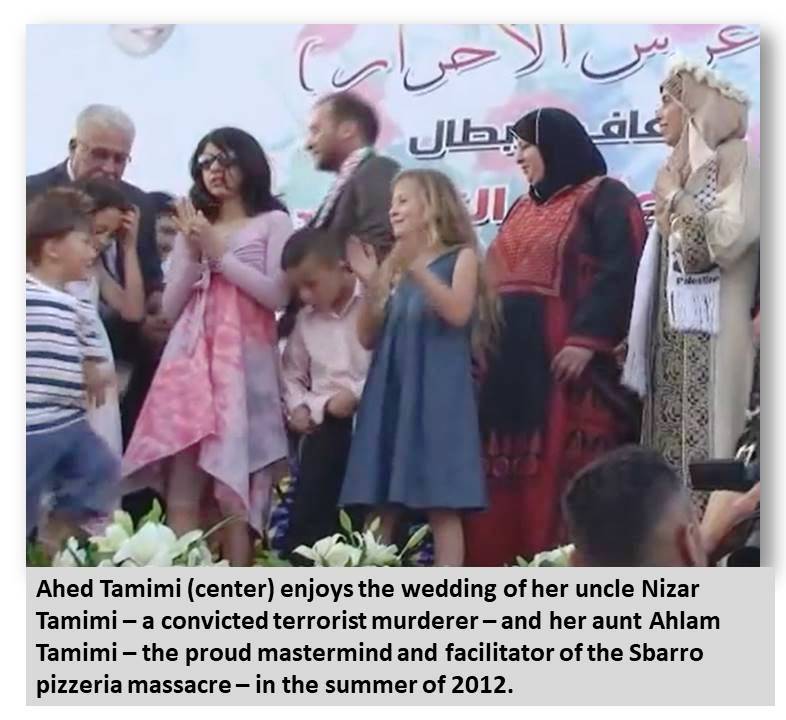 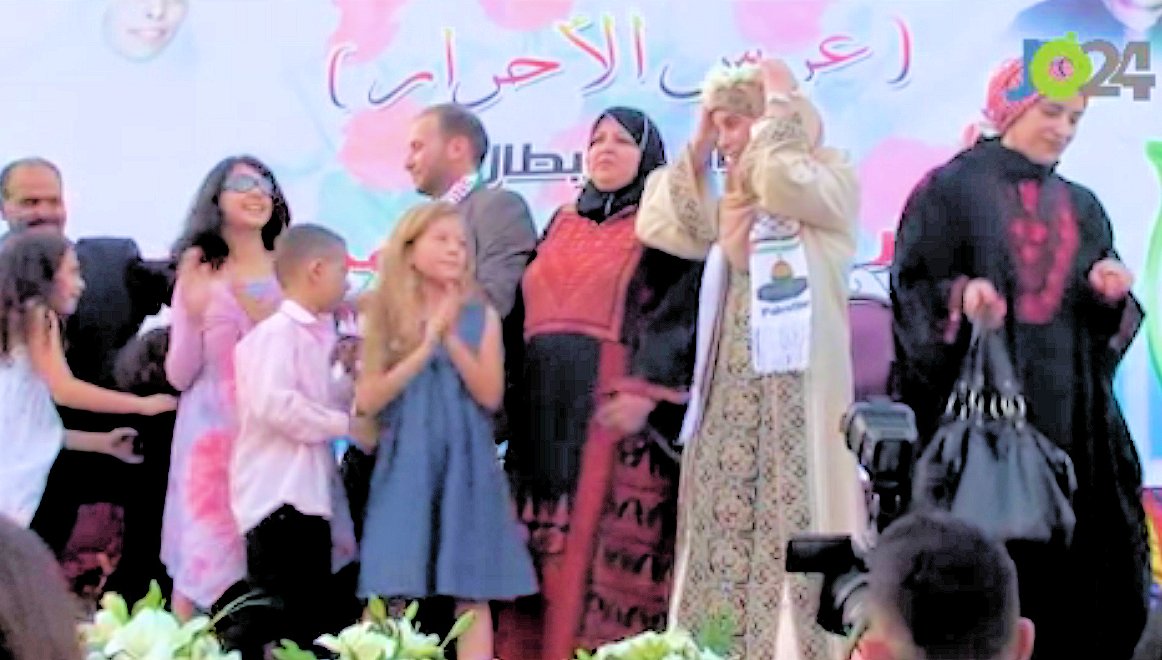 Ahed’s mother, Nariman, openly supports Ahlam and denies she is a terrorist despite her role in the Sbarro massacre, and helped spread instructions on how to stab a Jew: 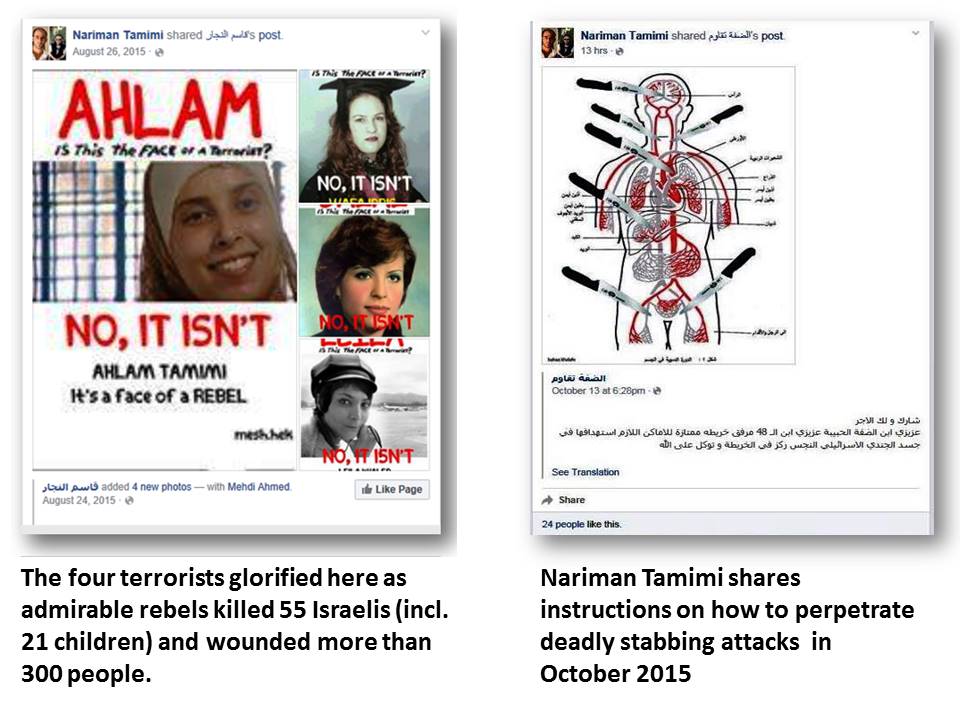 Bassem’s family is not along in supporting Ahlam. Ahlam Tamimi’s “relatives in Nabi Saleh … speak of her with great affection.”. 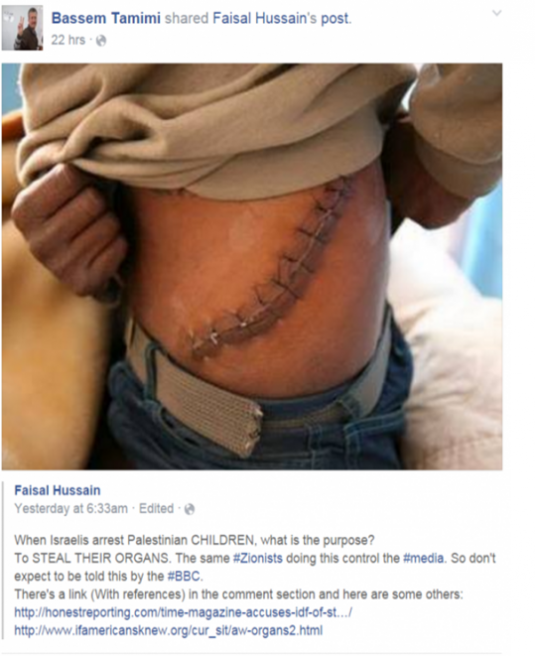 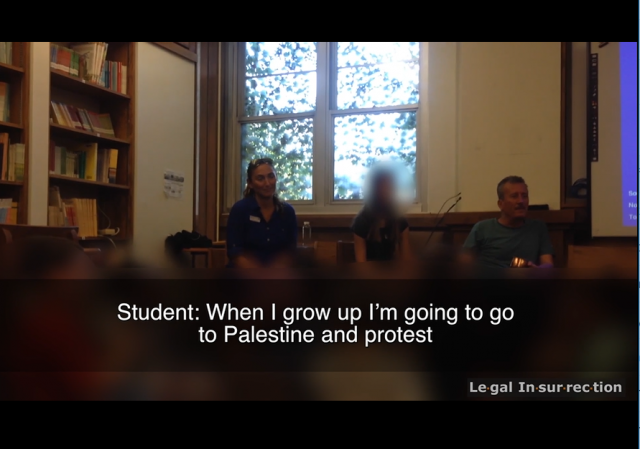 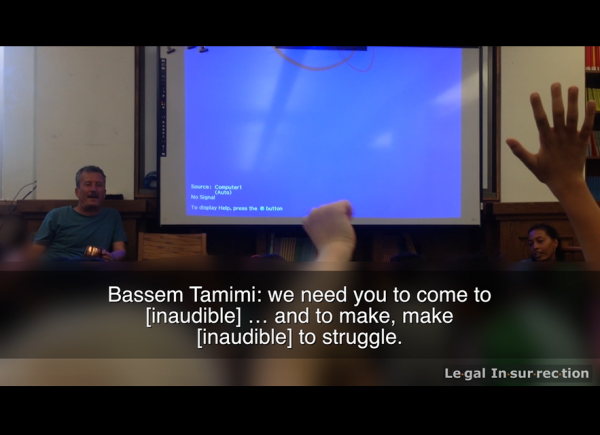 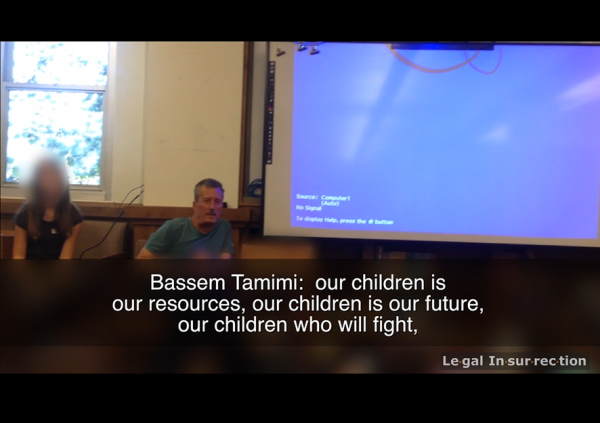 Among other things, Bassem called on the American children to become “freedom fighters for Palestine: 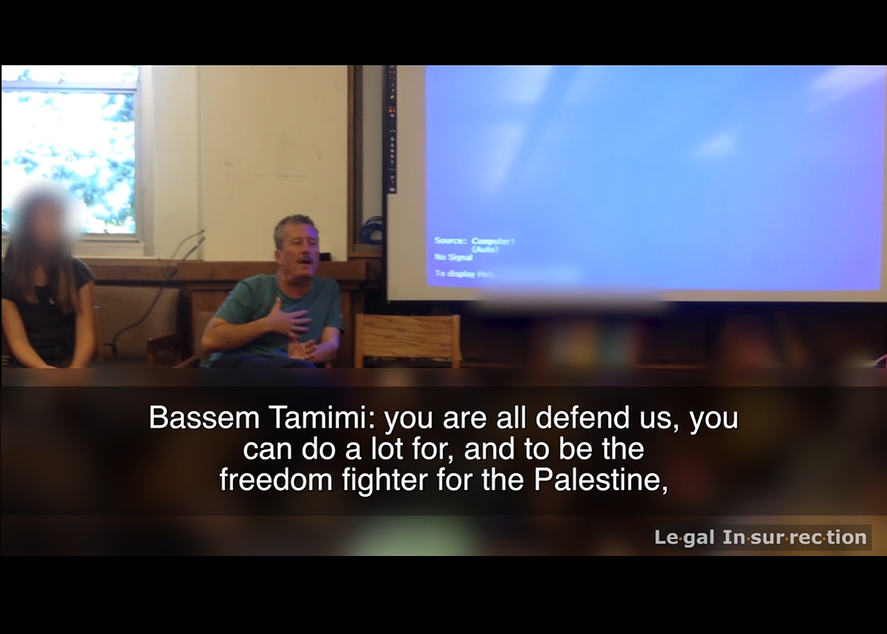 Ahed, her cousin and her mother were all arrested and indicted. They pleaded guilty in a plea bargain, with Ahed and her mother to serve 8 months in prison.

Anti-Israel extremists like Ariel Gold of Code Pink, and Jewish Voice for Peace, took up Ahed’s cause, holding protests in which they called for an Intifada and the destruction of Israel:

After serving their sentences, Ahed and her mother were released from prison today.

#AhedTamimi is back in her comfort zone- at the center of attention. pic.twitter.com/V7C03laFVm

Ahed Tamimi got to have some ice cream after eight months behind bars, after having to spend her 18th birthday in shackles. #NabiSaleh #Palestine “it’s not just my story, it’s all Palestinian children. Fight for them as you have fought for me” she tells me. pic.twitter.com/8Id75iv0Ua

Everything is staged for the cameras, as this AJ+ video shows. AJ+ is the anti-Israel viral video propaganda arm of Al-Jazeera. Notice how many cameras surround Ahed:

Ahed refused to answer questions from Israeli media, because they would ask the hard questions the international media refuses to ask:

Ahed says she’s boycotting Israeli press bc how it Has attacked and defamed her family and l will not answer their questions so don’t bother asking pic.twitter.com/HN8IovTIW1

This is a script the Tamimis have perfected, and will continue, because it is successful.

“Media ignores Tamimi Clan’s child exploitation and support for terror, because it doesn’t fit the narrative.”

One of the very few times I might disagree with you, but just as a matter of degree.

You or I or any Joe Public rando could “ignore” such.

I could be wrong, but my very strong hunch is that most members of the media are well aware of the performance art nature of the Tamimi Clan’s exploits and exploitations and, when sincerely fulfilling your job duties as a member of the news media to inform the public of news demands you provide a truthful account and context to the best of your abilities, doing far less (in this case, far, far less), essentially amounts to a cover up.

For myriad reasons, this conflict is under continuous, unmatched scrutiny. To say members of the media ignore the Tamimi’s continual deceptions is, in effect, to grant them a degree of assumption of gullibility.

They aren’t gullible. They can act gullible when a situation demands it for the purpose of retaining an overall impression of acting in good faith for gullible news consumers. They know what they’re doing. So, I’d say what they’re doing is much more sinister then simply ignoring inconvenient truths. They’re covering them up for all practical purposes.

Maybe I just woke up on the pedantic side of the bed. Sorry.