Rep. Jim Jordan Refutes Accusations He Did Nothing About Alleged Sexual Abuse at Ohio State

Rep. Jim Jordan Refutes Accusations He Did Nothing About Alleged Sexual Abuse at Ohio State

“Everyone knew, including Jim.” 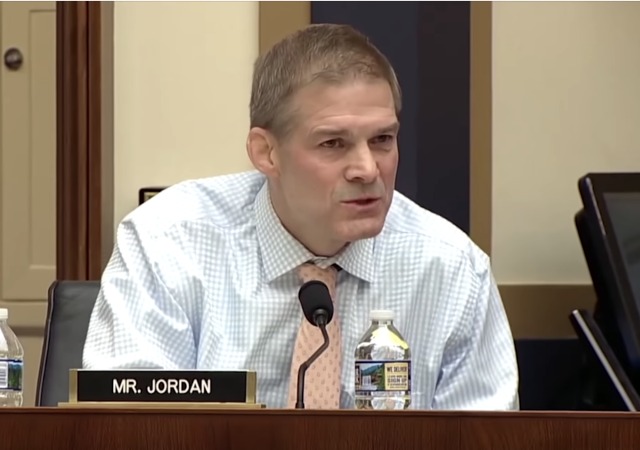 It’s kind of weird this story is coming out now when Ohio Republican Rep. Jim Jordan’s name has become prominent in talks of who should be the next Speaker of the House.

The university announced in April it opened an investigation into the allegations against Strauss, who died in 2005.

Jordan, a former college wrestling champion, has said he did not know about Strauss’s alleged behavior until the doctor’s accusers came forward publicly this spring.

But Mike DiSabato, a former Ohio State wrestler, said Strauss’s groping of student athletes was widely known at the university. He claimed Jordan was aware. NBC News first reported the allegations from DiSabato and two other former wrestlers.

Two other wrestlers spoke to NBC News and claimed that Jordan knew:

“I remember I had a thumb injury and went into Strauss’ office and he started pulling down my wrestling shorts,” he said. “I’m like, what the f— are you doing? And I went out and told Russ and Jim what happened. I was not having it. They went in and talked to Strauss.”

Yetts said he and his teammates talked to Jordan numerous times about Strauss.

“For God’s sake, Strauss’s locker was right next to Jordan’s and Jordan even said he’d kill him if he tried anything with him,” Yetts said.

A former teammate of DiSabato’s who asked not to be identified said he never told Jordan directly that Strauss had abused him. But there is no way Jordan could have avoided the rumors “because it was all over the locker room.”

“I love Jimmy to death,” the ex-wrestler said. “It was a head-scratcher to me why he would say he didn’t know anything. Doc used to take showers with the team even though he didn’t do any workouts, and everybody used to snicker about how you go into his office for a sore shoulder and he tells you to take your pants down.”

Jordan stressed he knew nothing to Politico on Tuesday night:

But the co-founder of the House Freedom Caucus said his accusers are lying. Jordan said he would not have hesitated to come forward to report sexual abuse.

“It’s not true,” Jordan said. “I never knew about any type of abuse. If I did, I would have done something about it. And look, if there are people who are abused, then that’s terrible and we want justice to happen.”

Jordan told The Columbus Dispatch that he never “heard about any type of abuse at all” and no one ever reported abuse to him. Jordan’s office released another statement. From CNN:

Jordan’s office denied that he knew of any such behavior in two separate statements Tuesday.

“Congressman Jordan never saw any abuse, never heard about any abuse, and never had any abuse reported to him during his time as a coach at Ohio State,” the first statement said.

An hour later, his office released an updated statement that said: “Congressman Jordan never saw any abuse, never heard about any abuse, and never had any abuse reported to him during his time as a coach at Ohio State. He has not been contacted by investigators about the matter but will assist them in any way they ask, because if what is alleged is true, the victims deserve a full investigation and justice.”

Outgoing Speaker of the House Paul Ryan (R-WI) endorsed House Majority Leader Kevin McCarthy (R-CA) to succeed him in the role, but conservative groups have rallied around Jordan.

National Review reported that at least 10 groups have given their support to Jordan. These groups include: Tea Party Patriots, the American Family Association, Gun Owners of America, and the legendary Richard Viguerie’s FedUp PAC. FreedomWorks also unveiled a Draft Jim Jordan campaign.

Jordon told Breitbart News on June 25 that he planned to be a “part of” the discussion when it comes to the Speaker’s race, but did not come right out and confirmed any plans to run:

“Right now, the most important thing is we do what we said,” Jordan added. “We get the right kind of immigration bill across the finish line, we actually make the tax cuts permanent, we fight for the values we told the American people [we would], we reform welfare. I mean, these are the kind of things we told the American people we were going to do and I think more important than who the Speaker is next year is what we do this year because if we don’t do the right things this year we might not have a race for Speaker. Maybe it would be a race for minority leader so let’s stay focused on what we got to do and everything else will take that step.”

Not everyone has expressed happiness at the prospect of Jordan as speaker. Some have doubts when it comes to his fundraising ability compared to McCarthy. CNBC reported that “the McCarthy Victory Fund has pumped in $3.4 million to the National Republican Congressional Committee, according to the Center for Responsive Politics. The NRCC has raised more than $10 million this cycle, records show.”

Jordan has only raised $327,442 for his re-election campaign and the House Freedom Fund, a PAC he founded,”has raised $2.3 million,” which goes to “candidates who support the Freedom Caucus’ cause, which includes strict immigration control and cuts in spending.”

Others also fear that Jordan running for speaker could deepen the divide within the GOP:

Even though McCarthy is seen as the favorite, a Jordan run for speaker could also create divisions within the congressional GOP and actually hurt McCarthy’s chances, according to aides who have been involved with past leadership elections.

Jordan could siphon conservative votes from McCarthy, for instance. That, in turn, could leave the House GOP undecided on who should be the next speaker, raising the possibility that the California Republican could drop out under pressure from the Freedom Caucus.

That could turn into an opening for the House majority whip, Steve Scalise of Louisiana. He has said he would not run against McCarthy for speaker but has not publicly ruled out running against another opponent.

Swamp is just out to tarnish Jordan.