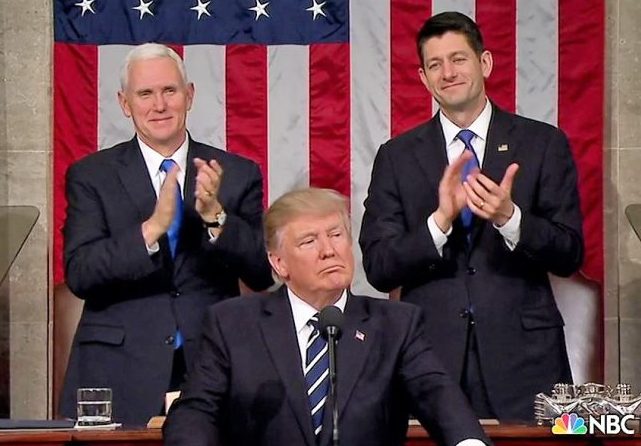 As midterms approach, the generic ballot has been in flux. The Democrats began with a double-digit lead, this was whittled down significantly, and is now back up at around 8%.  Other factors make predicting whether or not Republicans can maintain control of the House difficult, but Republicans have an advantage in that even if there is a wave election, they may still retain the House.

Democrats are worried.  Their uninspired new “for the people” slogan reflects their intention to shift focus from socio-cultural busybodying to economic matters.  However, they are also struggling with the “free stuff” wing of the party and its #AbolishIce demands.

House Republicans are being out-fundraised by Democrat challengers, but they can also benefit from Democrat backlash against radical socialists like Alexandria Ocasio-Cortez.  Additionally, a new poll shows that millennials are not very enthusiastic about voting in November’s midterms, and this will help Republicans. 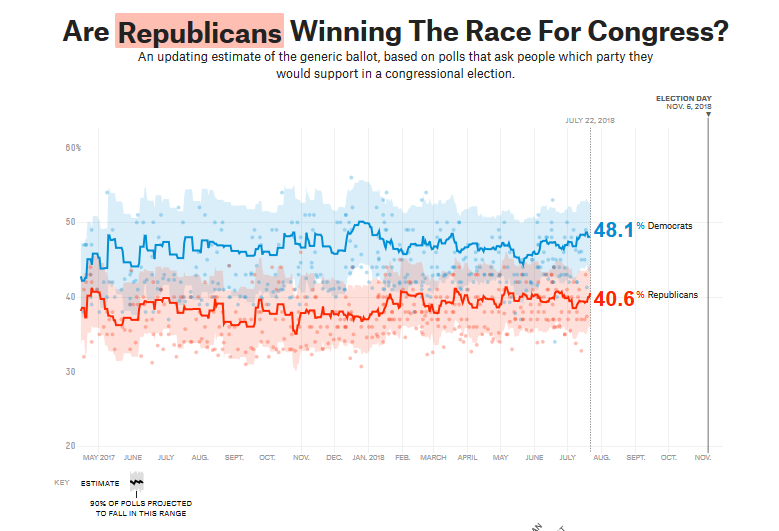 Democrats are likely to be most hurt by the #AbolishICE movement; Americans do not want ICE abolished.

One of political life’s basic rules is that when your opponent is shooting himself in the foot, don’t interrupt him. In disregard of that rule, the campaign by liberal Democrats to abolish the U.S. Immigration and Customs Enforcement agency gave President Trump a much needed distraction from the controversy over his inhumane family separation policy. In fact, “Abolish ICE” backfired so badly that it put Democrats on the defensive on immigration policy, which could hurt their prospects in the midterm elections.

. . . . A cornerstone of Ocasio-Cortez’ campaign was the abolition of ICE. Her triumph inspired what had until then been a small protest and minor hashtag movement. “Abolish ICE” became the new liberal rallying cry, bordering on a litmus test for Democrats with presidential ambitions. Sens. Elizabeth Warren (D-Mass.) and Kirsten Gillibrand (D-N.Y.) took up the cry of “Abolish ICE” to demonstrate their progressive bona fides and several left-leaning Democratic congressmen introduced a bill to abolish the agency, evidently misunderstanding the role of the agency they wanted to abolish.

#AbolishIce, however, is essentially a rallying cry for open borders, and this is a hard sell to Americans.

Not only are millenials indicating that they are unlikely to vote in November, but seniors are eager to get to the polls.

A new survey from the Public Religion Research Institute and The Atlantic found that only 28 percent of young adults ages 18-29 said they are “absolutely certain” of voting in the 2018 elections, Vox reported.

The same poll found that 74 percent of seniors — who are more likely to vote Republican than millennials — said they are “absolutely certain” about voting in the midterms. Vox described the data as showing a “massive” generational gap in voting intent.

The predicted Democrat blue wave could occur, and Republicans could still retain control of the House.

Democrats are optimistic about riding a so-called blue wave to control of the House this November, and it’s easy to see why. The president’s approval rating is in the low 40s, the Democrats have a comfortable lead in generic congressional polls, and it’s a midterm election year. Historically, it’s a setup for a wave election.

There’s no precise definition of that term, but it typically describes an election in which one party makes big gains in the national popular vote, and in seats as well. Incumbents considered safe can lose. Waves flipped control of Congress in 1994, 2006 and 2010.

Yet here’s a surprising fact: Even a wave as powerful as those in 2006 or 2010 might not give Democrats control of the House.

Incumbency plays a significant role in the upcoming midterm elections, the NYT explains.

In a wave election, Republicans representing Democratic-tilting districts like these would be projected to lose their re-election bids. They are the figures farther down the slope in the accompanying illustration. (The one all by itself at the bottom, representing Pennsylvania’s Fifth, was sunk by redistricting.)

Mostly, though, the districts are above sea level. Incumbents who represent even somewhat Republican-leaning districts are generally favored to win re-election, even in a wave election. Waves aren’t necessarily as deadly as you might think.

This makes it hard to imagine huge Democratic gains, like those the Republicans made in 2010. In past elections, incumbency has been worth around seven points, although that advantage has been declining.

Republicans have so many safe seats that the Democrats would be expected to gain only 22 seats if they flipped Republican-held districts at a rate equivalent to the waves of 2006 or 2010 (without factoring in the large number of open seats). It would leave them one seat short of a majority.

Democrats need an historic wave in order to regain the House.

. . . .  It’s hard, even impossible, to predict the distribution of Democratic gains at this early stage. But there are some tentative hints that the 2018 election might be a little bit more like 2006 than 2010. Democrats have done very well in special elections in conservative areas, like Pennsylvania’s 18th District. And Democrats are targeting a lot of districts in deeply conservative areas. Republicans had no need to do so in 2010, given how many Democrats represented Republican-leaning areas.

. . . .  In recent weeks, there has been some debate about whether the Democrats are still riding a wave heading into the midterms. Some analysts have been surprised by polls that show close races in incumbent-held districts that lean Republican in presidential elections. That should be no surprise. And it shouldn’t be a surprise if, this time, a wave election yields an extremely close fight for control of the House.

In November 2016 the pollsters said that Felonia von Pantsuit and her trained walrus Timmy were Pennsylvania Avenue bound; how did that one turn out?
I think that so long as the Dems keep embracing the bimbo from Queens (Adirondack Barbie Gillibrand today called for abolishing ICE “once we take power again”), she’ll not only motivate our side, she’ll make it hard for many Dems to hold their noses to vote for her and her allies.
What does Nate Silver book the odds at these days? His 98% for Killery is a personal best that I hope he repeats in November.