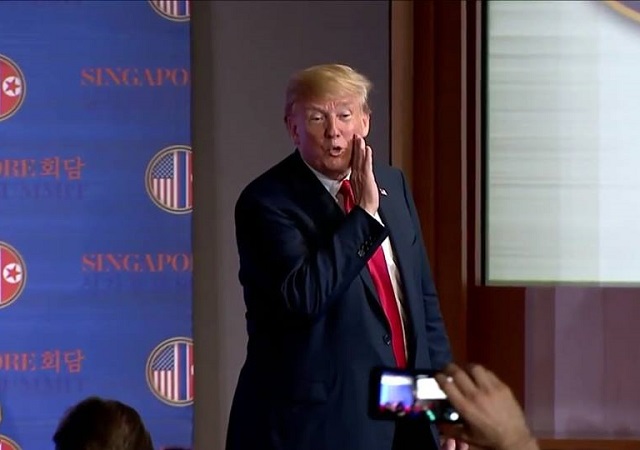 The sharpest reaction came from Germany, where the country’s Foreign Minister Heiko Maas took the opportunity to undermine the US President.

Chancellor Angela Merkel was unavailable for comments as she faced arguably the toughest crisis since she resumed office two months ago. Chancellor Merkel’s Bavarian Catholic sister party, the Christian Social Union, wants her to revise her controversial open doors policy for illegal immigrants. State of Bavaria wants authority to refuse entry to unauthorized asylum-seekers at its borders. Chancellor Merkel is opposed to such measure.

The German mainstream media echoed the sentiments expressed by Foreign Minister Maas. German weekly Der Spiegel, widely read in government circles, ran an editorial titled: ‘It’s Time to Isolate Donald Trump.’ The weekly issued a call-to-arms, urging, “Europe can offer resistance by isolating Trump, by avoiding him and by making it explicitly clear why they are doing so.”

German weekly Die Zeit took a pessimist view of the Singapore summit, writing: “The summit between Donald Trump and Kim Jong Un offered little substance.” Die Zeit, was more concerned by President Trump’s withdrawal from the Iran deal, which the weekly described as the “destruction of the Liberal World Order” while “Europe [was] the loser in the [US] withdrawal from the Iran deal.”

The agreement between the U.S. and North Korea “leaves Japan in cold on North Korea,” Germany’s DW News remarked. “The outcome of the US-North Korea summit in Singapore is a headache for Japan. None of Tokyo’s priorities were addressed by Donald Trump and Kim Jong Un. Japan must now reorient itself.” The U.S. President’s was ‘undermining the security order in Asia,’ the broadcaster concluded.

According to French TV channel France 24, “most analysts” thought that “Trump-Kim meeting in Singapore didn’t amount to much.” There was “despair in Korea policy circles” over the signed agreement which “turned into depression hours later, when Trump held an extraordinary press conference,” the broadcaster continued.

To underline this claim, the broadcaster quoted Robert Kelly, a professor at South Korea’s Pusan University. “God, this is just depressing. All that hype for this? All that drama and the Nobel talk? Come, art of the deal. This is it? This is, well, pathetic given that the US president was personally involved,” Kelly said.

France-based broadcaster EuroNews also cited ‘many analysts’, who unanimously agreed that ‘Pyongyang had been let off the hook and that Trump had given away substantial leverage.’

“What Donald Trump accomplished in Singapore had not been achieved by any other President before him—not even by the Nobel Prize winner [Obama],” said Alexander Gauland, the co-leader of Germany right-wing AfD party.

UK politician Nigel Farage launched a campaign to have President Trump nominated for the Nobel Peace Prize. Farage, who represents Britain in the EU parliament, wants to start a petition and seek support of other European politicians. “A lot of people find it difficult not to try and discredit everything Trump does, but I remember the hysteria over awarding the prize to Obama for things he might do,” he said.

European elite that handed President Obama a Nobel Peace Prize just for showing up to work, can’t find it in themselves to acknowledge that US President Trump has succeeded in defusing one of the world’s most dangerous flashpoints. They would rather see the current US President fail than for peace to return to the Korean Peninsula.

Yes. But many of the the EU leadership were part of the fifth column.

When you have the democrat Marxist party at your throat –
you’re doing something right.

When you have the GOPe, the DOJ, the FBI at your throat –
you’re doing something right.

When you have the nevertrumpers and ragspierre, at your throat –
you’re doing something right.

And When you have the europussies at your throat –
you’re really, really doing something right.