Relativism, or a universal moral code? 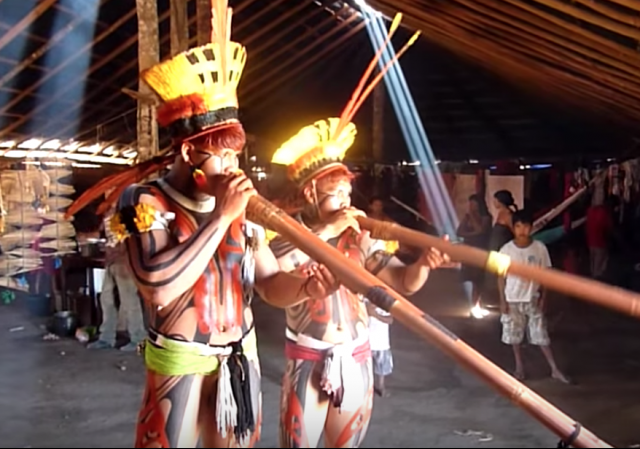 “”Should Brazil keep its Amazon tribes from taking the lives of their children?” is the subtitle of a recent article in Foreign Policy. It describes traditional but still-existent customs of many Amazon tribes in Brazil that dictate killing handicapped children and even those one might define as transgendered, and a controversy in Brazil over whether a law should be passed that bans such practices (it already has passed one legislative body in that country and is being considered by the other):

The Kamayurá are among a handful of indigenous peoples in Brazil known to engage in infanticide and the selective killing of older children. Those targeted include the disabled, the children of single mothers, and twins — whom some tribes, including the Kamayurá, see as bad omens. Kanhu’s father, Makau, told me of a 12-year-old boy from his father’s generation whom the tribe buried alive because he “wanted to be a woman.”

One would think the answer to the question in the article’s subtitle would be “of course”—unless it’s being answered by cultural and/or moral relativists:

The Brazilian Association of Anthropology, in an open letter published on its website, has called the bill an attempt to put indigenous peoples “in the permanent condition of defendants before a tribunal tasked with determining their degree of savagery.”

Indigenous people around the world have been increasingly assimilated during the last century or more, but the Amazon remains one of the last holdouts to the process, for rather obvious reasons connected with the environment. Even if the law were to be passed, it might be somewhat moot if Brazil doesn’t exercise all that much influence over its indigenous Amazon tribes at this point. And in fact Brazil doesn’t exercise much influence over all its tribes:

In 1973, Brazil passed the Indian Statute, which groups indigenous individuals into three categories: those who live in complete isolation, those in limited contact with the outside world, and those who are fully integrated into mainstream society. The statute states that tribes such as Kanhu’s are only subject to federal laws depending on their degree of assimilation into Brazilian life. It is thanks to this language that indigenous people do not face prosecution for child killing…

If the bill passes the Senate, it will be tacked on as an amendment to the Indian Statute and require the government agencies that oversee indigenous communities to take a series of proactive measures. One will be the creation of an up-to-date registry of certain pregnant women so that the government can keep an eye on those (such as single mothers or women carrying twins) whose newborns might be targeted for death by their tribes. Another measure will require that the public prosecutor’s office be notified immediately of reports of human rights violations committed against newborns or any other stigmatized members of indigenous communities, including the elderly. The amendment also stipulates that any citizen who learns that an indigenous person’s life or safety is at risk but does not report it to the authorities will “be penalized under the applicable laws.”

So as I see it, the real subject matter of the law is how assertive the prevailing culture in Brazil is going to be in extending its legal reach to the indigenous peoples who have not really been part of it up till now.

It goes almost without saying—although I suppose it’s necessary to say it—that indigenous peoples develop customs that for the most part are motivated by and adapted to the conditions they face. But these people are now living in Brazil. The broad question that this issue raises is not limited to Brazil and is not limited to child-killing, but has to do with whether a country or a culture that is dominant has the courage of its own convictions and moral codes, and believes there are also universal moral codes that need to be enforced under all circumstances if possible.

You may have already heard this relevant story from the days of British colonialism in India:

…[W]hen told of an actual Sati [widow-burning] about to take place, [General Sir Charles James Napier] informed those involved that he would stop the sacrifice. The priests complained to him that this was a customary religious rite, and that customs of a nation should be respected. As recounted by his brother William, he replied:

“Be it so. This burning of widows is your custom; prepare the funeral pile. But my nation has also a custom. When men burn women alive we hang them, and confiscate all their property. My carpenters shall therefore erect gibbets on which to hang all concerned when the widow is consumed. Let us all act according to national customs.”

…[T]he Indigenous and Tribal Peoples Convention, ratified by Brazil in 2002…stipulates that indigenous peoples “shall have the right to retain their own customs and institutions, where these are not incompatible with fundamental rights defined by the national legal system and with internationally recognised human rights.”

According to [human rights lawyer] Barreto, under international law the way forward is obvious. “Certain cultural practices here are incompatible with human rights,” she says. “They need to be thwarted. There’s no middle ground.”

There is no contradiction between recognizing that the custom originally had utility and saying that the time has come to end it, and that the latter is the right thing to do. The real question is whether Brazil has the courage of its own convictions and a commitment to universal human rights, and the will and resources to actually back the law up in practice, if passed.

These killings are the price of inbreeding for generations, flaws must be ruthlessly weeded out.