Would be a shame if Netflix turned left in an obvious ideological direction. 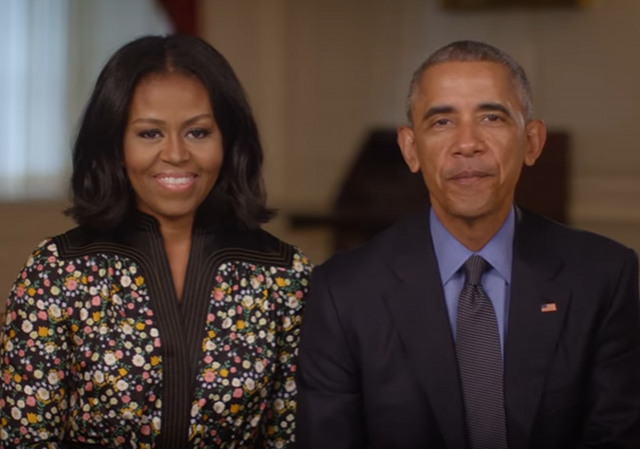 The former first couple always fancied themselves part of the Hollywood scene, so the move to production seems a natural fit.

The Obamas will produce a diverse mix of content, including the potential for scripted series, unscripted series, docu-series, documentaries and features. These projects will be available to the 125 million member Netflix households in 190 countries.

The Obamas have established Higher Ground Productions as the entity under which they will produce content for Netflix.

“One of the simple joys of our time in public service was getting to meet so many fascinating people from all walks of life, and to help them share their experiences with a wider audience,” said President Obama. “That’s why Michelle and I are so excited to partner with Netflix – we hope to cultivate and curate the talented, inspiring, creative voices who are able to promote greater empathy and understanding between peoples, and help them share their stories with the entire world.”

“Barack and I have always believed in the power of storytelling to inspire us, to make us think differently about the world around us, and to help us open our minds and hearts to others,” said Mrs. Obama. “Netflix’s unparalleled service is a natural fit for the kinds of stories we want to share, and we look forward to starting this exciting new partnership.”

“Barack and Michelle Obama are among the world’s most respected and highly-recognized public figures and are uniquely positioned to discover and highlight stories of people who make a difference in their communities and strive to change the world for the better,” said Netflix Chief Content Officer Ted Sarandos. “We are incredibly proud they have chosen to make Netflix the home for their formidable storytelling abilities.”

The former president and his wife won’t be alone at Netflix. Just a few months ago, Obama administration alum Susan Rice was joined Netflix’s board of directors.

So far, Netflix has done an ok job of staying somewhat message neutral. Their preachy original shows (i.e. GLOW and Cable Girls) and the awful drama 13 Reasons Why, a coming of age (sort of?) story seeping with victimhood and blame are mostly offset by several original movies by Adam Sandler, a not-so-secret Hollywood conservative. Mostly.

However, the Obamas were hyper-partisans in governance, both being true believers in the progressive cause. I’m not sure how they’ll manage objectivity in film-making but hope there’s some force to rein them back towards the center.

There’s already a deficit of apolitical entertainment in this country. Would be a shame if Netflix turned left in an obvious ideological direction.

Netflix is dead to me. Oshitbag and the first tranny will never grace a screen in my home.

Got the loot to throw at the Obamas for some virtue signaling, but no money for a season 3 of Marco Polo? F**k off, Netflix.

Ever notice you can’t search for Westerns, but there are 6 different ways to search by sexual orientation that’s not straight…. being a practicing homosapien is tough these days.

I just cancelled my subscription. On the page where they asked why?, I just entered one word: Obama