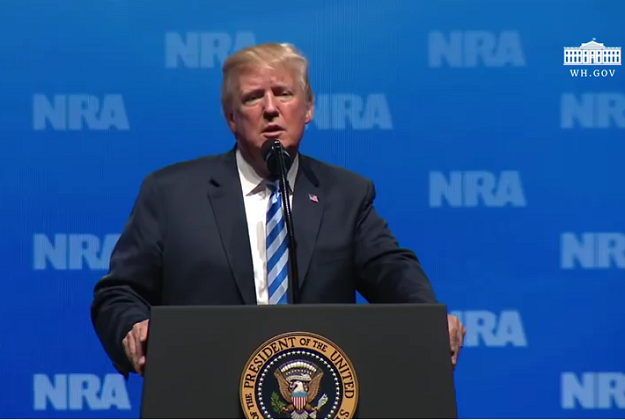 President Trump gave a great speech at the NRA on Friday, and given the venue, his speech was primarily focused on our Second Amendment right to keep and bear arms.  Some of what he had to say, however, has ruffled some feathers in the UK and France.

The speech is very campaign-esque and as such is fun to watch.  He covers everything from jobs, North Korea, Kanye, and Mueller to the focus of his speech: gun rights in America.

President Donald Trump doubled down on his support for the National Rifle Association at the group’s annual conference in Dallas on Friday after previously vowing to fight the powerful gun-rights group following a February mass shooting at a Florida high school.

“Your Second Amendment rights are under siege, but they will never, ever be under siege as long as I’m your president,” Trump told the supportive crowd in a campaign-style speech.

. . . . In his address to the group Friday, Trump renewed his pledge to possibly “harden” public schools, arm “highly trained” teachers and guards, and improve mental health and background checks to curb mass shootings.

. . . . He urged the crowd to vote in the November midterms to allow Republicans to maintain, or possibly increase, their majority in the House and Senate.

“We need Republicans to do it right to get the kind of things we want,” he said. “We have to get Republicans elected.”

Additionally, Trump spoke about our Second Amendment rights and noted that “In America we trust the people to be wise and to be good. We trust them to take responsibility for themselves, their families, and their communities. And that is why in America we have always trusted the people to bear arms.”

Trump commented on freedom and his enduring trust in American citizens in the portion of the speech in which he addressed arming teachers to protect students.

He literally advocated for armed teachers, saying, “We support the Second Amendment, not only because we believe in freedom, but also because we trust in everyday, talented, wonderful people … And by the way, these teachers, they love their students. And they are not going to let anybody hurt their students. But you have to give them a chance.”

All of us here today are united by the same timeless values. We believe that our liberty is a gift from our creator, and that no Government can ever take it away. We believe in the rule of law – and we support the men and women of law enforcement. We have pride in our history… pic.twitter.com/eONj1Y8oju

The crowd at the NRA loved the president’s speech.  France and the UK, not so much.  The president noted that the UK and France have restrictive gun laws that don’t allow the people to protect themselves and that cause terrorists to use knives or vans to commit their slaughter.

There is so much outrage on the left in France and in the UK on behalf of France, that the Express UK had this hyperbolic headline:  “End of special relationship: Macron and Trump row erupts over Paris attack comments.”  They do concede, however, at the very end that “London has seen a spate of knife crime this year, and saw more murders during February and March than New York.”

U.S. President Donald Trump caused anger in France and Britain by suggesting looser gun laws could have helped prevent deadly attacks in Paris in 2015 and linking knife crime in London to a handgun ban.

In a speech to the National Rifle Association (NRA) on Friday, Trump mimicked the shooting of victims in the Paris rampage and said if civilians had been armed “it would have been a whole different story.”

The French government issued its strongest criticism of Trump since he took office and one minister urged the leader to apologise, at a time when President Emmanuel Macron has been reinforcing bilateral ties following a state visit.

“France expresses its firm disapproval of President Trump’s comments about the Paris attacks on Nov. 13, 2015 and demands that the memory of the victims be respected,” the foreign office said in a statement.

“France is proud to be a country where acquiring and carrying firearms is strictly regulated.”

French Finance Minister Bruno Le Maire said he hoped Trump “would come back on his words and express regret”.

France expresses its firm disapproval of @realDonaldTrump's remarks on the subject of the November 13, 2015 attacks in Paris, and asks that the memory of the victims be respected. https://t.co/bY6o1duBHg

It’s not just in France that Trump’s observations met with stern disapproval. Britain was also not amused.

Trump, who is due to visit Britain on July 13, told NRA members that a “once very prestigious” London hospital, which he did not name, had become overwhelmed with knife attack victims.

London suffered a spike in knife crime early this year, and saw more murders during February and March than New York.

Last month, trauma surgeon Martin Griffiths told the BBC some of his colleagues had likened the Royal London Hospital in east London where he works to the former British military base Camp Bastion in Afghanistan.

But on Saturday he indicated Trump had drawn the wrong conclusion from his remarks.

Happy to invite Mr Trump to my (prestigious) hospital to meet with our mayor and police commissioner to discuss our successes in violence reduction in London @SadiqKhan @metpoliceuk @NHSBartsHealth #WindrushAwards pic.twitter.com/G4vYqTkfbL

The President had this to say after his speech:

I want to thank all of our friends and patriots at the @NRA. We will never fail, and we will always protect your Second Amendment! God Bless you, and God Bless America! pic.twitter.com/3PoNPV24p4

Add to that that the Muslims were able to obtain AKs despite the ban.