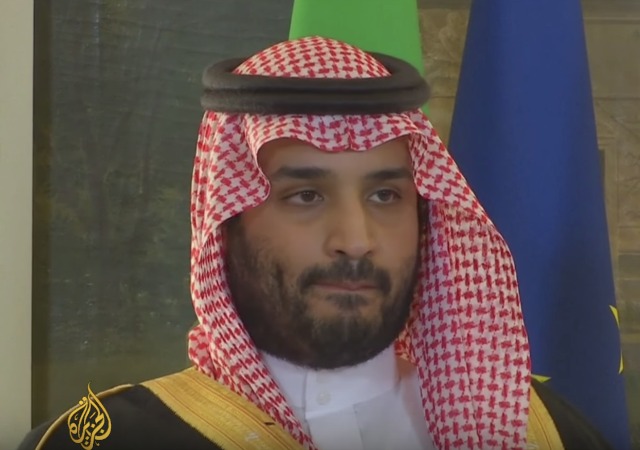 Late last week, reports began to surface that Saudi Arabia has made a deal with the Vatican to construct churches for Christian worshippers.

Sadly, that appears to have been #FakeNews.

The Vatican has denied making a deal with Saudi Arabia to build churches for Christian worshippers in the Arab country.

Reports in Middle Eastern media claimed a historic agreement had been made between Cardinal Jean-Louis Tauran and Mohammed bin Abdel Karim Al-Issa of the Muslim World League.

But a spokesperson for the Vatican said the report was ‘false’.

However, it does appear real news from the desert kingdom shows signs that it is moving to modernize. Perhaps the most dramatic of these is that Saudi women are learning to drive motorcycles.

Saudi authorities have clarified that women will be permitted to drive motorcycles, vans and trucks in addition to cars. (They also cleared up a question over whether vehicles driven by women will have special number plates. They will not.)

The decision to lift the driving ban, announced seven months ago, is one of the most prominent moves by the ambitious young crown prince, Mohammed bin Salman, as he presses ahead with a much-trumpeted process of modernizing the kingdom.

…Meanwhile, a shortage of driving schools for women, the high cost of classes and Saudi authorities’ alleged intimidation of women who campaigned for the right to drive have dulled some of the initial euphoria.

The Post’s Loveday Morris visited a motorcycle driving school in Riyadh, Saudi Arabia, in April. For the first time, women there are l… https://t.co/YWgMBu9Y5Q

[Saudi Minister of Commerce and Investment Majid bin Abdullah] Al-Qassabi stressed the efforts exerted by the governments of both Saudi Arabia and Egypt to improve trade relations and exploit investment opportunities, overcome the obstacles and difficulties hindering the flow of bilateral investments and increase the volume of trade exchange between the two countries.

“King Salman and Crown Prince Mohammed bin Salman are keen to strengthen the Saudi-Egyptian partnership in various fields,” he said.

Legal Insurrection readers will recall that President Trump had a very friendly and productive meeting with Egyptian President Abdel Fattah al-Sisi early in his presidency. The meeting suggests the bonds between the nations, frayed during the Obama administration, continue to strengthen.

Finally, under the Crown Prince, Saudi Arabia has launched a program that may make it a global entertainment hub:

The goal is to create “a true cultural industry, with theatres, cinemas and training centres,” said Ahmad al-Mazid, who leads culture policy for Saudi Arabia.

…”Saudi Arabia gave me an opportunity to make my film here, it made sense on an economical model,” British actor Elba, who made his name as a gangster in the gritty American police series The Wire, told AFP at the event.

“I would definitely be here — why not?” added the Londoner, who has in more recent years turned his hand to directing and has a Twitter following of more than 2.5 million.

The investment programme feeds into a drive by powerful Crown Prince Mohammed bin Salman to modernise his homeland, both in terms of liberalising Saudi society and reducing the economy’s overwhelming dependence on oil.

In a world where Donald Trump is President and Kayne West is now quoting Thomas Sowell, a successful Saudi movie empire is certainly possible.

“In a world where Donald Trump is President and Kayne West is now quoting Thomas Sowell, a successful Saudi movie empire is certainly possible.”

Meh. The real test will be when young and old lovers alike can openly celebrate Valentines Day in the kingdom – instead of being beaten by the morality police.

i share a picture of Saudi Arabians, circa 1970.
http://www.onacrew.com/ONAMaggieAJeddah1975.jpg
There are others, including many pictures of tribal people all dressed in a manner that does not remotely resemble the hajib now common. As the prince himself stated, until the mid 70s, women pretty much wore what they want, with a light scarf projecting modesty. Women regularly wore sleeve less dresses and blouses in the summers, tribal peoples wore colorful clothing and no headware except when necessary to keep samd out. Women drove, rode horses, owned guns and engaged in market commerce without a minder.
This all suddenly changed when the Wahhabi imans, the crazies, began to influence the King as Palestinians and other crazy terrorists vied for supremacy. The propaganda and revisionist history is so though that books and film were destroyed and rewritten as fundamentalist fiction. Perhaps 99% of the population has no idea that Saudi Arabia was far more tolerant in times past. Likewise all the Muslim countries.

Yes, Iran under the Shah of that era, like a street scene in Paris …

Great post. Now let’s hope the changes underway can accelerate fast enough to save us.

“(They also cleared up a question over whether vehicles driven by women will have special number plates. They will not.)”

The Saudi’s taking on Hollywood. haha. Wodathunkit?? The heavens are laughing over the punk job.

This article is quietly one of the most important I have read in awhile. Biker chicks. Never quite sure how to process what’s going on over there but it is a game changer.