After several rewrites, the latest version of the law passed legal muster…for now 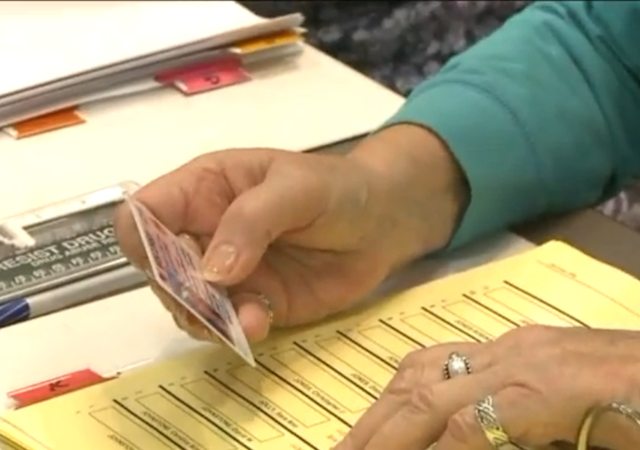 After several rewrites, the latest version of the law passed legal muster.

From the Dallas Morning News:

In its 2-1 decision, the appeals court reversed a lower court’s ruling which had blocked the controversial voter identification law after the Legislature had made changes to it in 2017.

“The Texas legislature passed a law designed to cure all the flaws cited in evidence when the case was first tried. The legislature succeeded in its goal,” the ruling written by Judge Edith H. Jones read. “Yet the plaintiffs were unsatisfied and successfully pressed the district court to enjoin not only SB 14, but also the new ameliorative law (“SB 5″). Because the district court’s permanent injunction and order for further relief abused its discretion, we reverse and render.”

The 2011 law has been bouncing through the court system for years. Mary blogged a year ago:

A federal judge has again rejected the 2011 Texas voter ID law, stating that the legislators meant to discriminate against minority voters.

U.S. District Judge Nelva Gonzales Ramos made this same ruling in 2014, which forced an appeal. The Fifth Circuit issued a stay against the order. The Supreme Court stepped in and allowed Texas to use the voter ID law.

But last July the Fifth U.S. Circuit Court of Appeals in New Orleans asked the judge “to re-examine the decision” since the judges found that “some of the evidence used by the judge wasn’t relevant.” The two sides reached a deal for the 2016 election, which allowed a voter to “sign a declaration swearing that he or she has had a reasonable difficulty that prevented obtaining one of the accepted forms of photo identification.”

Ramos went back to the drawing board but came to the same conclusion.

The law was again rewritten in an attempt remove what was deemed “discriminatory language,” only to be shot down yet again.

Anybody want to bet that some judge in Texas will suddenly discover the law is invalid about three days before the next election, thus ruling that voter ID cannot be used.

My money is on a Federal judge in Hawaii!

The Fifth Circuit would place an emergency stay on the ruling in less than a couple of hours. That sort of crap has been tried before, that is far too late to make a ruling which has an effect on an election.

Government-issued photo IDs are so hard to get that I have three of them.I have never met an adult who doesn’t have an ID of some sort. Give me a break.

Not to mention that if someone alleges they are so destitute they can’t afford the cost of a Driver’s License/Personal ID Card and has no other acceptable ID, there is a special for voting only state issued ID card. It was supposed to cost something like $5.00 but the cost can be waived for indigents.

1st: Long ago on this site I documented the time, money and effort I needed to get my elderly dad’s birth certificate after he let his driver’s license lapse. Not everyone has those resources available to them. My dad lived was born in the USA and his whole life here. He is a combat veteran of WW II.

2nd, when the venerable and non-partisan League of Women Voters says that new voter-id laws have made it more difficult for them to have registration drives in some states, it should give any ingenuousness person pause. Statement by Elisabeth MacNamara, President, LWVUS

Well d’uh, that’s what the laws are intended to do—make it more difficult to register illegal voters.

Good point. MacNamara assumes that every person who couldn’t register because they lacked ID was in fact eligible, but on what basis? It’s even less logical than assuming every such person was in eligible.

“Thank you Mr. Conyers and member of the committee for holding this discussion which will help focus our nation’s attention on voter suppression legislation that is sweeping this country. The right to vote and have your vote counted is the very foundation of our democracy and today it is under attack.”

I did not read further. There is no point. It’s clear when she refers to voter photo ID laws as “voter suppression”, and claims the right to vote is under attack, that she is not there to enhance understanding about the issue. She’s there to give a hyper-partisan political speech.

Citizenship carries with it lots of responsibilities. Most people believe showing a photo ID to vote is a fair burden. Gallup polled it as an 80-20 issue. Unsurprisingly, your position is the fringe extremist one.

BTW, Jimmy Carter and James Baker co-chaired the Commission on Federal Election Reform. The commission published it’s report in 2005. 18 out of 21 commission members voted to recommend photo voter ID laws to instill confidence in the integrity of elections. They cited a study of registered voters in Indiana, Maryland and Mississippi that found that only 1.2% of registered voters did not already have a form of photo ID that they could use to vote.

At this point, continuing to pretend it is about voter suppression is just a lame marketing gimmick by Democrats. You think telling minorities that Republicans are enacting voter integrity laws to suppress their vote will anger them and motivate them to vote against Republicans. But when it’s an 80/20 issue, I’m not sure how effective your marketing gimmick is. Good luck.

The League of Women Voters has not been non-partisan for a long time.

The League of Women Voters gave up “nonpartisan ” a long time ago. Who first observed that unless an organization is explicitly conservative, it will become liberal? Or, more accurately, leftist?

Most often attributed to the late Robert Conquest.

“Liberal” and “libertine” have very similar origins. The idea of being “liberal”, being accepting of others without prejudice is distorted by the left. The left will actively drive out those of opposing views. So a mix of liberals and conservatives will find the conservatives engaging the left in conversation, and the left trying to get rid of conservatives. I have heard that on the Supreme Court, especially after the 2000 election, the left bloc is very circumspect about writing their decisions. There are few if any dissents from the majority. The right will write an opinion, and have dissenters, who will either vote for or against, but say “I agree, but I think the reasoning is wrong, and should be…” The Left is incredibly intolerant, unless they are protecting one of their own.

None of that is true. “Liberal” in politics originally meant (and in much of the world still means) what is now known in the US as “conservative” or “libertarian” views. The socialists stole the term, just as they steal everything else that isn’t nailed down.

And the four “liberals” on the Supreme Court often do disagree with each other, and one or more of them often does vote with “conservatives”. Many decisions are not made on bloc lines.

Hence, why I make the distinction between “liberal” (as in classical liberalism) and “Statist” or “Progressive” (as in the Marxist-Leninist format of the modern alleged liberal).