Netanyahu: IDF soldiers “protect us from those who pretend to speak for human rights while holding a Nazi flag” 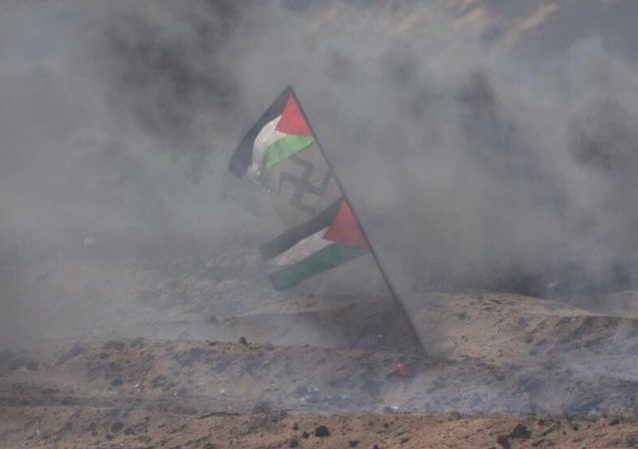 On Friday, April 6, 2018, Hamas staged another “protest” under the banner of the Great March of Return.

We already have documented how the previous March 30 “protest” was in fact an attempt to infiltrate terrorists into Israel under cover of civilians. Almost all of the people killed on March 30 were military members of Hamas or other terror groups:

In order to conceal additional attempts, Hamas arranged for a massive burning of tires for April 6, that blanketed the area in thick black smoke. 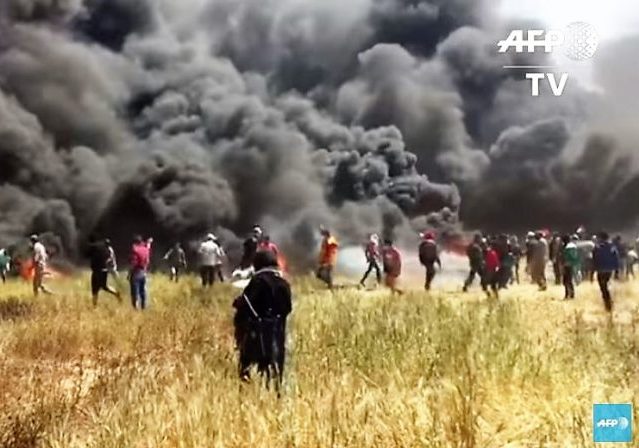 Of the reported 9 people killed on April 6, at least three are positively identified as terror group members (it’s likely, as before, that number will increase as more information becomes available). This brings the total number to at least 19 of the 28 people reported killed near the border fence. 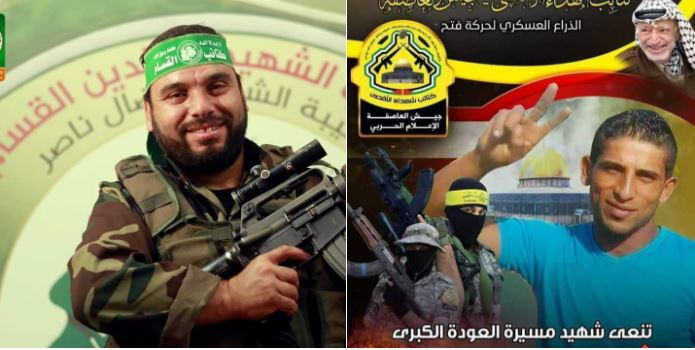 There also was video of attempts to cross the border by an armed terror cell on both March 30 and April 6. (There also was an attempt on April 4, not part of one of the Marches.) 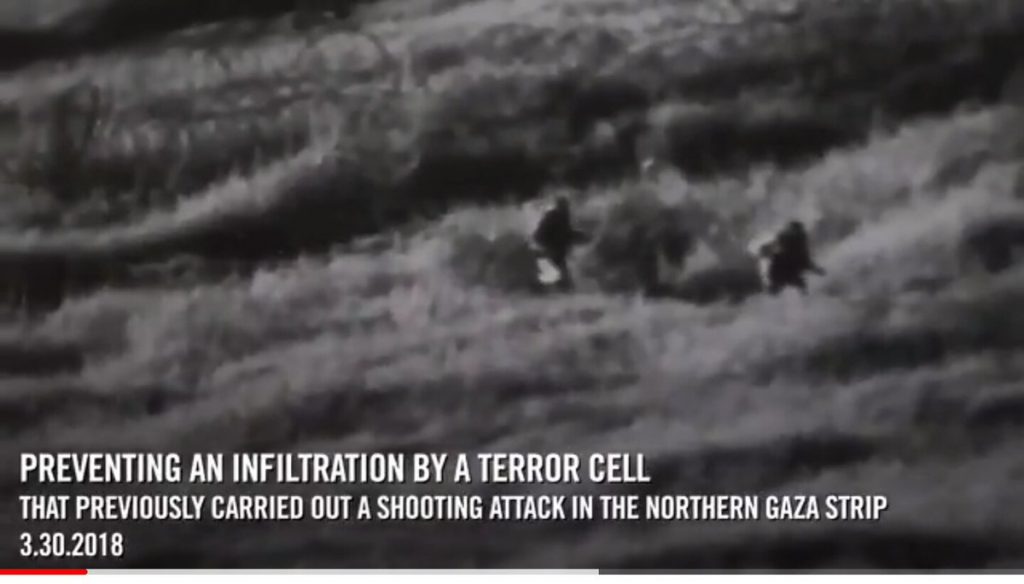 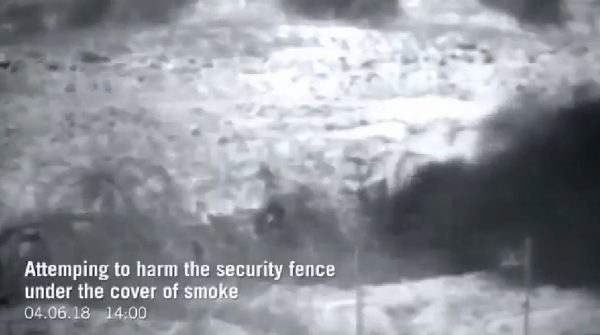 While it’s clear that the vast majority of people killed were military members of terror groups, Palestinian photo journalist Yaser Murtaja was shot and killed just 100 yards from the border, in an area covered by black smoke. The circumstances are not clear as of this writing. The Washington Post reports (emphasis added):

The Israeli military had dropped leaflets in the lead-up to the protest instructing Palestinians to stay at least 300 meters (328 yards) away from the fence and warning live ammunition would be used.

On Friday, thousands of tires were set ablaze, creating a thick black fog that protesters hoped would guard them from the Israeli snipers.

Shady al Assar, 35, who was with Murtaja just before he was shot, said they were about 100 meters from the border at Khan Younis, in the southern Gaza Strip, when he lost sight of his friend in the thick black smoke. Assar said he picked up his camera to photograph an injured person being carried toward him before realizing it was Murtaja.

Murtaja was wearing a helmet and a protective jacket when he was shot, according to multiple journalists that saw him. However, the bullet entered his side, rendering the protective plates on his front and back useless, they said.

There was an suggestion by the Israeli Defense Minister that Murtaja might have been operating a drone over Israeli soldiers, but colleagues of Murtaja told a journalist that Murtaja operated a drone the prior week on March 30, but not on April 6.

Even in light of the widespread documented use by Hamas during the Great March of Return of children, this image nonetheless is shocking: 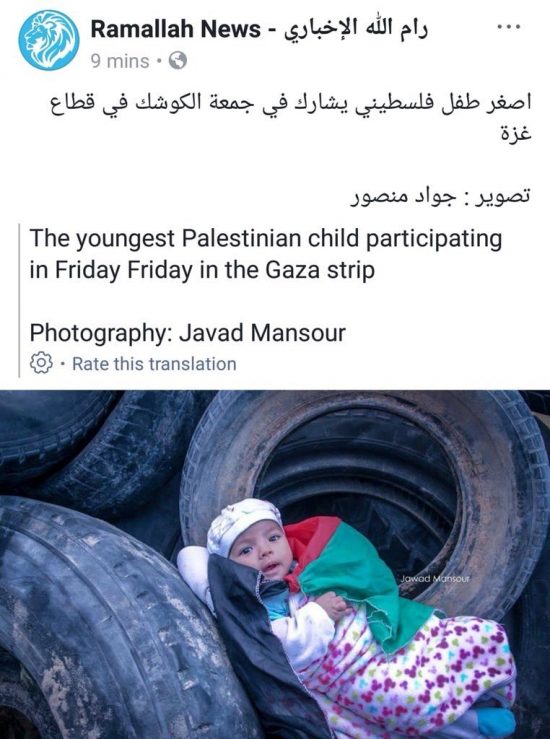 It only would take one successful breach to permit a kidnap attempt or terror attack. Hamas and others have a long history of such attempts, and have moved to the present strategy because the underground barrier Israel is building will stymie tunnel attempts. Israel also has destroyed several tunnels in recent months that stretched under the border.

It’s clear that Hamas is motivated, as its charter indicates and hits history shows, by a genocidal hatred of Jews. Crowds chanted for the return of Mohammed’s Army: 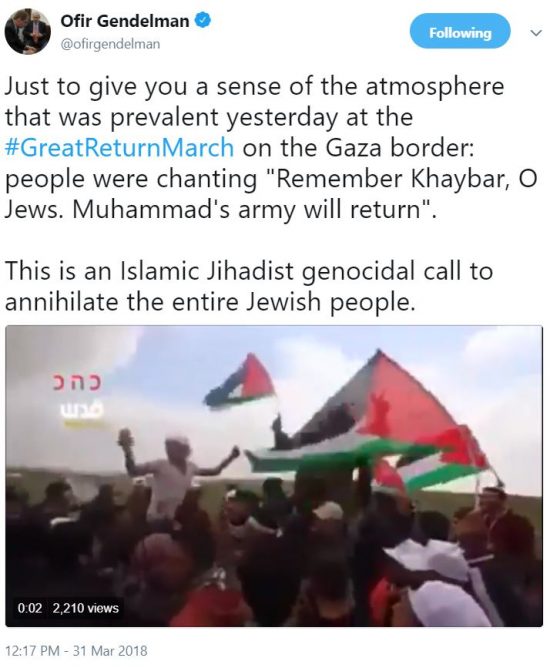 On April 6, 2018, Hamas leader Yihya Sinwar appeared in one of the tents near the border and proclaimed that the participants would tear down the border fence and rip the hearts out of Israelis. 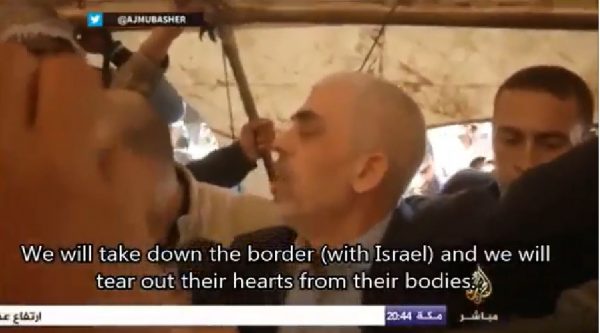 That same day, Hamas or its supporters planted Palestinian flags near the border, including one that included a Swastika.

When I first saw the photo circulating, there were claims that it was a photoshop or fake. 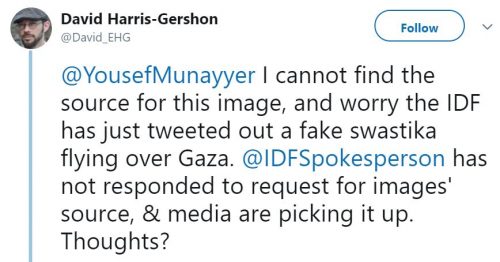 Those claims have mostly disappeared since a video, from a different angle, was released (initially, apparently, by retired IDF spokesperson Peter Lerner]

The head of the foreign desk for the far-left Haaretz newspaper seemed upset that it turned out to be true. Not because it represented the genocidal reality of Hamas, but because it might help Israel. 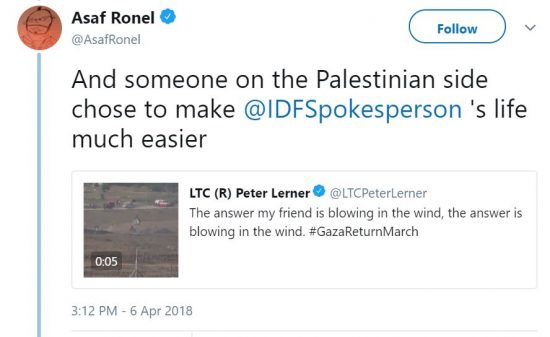 There has been mostly silence from the “pro-Palestinian” side since the Swastika flag photo is backed up by video.

There also is almost complete silence from the mainstream media, which seeks to portray the “Great March of Return” as a peaceful protest.

But the image will live on as a symbol of what Hamas really seeks. 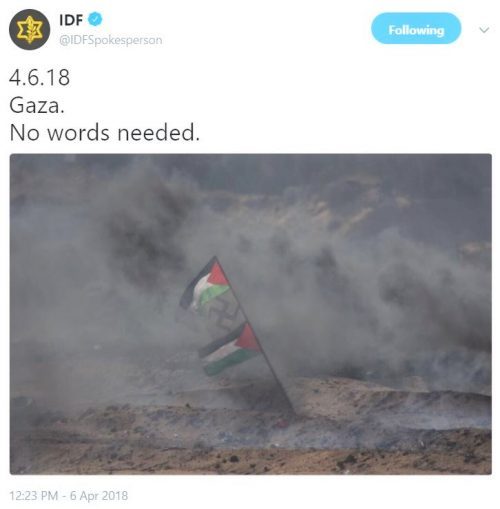 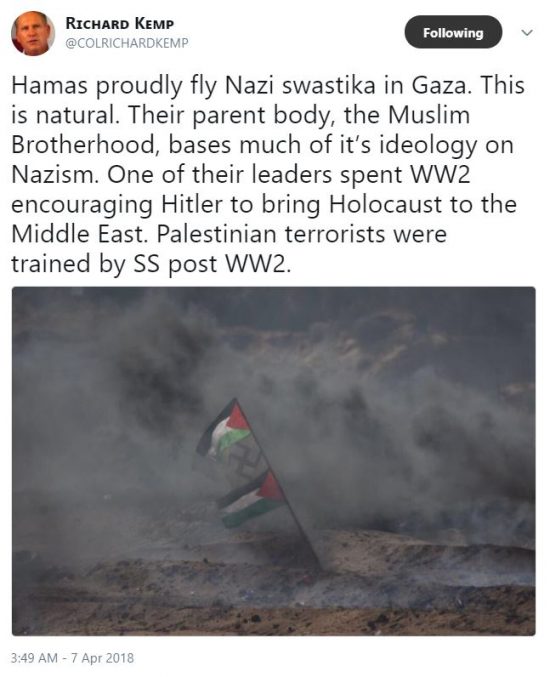 “Our country is a wonder. Today everyone sees it. It is a state which is sought after by powers and entire continents – and not only because of the wonderful mufleta, (a Moroccan pastry eaten at the Mimouna), though also because of that. We are a small nation but full of spirit, and our achievements are a source of amazement around the world. Everyone knows this and feels it when they go abroad and return to Israel and see the development, the roads, the enormous successes.

“This does not mean that there are no challenges facing us, we see them right before us today. And first of all, I salute the IDF soldiers who guard us day and night. They protect us from those who pretend to speak for human rights while holding a Nazi flag. This is the bare and unadulterated truth. They talk about human rights, but in fact they want to trample the Jewish state. We will not give in to them, we will stand firm. We will keep our land, we will continue to build it together with all the tribes of Israel and all the citizens of Israel gathered around this table and around so many other tables.

In some mysterious process I still don’t understand, the Age of Trump has forced all sorts of self-reveals across the neosocialist/ idenitity sprectrum. Note that this is not a West Bank operation. The fact that it isn’t highlights the non-existence of any “Palestine”. The PA and Hamas hate each other almost as much as they hate Jews. Palestine has no state legitimacy. To pretend that it does is to welcome just one more failed state in a region already full of them.

“While it’s clear that the vast majority of people killed were military members of terror groups, Palestinian photo journalist Yaser Murtaja was shot and killed just 100 yards from the border”

Surely professional propagandists are as much members of terror groups as soldiers.

A Nazi flag flying above a Palestinian “human rights” protest is hardly surprising. Only question is whether it was Jewish Voice for Peace, LInda Sasour or Code Pink who supplied it….