The attack will set back Assad’s chemical weapon production “for years.” 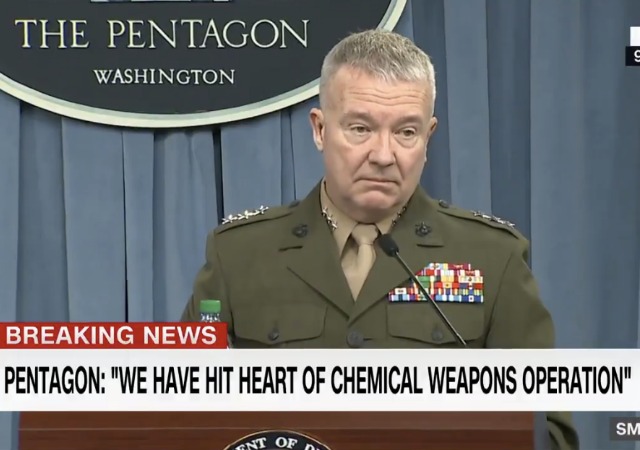 The Pentagon stated this morning that the coalition “successfully hit every target” in Syria.

Secretary of Defense James Mattis said that the U.S. suffered no losses during the strikes, which “targeted the heart of Assad’s programs to develop and produce chemical weapons.” Overall, we launched 105 missiles.

The Pentagon says the U.S.-led airstrikes on Syria “successfully hit every target.”

Chief Pentagon spokeswoman Dana White said Saturday that the strikes were launched to “cripple Syria’s ability to use chemical weapons in the future.”

The U.S., France and Britain launched military strikes on Saturday morning in Syria to punish President Bashar Assad (bah-SHAR’ AH’-sahd) for an apparent chemical attack against civilians last week and to deter him from doing it again.

White says the strikes do not “represent a change in U.S. policy or an attempt to depose the Syrian regime.” But she says, “We cannot allow such grievous violations of international law.”

She also called on Russia to “honor its commitment” to ensure the Assad regime gives up chemical weapons.

Lt. Gen. Kenneth McKenzie, the director of the Joint Staff, said the U.S. targeted the Barzah research center after officials “assessed that there probably some chemical or nerve agents in that target.”

McKenzie described the attack as a “clear message to the Syrian regime” and it will set back Assad’s chemical weapon production “for years.”

A perfectly executed strike last night. Thank you to France and the United Kingdom for their wisdom and the power of their fine Military. Could not have had a better result. Mission Accomplished!

So proud of our great Military which will soon be, after the spending of billions of fully approved dollars, the finest that our Country has ever had. There won’t be anything, or anyone, even close!

France and the United Kingdom joined us in the attacks. UK Prime Minister Theresa May says the country is “confident” that the airstrikes was successful. From the BBC:

Speaking in Downing Street, Mrs May said the “limited and targeted strikes” had degraded Syria’s ability to use chemical weapons.

“This collective action sends a clear message that the international community will not stand by and tolerate the use of chemical weapons,” she said.

Drawing a link with the recent nerve agent attack in Salisbury, Mrs May added: “We cannot allow the use of chemical weapons to become normalised – either within Syria, on the streets of the UK or elsewhere.”

Spanish Prime Minister Mariano Rajoy also portrayed the airstrikes as “justified” due to the “crime against humanity” in Douma last week. He said the attack “to these atrocities is legitimate and proportionate.”

The Pentagon said America is ready if anyone should retaliate.

Reporter: Can we expect any kind of retaliation after Syria strike?

Lt. Gen. McKenzie: “I can’t speak to that, but I can tell you that we’re ready for it. We’re postured both in the region and globally … we’re ready for anything.” https://t.co/iOaONV0wMf pic.twitter.com/5BXa9LSqmN

Russia, one of Syria’s last allies, still believes someone staged the chemical attack from last week. The Russian embassy in the U.S. stated that “[T]he worst apprehensions have come true.”

Statement by the Ambassador Antonov on the strikes on #Syria:
A pre-designed scenario is being implemented. Again, we are being threatened. We warned that such actions will not be left without consequences.
All responsibility for them rests with Washington, London and Paris. pic.twitter.com/QEmWEffUzx

Putin responded to Saturday’s attack by calling the strikes “an act of aggression against a sovereign state that is at the forefront of the fight against terrorism.”

“The current escalation of the situation around Syria has a devastating impact on the whole system of international relations,” Putin said. “History will put everything in its place, and it has already laid heavy responsibility on Washington for bloody reprisals against Yugoslavia, Iraq and Libya.”

Assad believes the strikes “would ‘only increase the determination of Syria and its people to continue fighting and crushing terrorism in every inch of the country.'”

Iranian Supreme Leader Ayatollah Ali Khamenei, Syria’s only other ally, declared that “the United States and its allies had committed a ‘major crime’ in Syria.”

So do we have a good site for bomb damage assessment and strike information? One that isn’t Russian and claims that 109 out of 105 cruise missiles were shot down by the glorious Air Defense Wing of the People’s Republic of Democratic Syria et al…

To answer my own question, the Washington Post has a nice writeup.

(if this link works)

I hope somebody gets John Kerry* on air to explain his assertion while Secretary of State that, thanks to him and the Obama administration, Syria no longer held chemical weapons.

*Did you know he was a Viet Nam veteran?

Did you know that Kerry served two tours of Viet Nam duty in less than four months? We Marines were so slow it took us thirteen months to complete one tour of duty.

Hey! Lay off picking on the sainted veteran, John Kerry. Math is HARD.

We didn’t name those patrol craft “Swift Boats” for nothing, MSO. Faster than a speeding bullet, Marine. Kerry had to wrap things up quickly so he could get to Paris to begin collaborating with the enemy.

And he’s never stopped since.

The fact that Chuck Schumer is OK with this ought to be a yuuuuge red flag for everyone.