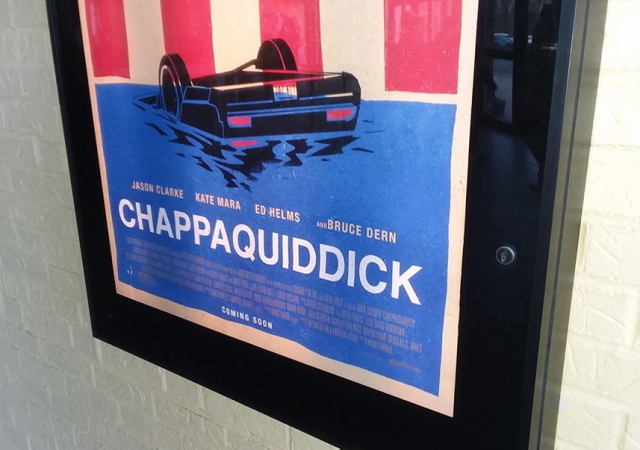 The new film “Chappaquiddick” directed by John Curran and written by Taylor Allen and Andrew Logan opened this weekend. It’s a straightforward examination of the events surrounding the death of Mary Jo Kopechne when Ted Kennedy crashed his car off a bridge on Martha’s Vineyard.

It can be summed up in one word. Brutal.

Let me begin by saying this film is going to do extraordinarily well. First, because it’s a well made film and second because there is tremendous interest in the story. I saw the movie at an out of the way multi-theater cinema in northern Massachusetts. When I arrived for the 4:30 pm matinee, I got the second to last ticket. The next showing at 7:30 pm was already sold out.

The story opens on the weekend of the accident. It sets the stage with a party being thrown for the “Boiler Room Girls” who worked for the recently assassinated Bobby Kennedy. Mary Jo Kopechne explains to a friend that she has no interest in returning to national political work in Washington, DC and is happier working on a mayoral campaign in New Jersey.

Ted Kennedy, who has just participated in a sailboat regatta shows up at the party, toasts all the girls as part of the Kennedy family and quickly finds himself sitting on the couch with Kopechne. They eventually slip away from the party for a drive into American history.

When the infamous crash occurs, the film increases in tempo and the rest of the story is the aftermath. This is where the scandal is only beginning, for it is everything that comes afterwards that reveals the depravity of Kennedy and his team.

Aside from a few flashbacks where Kennedy relives the accident, Mary Jo Jopechne becomes an afterthought. Everything that transpires after her death is about saving Ted Kennedy’s political future and keeping him out of jail.

Two associates who were with him the night of the party, Joe Gargan, a lawyer and “adopted” Kennedy family member and Paul F. Markham, US Attorney for Massachusetts, who is expertly played by stand-up comic Jim Gaffigan. They rely on Kennedy to report the accident but of course, he doesn’t.

Everything Kennedy does in the hours after the accident only makes the situation worse. He is like a child who knows he has done something that will mean real trouble but instead of owning up, continually tries to deny reality or somehow scheme his way out of it.

Once local authorities discover the wreck, Kennedy makes his way to the Edgartown police department where he offers the chief a written statement and is released. He returns to the Kennedy compound in Hyannis. There, he is confronted by Joseph Kennedy Sr., who is played by Hollywood veteran Bruce Dern. By now, the senior Kennedy is in a wheelchair and in failing health. Dern has exactly three lines in the film, yet turns in one of the most powerful performances.

Also waiting for him at the compound is an army of lawyers and political advisers led by Robert McNamara, who is portrayed by Clancy Brown. You may recall Brown as the primary villain in the 1986 movie Highlander and for voicing Mr. Krabs on Spongebob Squarepants. He turns in an excellent performance as McNamara, who directs the political spin campaign from that point.

Kennedy attends the funeral for Kopechne and wears a neck brace against everyone’s advice, a move he ultimately regrets. Shortly after that, it is Kennedy himself who comes up with the idea of making a nationally televised statement about the incident, a concept which is cheered by his advisers.

He toys with the thought of using this address to resign from the senate but ultimately decides to put the onus of that decision on the voters of Massachusetts. It is at this point, that Kennedy finds his way out and it is presented as cynically as it sounds.

Jason Clarke, the actor who plays Kennedy is outstanding. His portrayal of the senator could easily have fallen into the realm of caricature. Instead, Clarke shows us a real man who knows he is doomed. Kate Mara is also excellent as Kopechne and remains memorable, despite little screen time.

Director John Curran deserves credit for telling the unvarnished story. His film career is guaranteed to take off after this project.

Even if you know the whole story, as many Americans do, Chappaquiddick is worth your time and ticket money. I give it four out of five stars. Watch the trailer below:

The movie shrewdly plays it straight. No wacky conspiracy theories, no scenes showing a sloshed Teddy staggering to the Oldsmobile. It makes what follows all the more devastating.

I have not seen this flick and have no intention of doing so, but I am curious on one point: did they mention that two people died that night? Mary Jo was pregnant, which has been glossed over by everyone, starting the afternoon following the “accident”.

[sarcasm]
No clue who the father of her basted may have been.
[/sarcasm]

It’s too bad Drunken Ted is buried in Arlington. He defiles that sacred ground.