Tee worn to honor a child with brain cancer 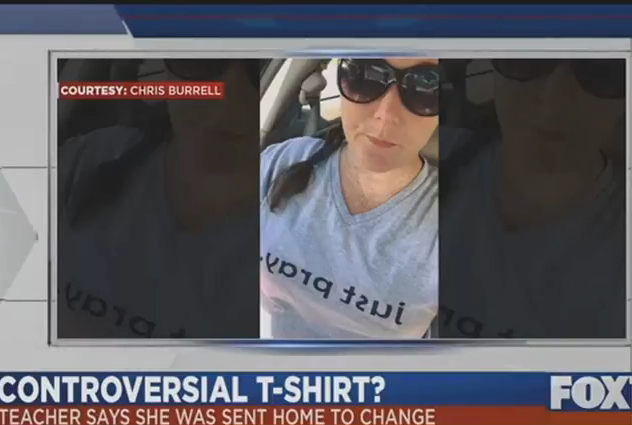 An Alabama school teacher was sent home to change out of a T-shirt she was wearing to honor a child diagnosed with an inoperable brain tumor.

A local teacher’s Facebook post is causing quite the controversy. She claims she was sent home from school to change her shirt because it had the word “pray” on it.

When teacher Chris Burrell picked her shirt to wear to school on Monday morning, it reminded her of 11-year-old Aubreigh Nicholas. It has “just pray”on it, in support of “Aubreigh’s Army,” a fundraiser to help the young dancer from Semmes diagnosed with a rare and inoperable brain tumor last year.

But that’s not the way the school’s principal saw it.

“So at the point of looking and seeing ‘pray’ on it, the principal said, can you put on a sweater or something, knowing that there are other people who object to that…we have to be cognizant of everyone’s beliefs or everyone’s thoughts in a public school,” said Peek.

Peek tells us the principal was just following the rules, which say teachers and students can’t wear clothes that reflect a certain belief.

Wonder how many teachers have been sent home for wearing a Planned Parenthood shirt.

Abortion is not a religion. Government entities are entitled to advocate it, if they choose.

“knowing that there are other people who object to that”

Who are these likely imaginary people?

There are people who object to prayer, but not many. That’s not the point, though. Even if nobody objected, it was illegal for the teacher to advocate prayer while acting as an authority figure for the school.

Hold up. A teacher, while in the classroom, is not speaking for herself but for the school and with the school’s authority, and whatever she advocates is reasonably understood by the students as the school’s policy. And a government school cannot endorse religious activity. If I were the principal I’d have done the same, and there is not a court in the country that would not have ordered the school to do this.

What disturbs me is not that this happened to a teacher, but that the superintendent said “teachers and students can’t wear clothes that reflect a certain belief”. I think the Supreme Court’s been quite clear about this: Teachers may not endorse religion; students not only may, but may not be restrained from doing so, as long as it’s clear they’re speaking for themselves and not for the school. If this were a student who’d been sent home for wearing such a shirt, there’d be a good lawsuit in it.