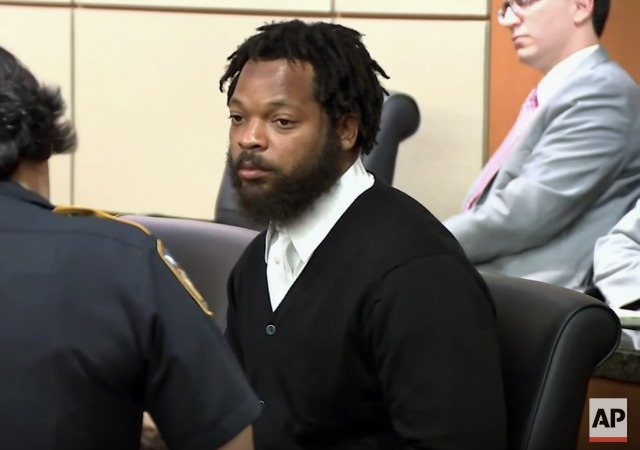 A Harris County grand jury indicted Philadelphia Eagles defensive end Michael Bennett on a federal charge of injury of the elderly at the 2017 Super Bowl that took place at Houston’s NRG Stadium.

Bennett allegedly forced his way through security to get on the field to celebrate with his brother and the New England Patriots. He allegedly injured a 66-year-old paraplegic woman on the security team.

From The Houston Chronicle:

Houston police Chief Art Acevedo said Bennett, after the Patriots’ win, “forcibly opened locked doors” in the tunnels of the stadium, then ignored security and pushed several security personnel to get to the field. Acevedo also said Bennett told security, “Y’all must know who I am, and I can own this (expletive). I’m going on the field whether you like it or not.”

Acevedo said there is no video of the incident, but that it was witnessed by a police officer, who checked on the health of the security personnel instead of attempting to detain Michael Bennett on the spot.

The 66-year-old woman sought medical treatment and was diagnosed with a strained back.

During a press conference, Acevedo described Bennett as “morally bankrupt” and found it “pathetic” that someone would put their “hands on a 66-year-old paraplegic and just act like they don’t exist and treat them this way.”

Bennett turned himself in and appeared before a judge on Monday. He received a $10,000 bond and can travel between his home in Hawaii and Houston for his court appearances.

Last September, Bennett accused Las Vegas officers of racially profiling and excessive force after the Mayweather-Mcgregor fight in August. The police answered a call of a possible shooter around Drai’s nightclub in the Cromwell casino:

After clearing the casino, a team of officer’s started heading toward Drai’s nightclub, and while they were on the way there, they located Bennett.

“As they moved toward the nightclub, an individual later identified as Bennett was seen crouched down behind a gaming machine as the officers approached,” McMahill sald. “Once Bennett was in the officer’s view, he quickly ran out the south doors, jumped over a wall onto Flamingo Road East of Las Vegas Boulevard into traffic.”

According to McMahill, the officers viewed Bennett’s actions as suspicious, which is why he was handcuffed.

“Due to Bennett’s actions, and the information the officer’s had at the time, they believed that Bennett may have been involved in the shooting and they gave chase,” McMahill said. “Bennett was placed in handcuffs and detained while officers determined whether or not he was involved in the incident.”

Bennett claimed that the police singled him out and one even threatened to “blow his head off.” The NFL backed Bennett’s story, but the Las Vegas Metro Police Department (LVMPD) has strongly come out and denied all of Bennett’s claim. The two arresting officers are Hispanic males.

Undersheriff of the LVMPD even said that at the scene Bennett told the officers he understood what happened after the officers explained the situation.

A few weeks later, Fuzzy blogged about how additional body cam footage and security camera footage showed that the officers did not racially profile him.

In February 2017, Bennett boycotted a trip to Israel and voiced his support for the BDS movement. He changed his mind about the trip after reading an Israeli paper “where a Israel’s Strategic Affairs and Public Diplomacy Minister Gilad Erdan was quoted as saying: ‘The ministry which I lead is spearheading an intensive fight against the delegitimization and BDS campaigns against Israel, and part of this struggle includes hosting influencers and opinion-formers of international standing in different fields, including sport.'”

Bennett claimed he would not be “used” that way.

Miami Dolphins wide receiver Kenny Stills tweeted that he agreed with Bennett and said that was in with him. Another player didn’t go due to his pregnant wife.

People, it’s possible for both this guy to be a scumbag deserving of justice AND it be a monumentally stupid idea to have a 66 year old paraplegic woman serving as security to a high value target area at an NFL game. NFL fans are some of the rowdiest, drunkest, craziest fanatics in sports (non-US soccer fans are worse, though).

Houston should think a little more about logistics instead of feel-good BS that could compromise security. Michael Bennett should think more about the kind of man he ought to be and less about virtue signaling whilst manhandling frail old people.

I find it curious how so many are demanding women as firefighters, women in combat positions in the Army, transsexuals in the Army and so forth. The common overriding thought is that anyone can do any job and should they be denied then it is bigotry, racism, misogyny, ageism, or whatever. It has become a common cry to allow anyone into any job and those who come out against this idea are pilloried.
>
Now we have a 66 year old paraplegic woman on the security staff being injured so people are asking why there should be this women in this position and stating how wrong it was having her there. While we do not know what her role or position was or any other details of her situation, people are still wondering and even critical about the wisdom of having her in the position she was occupying Curious.

Nope, the virtue-signaling is thick enough to cut with a chainsaw, but I still don’t see it. A ten year sentence isn’t justice, it’s perversion.

Like it or not, an American has a right to be a jerk; and jail is for criminals, not jerks.

A condition for Law to be respected is that it be respectable. And this isn’t.

Your right to be a jerk ends at the tip of my nose. Purposely knocking a paraplegic out of her wheelchair is not being a jerk. It is a battery. BTW, I don’t know many able bodied security officers who could stop an NFL lineman determined to go past him.

I haven’t seen any published news reports claiming Bennett knocked her out of her wheel chair. He “pushed through security.” That’s it.

Ten years may not be justice, that’s just the max sentence he faces. Considering the injury doesn’t seem extremely severe (sprained shoulder from what I read), I doubt he will get that much time.

The sad part of this is that he likely still doesn’t see what he did wrong. Entitlement and arrogance are effective blinders when someone wants to separate themselves from the responsibilities of being “a person.”

I was riding the bus yesterday in PDX and at a stop, the driver asked the people outside to wait so that the current passengers could embark. An elderly black man ignored this and got on the bus, which then created a bottleneck, and then he became angry that people were shoving him trying to get through the bottleneck that he created. The driver then said, “this is why I asked you to wait,” whereupon the black man said “you are a racist.” So there we have it, asking someone to act like a member of the human race is now racist. A white woman then tried to explain to him that it wasn’t racism, but he apparently already had the narrative written out in his head, and he called her a racist too. So once again, I am caught up between whether Portland, OR or Oberlin College causes me more embarrassment by association.

The security firm likely was responding to a hiring directive where they needed to check a certain number of boxes. I know that a number of firms will stipulate a requirement of being able to lift xx pounds (in order to move barricades, etc.) in order to only have employees suitable for the task. Perhaps having her in this position was akin to the ACLU pat and frisk request, wherein a “good intention” ultimately puts more people at risk. Had she been killed during an event like a “Who Concert” I am certain that her relatives would have been suing immediately for having her in a vulnerable position.

At least she wasn’t doing brain surgery, yet.

You are definitely from my part of the country! And I appreciated your example of the bus rider who figured he always get to go first, regardless of letting others get off first. I see this on elevators a lot. People march in as the doors open, without even checking if others are trying to get out.

How does “he pushed through security” translate to felonious assault on this particular 66 year old person? There are NO details provided which even remotely rise to an indictable offense. Total B.S. I’m not excusing his conduct by the way. I would wager this 66 year old got the “security job” because of some sort of political or family connection which may even involve local Houston law enforcement and this is just a case of these insiders wanting to help “grandma” get a nice little retirement cushion with a lawsuit or personal injury settlement.

The self refuting Marco100. First complain that we haven’t been provided with any details that would make this an indictable offense. Then engage in wild fact-free, baseless speculation about how the elderly paraplegic only got the job because of her political or family connections.

We have more details that support the notion this is an indictable offense than you have for your wild fantasy alternative.

“…I’m not excusing his conduct by the way…”

What conduct is there not to excuse, if you also claim that “[t]here are NO details provided which even remotely rise to an indictable offense.”

Again, this is self refuting. Obviously there are some details if you feel compelled to say you’re not excusing his conduct. Do you imagine that just because the government hasn’t provided all the details about Bennett’s conduct that they believe meets the elements of the crime, then those additional details don’t exist? The Sheriff says he’s confident the prosecution can make their case against Bennett. You admit his conduct was inexcusable. So we’ll see if Bennett’s inexcusable conduct meets the elements of the crime, and if the prosecution can make their case.

On the other hand you have NO details to support your contention that “this is just a case of these insiders wanting to help “grandma” get a nice little retirement cushion with a lawsuit or personal injury settlement.”

No one builds up a retirement fund from part time work like this. Ten home games a year. The upside is being able to watch the game for free, and a few (very few) extra bucks.