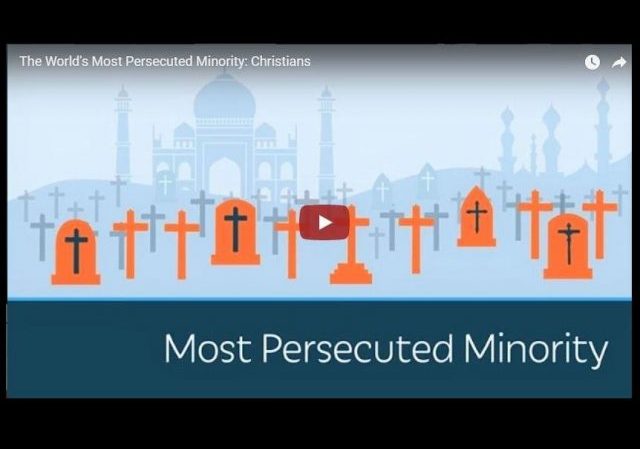 In October 2017 we reported on a lawsuit filed by Prager University against Google and YouTube [Complaint] based on restrictions YouTube division had put on PragerU videos:

PragerU, an online purveyor of educational videos run by its namesake, Dennis Prager, filed a complaint against Google and YouTube Monday. The complaint alleges unlawful censorship and discrimination of first amendment rights.

YouTube, which is a subsidiary of Google, has on numerous occasions censored PragerU videos. Often, restricted or demonetized videos aren’t even what most would consider controversial subject matter, but offers opinions from a conservative point of view. “Why America Must Lead,” “The Ten Commandments: Do Not Murder,” “Why Did America Fight the Korean War,” and “The World’s Most Persecuted Minority: Christians” have all been dinged by YouTube….

“Google and YouTube use restricted mode filtering not to protect younger or sensitive viewers from ‘inappropriate’ video content, but as a political gag mechanism to silence PragerU. Google and YouTube do this not because they have identified video content that violates their guidelines or is otherwise inappropriate for younger viewers, but because PragerU is a conservative nonprofit organization that is associated with and espouses the views of leading conservative speakers and scholars,” said Eric George of Browne George Ross, the firm representing PragerU.

I have long argued that the censoring or restricting of content by internet oligopolies poses a greater current threat than government action because these private oligopolies, which control so much of our communications, are not covered by the 1st Amendment.

The full court opinion (pdf.) is embedded at the bottom of this post.

The Court summarized the basis of the motion to dismiss and ruling as follows:

The Court held that there was no 1st Amendment claim because PragerU had not pleaded sufficient facts to show that Google/YouTube were “state actors”:

“It is, of course, a commonplace that the constitutional guarantee of free speech is a guarantee only against abridgment by government, federal or state.” Hudgens v. N.L.R.B., 424 U.S. 507, 513 (1976). Plaintiff does not dispute that Defendants are private entities. See Compl. ¶¶ 18–19; ECF No. 25 at 14 (conceding that “Defendants are not public entities”). However, in some circumstances, a private entity can be a state actor for constitutional purposes. Specifically, “‘[t]he Supreme Court has articulated four tests for determining whether a private party’s actions Plaintiff contends that Defendants are state actors under the “public function” test. See Compl. ¶ 87 (stating that “Defendants further act as state actors because Defendants and the YouTube site perform an exclusively and traditionally public function”). Under the public function test, “[p]rivate activity becomes a ‘public function’ only if that action has been ‘traditionally the exclusive prerogative of the State.’”….

Plaintiff does not point to any persuasive authority to support the notion that Defendants, by creating a “video-sharing website” and subsequently restricting access to certain videos that are uploaded on that website, Compl. ¶¶ 35, 41–46, have somehow engaged in one of the “very few” functions that were traditionally “exclusively reserved to the State.” Flagg Bros., 436 U.S. at 158. Instead, Plaintiff emphasizes that Defendants hold YouTube out “as a public forum dedicated to freedom of expression to all” and argues that “a private property owner who operates its property as a public forum for speech is subject to judicial scrutiny under the First Amendment.” Opp. at 18….

In sum, Plaintiff has not shown that Defendants have engaged in one of the “very few” public functions that were traditionally “exclusively reserved to the State.” Flagg Bros., 436 U.S. at 158. Defendants do not appear to be at all like, for example, a private corporation that governs and operates all municipal functions for an entire town, see Marsh, 326 U.S. at 507–09, or one that has been given control over a previously public sidewalk or park, see Evans v. Newton, 382 U.S. 296 (1966), or one that has effectively been delegated the task of holding and administering public elections, see Smith v. Allwright, 321 U.S. 649, 664 (1944). Instead, Defendants are private entities who created their own video-sharing social media website and make decisions about whether and how to regulate content that has been uploaded on that website. Numerous other courts have declined to treat similar private social media corporations, as well as online service providers, as state actors….

The Court likewise declines to find that Defendants in the instant case are state actors that must regulate the content on their privately created website in accordance with the strictures of the First Amendment. As a result, the Court concludes that Plaintiff has failed to state a claim against Defendants under the First Amendment.

As to the Lanham Act claim, the court rules:

Plaintiff also asserts a cause of action against Defendants for false advertising in violation of the Lanham Act, 15 U.S.C. § 1125(a)(1)(B). Section 1125(a)(1)(B) forbids a person from making any false or misleading statements of fact “in commercial advertising or promotion” that “misrepresent[] the nature, characteristics, qualities or geographic origin of his or her or another person’s goods, services, or commercial activities.”…

Although the section of Plaintiff’s complaint dedicated to the Lanham Act does not identify any specific representations made by Defendants, see Compl. ¶¶ 115–19, Plaintiff’s opposition to Defendants’ motion to dismiss points to a handful of discrete alleged instances of false advertising by Defendants. Opp. at 24. In particular, Plaintiff identifies (1) YouTube’s suggestion that some of Plaintiff’s videos are “inappropriate”; (2) YouTube’s policies and guidelines for regulating video content; (3) YouTube’s statement that “voices matter” and that YouTube is “committed to fostering a community where everyone’s voice can be heard”; (4) YouTube’s statement on its “Official Blog” that YouTube’s “mission” is to “give people a voice” in a “place to express yourself” and in a “community where everyone’s voice can be heard,” and that YouTube is “one of the largest and most diverse collections of self-expression in history” that gives “people opportunities to share their voice and talent no matter where they are from or what their age or point of view”; and (5) Defendants’ representations in the terms of the agreements between Plaintiff and Defendants that Defendants seek to “help you grow,” “discover what works best for you,” and “giv[e] you tools, insights and best practices for using your voice and videos.” Id. (citing Compl. ¶¶ 3, 11, 14, 28, 104, 112). The Court agrees with Defendants that Plaintiff has failed to allege sufficient facts to support a Lanham Act false advertising claim based on any of these representations.

The court also granted leave to amend on the Lanham Act claim.

As to the state claims, the court declined to exercise jurisdiction in the absence of federal claims:

Here, the factors of economy, convenience, fairness, and comity support dismissal of Plaintiff’s remaining state law claims. This case is still at the pleading stage, and no discovery has taken place. Federal judicial resources are conserved by dismissing the state law theories of relief at this stage. Further, the Court finds that dismissal promotes comity as it enables California courts to interpret questions of state law. This is an especially important consideration in the instant case because Plaintiff asserts a claim that demands an analysis of the reach of Article I, section 2 of the California Constitution in the age of social media and the Internet.

If an amended pleading were to somehow reinstate the federal claims, then the court would revisit keeping the state claims.

PragerU issued this press statement, which seems to suggest both an appeal and a filing in state court:

“Today, a Federal Court ruling was issued regarding our lawsuit brought against Google Inc. and its subsidiary YouTube, LLC. Already, some headlines in the media would have you believe we have lost our case outright. Quite the contrary, this is only the first step in the process and we join our legal team in its optimism for the future prospects of our lawsuit. We thank the Honorable Judge Koh for her thoughtful ruling, which allows PragerU, in essence, to continue our efforts. Far from an unexpected setback, we look forward to arguing the merits of our case in both state and Federal Court, as well as the 9th Circuit, or even the Supreme Court if that is what it takes to ensure every American’s freedom of speech is protected online. We remain firmly convinced of the importance of our cause and as such, we look forward to our next day in court.”

“PragerU’s videos weren’t excluded from Restricted Mode because of politics or ideology, as we demonstrated in our filings,” a YouTube spokesperson said in a statement. “PragerU’s allegations were meritless, both factually and legally, and the court’s ruling vindicates important legal principles that allow us to provide different choices and settings to users.

The answer to the current gatekeeper problem may not be in the courts. It is in developing alternatives, though that is much easier said than done.

I wonder if a goal of the lawsuit was to reach the discovery process and find out if YouTube actually was a state actor.

How could it be? Secret orders from the FBI?!

Might be as simple as an informal agreement between YouTube and some regulatory agency. Perhaps similar to how Operation Choke Point was done only more under the radar.

If “The Court” has rejected this case upon these grounds, I am unable to understand how it can define (and punish) “hate speech.”