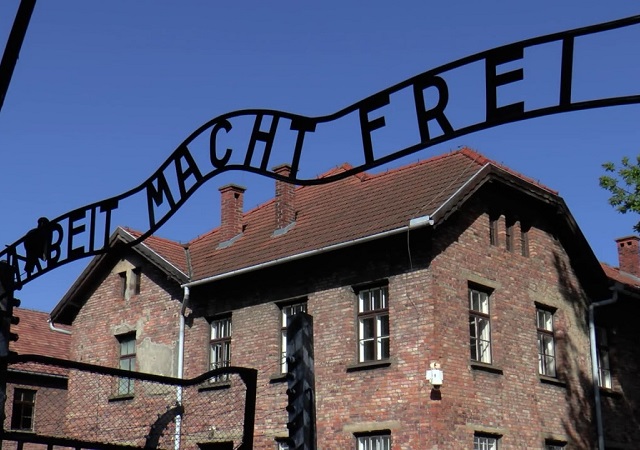 A Polish group is suing an Argentine newspaper for violating a new law that makes it a criminal offence to suggest Poland was complicit in the Holocaust. Warsaw-based Polish League Against Defamation (RDI) filed a case against the newspaper Página 12 shortly after the law came into effect on Thursday.

Last December, the newspaper published an article on the Jedwabne pogrom of 1941 in which the invading Nazi soldiers and Polish civilians carried out a massacre that killed at least 340 Jews.  The article was accompanied by an illustration of so-called Polish ‘doomed soldiers,’ seen by many Poles as national heroes who fought against the Soviet occupation. These fighters were, however, also involved in atrocities against the Jews and other minorities.

Polish League Against Defamation (RDI) regards the linking of ‘doomed soldiers’ to these historic genocidal crimes as “an action intended to harm the Polish nation and the good reputation of Polish soldiers.”

According to the Polish government, the aim of the law is to prevent people from describing Nazi death camps located in Poland, such as Auschwitz and Treblinka, as Polish. However, as the lawsuit shows, the legislation could be used to suppress public debate over the involvement of Polish nationals in the Holocaust orchestrated by the Nazi Germany. If the lawsuit succeeds, the law could be applied retroactively and beyond the borders of Poland.

German newspaper Die Welt reported the details of the lawsuit on Saturday:

Just a day after its inception the controversial Polish Holocaust law has become the basis of a lawsuit: the conservative Polish League Against Defamation (RDI) filed a legal complaint against the Argentinian news website Página 12 for “harming the Polish nation” through its reporting.

The group is substantiating the claim on the law that was enacted on Thursday. Penalties and prison sentence of up to three years can be handed out if complicity in Nazi crimes are attributed to the “Polish nation or the Polish state.”

The Polish League’s lawsuit refers to an article published by Página 12 on the massacre of Jews in the town of Jedwabne in 1941. Polish citizens were involved in it. Página 12 illustrated the article with a  photo of anti-Communist resistance fighters from the post-war period. The League took an exception to that. [Translation by the author]

Earlier this week, Israeli Education Minister, Naftali Bennett, agreed with the “historic fact that Germans initiated, planned and built the work and death camps in Poland.” He, however, questioned the wider implications of the Polish law.

“It is a historic fact that many Poles aided in the murder of Jews, handed them in, abused them, and even killed Jews during and after the Holocaust,” Bennett told reporters.

As the debate leading up to this legislation shows, the issue is bigger than merely the nomenclature of the Nazi death camps situated in Poland. Political and media debate over the issue in Poland has been mired in vicious antisemitic rhetoric.

The social media campaigns, initiated to highlight German authorship of the death camps and Polish innocence, often turned antisemitic. “In the last few days we could not help but notice a wave of antisemitic statements, reaching the embassy through all channels of communication,” Israeli embassy in Warsaw said in the run up to the passing of the legislation.

At the last month’s Munich Security Conference, Polish Prime Minister Mateusz Morawiecki suggested that Jews were partially responsible for the genocide committed against them during the Holocaust.

While the Polish Prime Minister goes around blaming the Jews for their own genocide, the legislation backed by him is being used to criminalize any discussion over Polish involvement.

People and the state of Poland have every right to emphasize the Nazi authorship of the Holocaust carried out on Polish soil. However, as the application of the new Holocaust Law shows, the legislation will be used to muzzle critical investigation into the complicity of Polish population under the Nazi occupation.

Let’s rewrite history again. No of course we weren’t bad. It is always the others and they are very very bad, not just bad. There were people of all ages, colors, sexes, religions, nationalities, political stripes that were complicit. There was no particular group that wasn’t complicit is some kind of horror, whether it was the fire bombing of Dresden or Hamburg or Tokyo, or the bombing of London or the concentration camps of Europe, or the extra-judcial punishments of the others. And let’s not forget that even some jews were complicit too in the horrors of the camps. Doesn’t make for fun reading or remembering, but do we really want to rewrite history? And sue?