Why was Rand Paul the only Senator fighting a budget deal that includes $1T in spending?

Why was Rand Paul the only Senator fighting a budget deal that includes $1T in spending?

“It’s worth a debate whether we should borrow a million dollars a minute.” 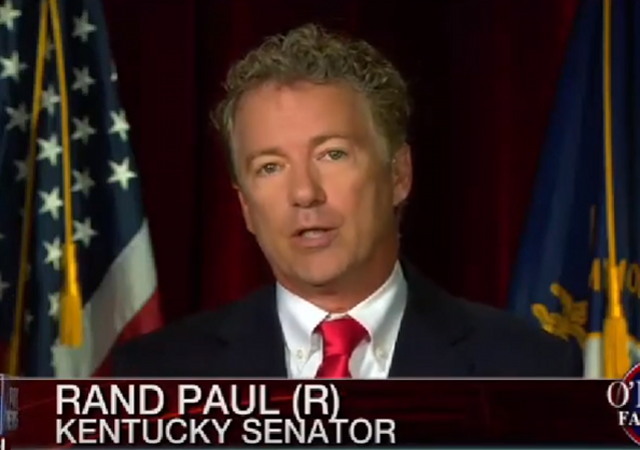 On Thursday, Sen. Rand Paul succeeded in blocking a vote on the so-called Budget Deal (which we discussed thusly Wednesday). In so doing, the federal government shut down at 12:01 AM.

An hour and a half later, the Senate invoked cloture, voted on the huge spending deal reached by both parties Wednesday evening, passing the bill with a vote of 71-28 (without bothering to debate it). Just before dawn it passed the House and heads to Trump for signature.

Because of the egregious amount of money the bill spends, Paul objected to the deal. The deal includes $1 trillion in spending, raising federal government spending caps for the next two years.

Paul refused to acquiesce and allow the voting on the budget deal without a vote on his amendment which would cap and cut spending.

The usual suspects are annoyed.

The dispute will provoke a brief shutdown as midnight draws near, and Paul’s colleagues ganged up on him as they grew increasingly frustrated with a member of their own party. Senate Majority Whip John Cornyn (R-Texas) blamed Paul directly for “wasting everybody’s time.”

And Cornyn, McConnell, Graham and Sen. Thom Tillis (R-N.C.) tried repeatedly to set up a vote before the shutdown deadline. Each time, Paul objected, much to Tillis’ frustration.

“Do you want to be a senator that wants to make a point or you want to make a difference? You know what? I don’t see how points alone can make a change in America,” Tillis fumed on the Senate floor. “You can make a point all you want. But points are forgotten. There’s not a whole of history books about the great points of the American Senate.”

Paul rightly pointed out Republican hypocrisy on federal spending, noting that the same people voting to raise the debt ceiling for the next two years lambasted President Obama for wanting to do the same.

I’m so old, I remember Republicans touting cut, cap, and balance back in 2011, even if they don’t.

Which begs the question, why is Paul alone in calling attention to our runaway federal deficit?

Mike Lee stood with Paul, but only to criticize the binary choices parliamentary procedure creates:

After Paul withstood a barrage of criticism from his colleagues, the like-minded Sen. Mike Lee (R-Utah) came to the floor to defend him. He said individual senators are “left out of the process” and left with a binary choice of voting yes or no, with no alterations to legislation.

The legislation, all 700 pages of it were introduced at midnight Wednesday, leaving less than 48 hours to sort through the spending monstrosity. This is the exact same kind of governance Republicans complained about for 8 years: introduced hundreds of pages of legislation in the dead of night, leave little to no time to review said legislation, insist the legislation must be passed or else! Republicans might not be trotting out children, but they’re shamelessly using the military as a political prop in this battle.

Sen. Rand Paul: “I hope those who look at this bill, who actually truly do believe that debt is a problem, will consider saying ‘Enough is enough,’ and ‘I’m not voting for more debt.'” pic.twitter.com/wT4YQIVpJC

Without fail, conservative governance at the federal level dies a publicly humiliating death when Republicans are in power.

The war of government is not, nor has it been in my lifetime, a war between dueling parties. It’s a constant, exhausting, and losing battle between the taxpayer and a finagling, self-interested, leach of a government. Unless there’s a clear adversary who can be used as a tool to obtain some political capital, principles fall by the wayside, if they ever truly existed.

When both parties are happy, they’re usually looting the Treasury. And that’s what this bill does.

Barely more than a year in control of both houses and the oval office and Republicans have already sold old to big-spending and perpetual government glut. Disappointing is far from sufficient. Disgusting is more accurate.

Because he is the only senator running for president…………at the moment.