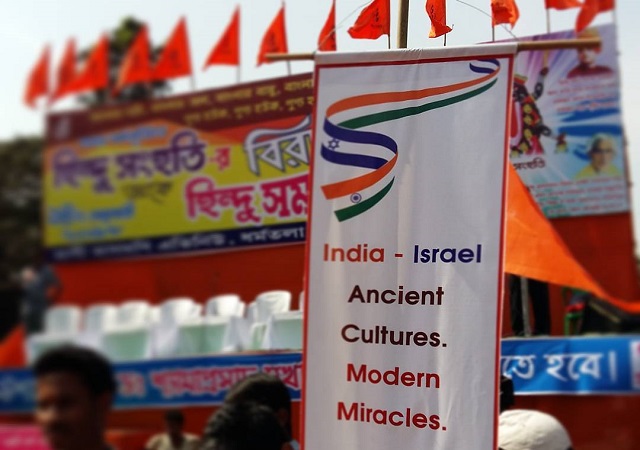 Of all the topics I cover for Legal Insurrection, stories related to India-Israel relations are closest to my heart. It was, therefore, a pleasant surprise when I was invited to address a large pro-Israel rally in the Indian city of Calcutta. The invitation for the last week’s event was extended by Hindu Samhati, a prominent Hindu organisation active in eastern India.

The group was formed ten years ago in response to decade-long pogroms and Islamist terror targeting Hindus in the Indian state of West Bengal and the neighboring Muslim-majority Bangladesh. Today, thousands of Hindu Samhati activists and community organizers are working in Hindu and Buddhists communities across eastern India. In 2014, at the height of Gaza conflict, Hindu Samhati organized a massive rally in the support of Israel’s right to defend itself against terrorist aggression from Islamist outfit Hamas.

This year’s rally was organized to highlight the popular support in the country for the recognition of Jerusalem as the capital of Israel and relocating the Indian embassy to the Holy City. Despite receiving the invitation just weeks ahead of the event, I simply couldn’t turn it down. I had launched an online petition gathering support among Indian diaspora on the issue of Jerusalem. Now was my chance to drive home the point—literally.

On February 14, I addressed a gathering of 70,000 people in the heart of Calcutta, standing beside the legendary Indian military hero Major General Gagandeep Bakshi and Hindu Samhati’s founder Tapan Ghosh. We were joined on the stage by prominent community leaders along with Hindu priests and Buddhist monks.

Holding pro-Israel banners aloft, some 70,000 people assembled in the center of Calcutta. (…) The rally, which organizers are claiming is the “largest pro-Israel rally in history,” eclipses a similar demonstration held in 2014, which saw a reported crowd of 20,000.

“Moving our embassy to Jerusalem will honor Israel’s long-standing commitment to peace, and strengthen the bond between our two ancient peoples,” Hindu Samhati chief Tapan Ghosh told the demonstrators.

In my short speech I urged prime minister Narendra Modi to consider the sentiments of India’s Hindu majority and establish the embassy in the city of Jerusalem. I also talked about the lessons of Zionism and their contemporary relevance to the Hindu-majority country, an example worth emulating as Indian’s rejuvenate their classical languages and ancient culture, innovate for a prosperous future, and strive to eliminate discriminatory caste system.

Coming from Germany, (currently in the grip of resurging antisemitism) it was refreshing to see tens and thousands of demonstrators holding pro-Israel banners as they marched through the city center.

It was heartwarming to interact with friends and well-wishers of Israel and Jewish people from all walks of life, from prominent politicians in the Indian capital to peasants from rural India. Especially impressive was the active participation of women and girls at the pro-Israel event in Calcutta.

With prime minister Benjamin Netanyahu’s historic visit to India and a massive pro-Israel rally in Calcutta, 2018 promises to be a great year for India-Israel relations. My grassroots activism with Indian4Israel—an advocacy group fostering ties between Indian diaspora and the Jewish people—promises to intensify as well. After Calcutta, I plan to visit communities across Israel to convey the message of solidarity and support to Israelis facing relentless waves of Islamist terrorism.

The Indians are having their own muslim problems so I expect they have a much better appreciation for what Israel is going through.

1
notamemberofanyorganizedpolicital in reply to rabidfox. | February 23, 2018 at 5:08 pm

The “Raj” should never have been split up when given up by Britain imo……….

India, and Modi….thank you for endorsing and supporting Israel…doing the job that American Jews won’t do.

Thank you, President Trump, for moving the embassy with alacrity and determination.

More and more americans, and in particular, democrats support the jhadists. American Jews value liberalism more than their own survival. It’s just sad.