Knock-off of American drone brought down in Iran in December 2011, which Obama refused to destroy on the ground before the Iranians got to it. 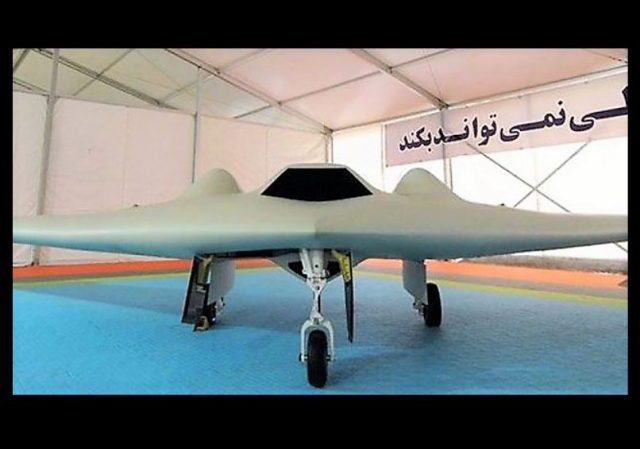 More details are emerging about the Iranian drone launched from central Syria that was brought down over Israeli territory, and the resulting Israeli attack on the Iranian base near Palmyra that launched and controlled the drone.

In that attack on the Iranian base, an Israeli F-16 was brought down, though the precise circumstances are not yet clear based on public information. Differing news accounts have the F-16 hit by shrapnel, or alternatively being ditched when the pilots realize a Russian-made surface-to-air missile (SAM) had locked on to the plane.

In retaliation for the downing of the plane, Israel launched a widespread attack reportedly destroying half of all Syria’s air defense systems. Once again, details are hard to come by and the Syrians/Iranians have been curiously quiet about it. Haaretz reports on the theory as to how the plane was brought down:

Syria was able to down the Israeli plane because it was flying too high. That, at least, is the initial assessment based on an Israel Air Force investigation of the incident.

The F-16 was one of eight of the same model that took part in an attack on an Iranian command trailer at the T4 base near the city of Palmyra, deep inside Syria. It was from that trailer that members of the Quds Force of Iran’s Revolutionary Guards launched the drone that penetrated Israeli airspace on Saturday, and which was intercepted over the Beit She’an Valley. Israeli army sources said Israel had tracked the aircraft in the course of its entire flight from the Palmyra area, through northern Jordan until it crossed into Israel.

From the initial investigation it appears that at least one of the Israeli jets remained at high altitude, apparently to verify that the missiles that were fired at the Iranian trailer actually hit it. At that point, Syria’s aerial defense system fired an unusually large number of missiles, more than 20, of at least two types – long-range SA-5s and shorter-range SA-17s. The volley of missiles was clearly visible to Israelis in the north and even in the center of the country.

The lead Israeli plane managed to spot the missiles and dive to evade them. The crew that was hit did not do that – and when the Syrian missile was close to their plane, the pilot and navigator abandoned it, using their ejection seat….

Israel Air Force sources believe that a warning regarding the antiaircraft fire also reached the crew that abandoned their aircraft, but for a reason that is still not clear, the crew did not manage to take complete evasive action. It’s possible that the crew was too focused on its aerial bombardment and therefore reacted in a way that made the plane vulnerable to being hit.

The pilots reportedly say the plane was hit.

An Israeli General was quoted at Ynet News as follows:

The head of IAF Air Division, Brig. Gen. Amnon Ein Dar said Sunday the IDF has carried out thousands of missions in Syria in the last year alone.

Speaking from the Tel Nof Airbase, Ein Dar also noted the IAF was learning from Saturday’s events, which began with the interception of an Iranian drone in Israeli territory followed by an IAF attack in Syria and the subsequent shooting down of an Israel F-16 plane.

Ein Dar said the IAF jets struck deep inside Syrian territory. During their mission, a large number of anti-aircraft missiles were directed at them and one hit its target, or near the target, forcing the pilots to bail….

“In this instance, our aircraft was hit; we are of course unsatisfied and we will study the incident and learn for the future,” he told Ynet in an interview.

In his view, the strike against Syrian air defenses was a very significant event: “There has not been such a strike since 1982; it was very broad and it will have an effect on their decision-making process. I assume that they will continue to attempt to defend themselves, but they were hit very seriously and the indications of that are only beginning to come to light this morning, despite their attempts to conceal it.”

One of the questions has been whether this was an Iranian ambush, in which the Israeli attack deliberately was provoked for a waiting barrage of 25 or more SAM missiles fired at different altitudes. The Israeli General doesn’t think so, noting the Iranians might have thought the drone could pass over Israel undetected because it was a knock-off of an American stealth drone.

The IDF’s working assumption, Ein Dar explained, is that this was not a planned Iranian ambush intended to drag Israel into an operational blunder. Rather, the belief is that the Iranians assumed that they could succeed in sending the drone without the IDF defenses noticing and they were mistaken….

According to Ein Dar, “The drone was of top quality technology, it was a copy of an American drone that fell into their hands.” He added: “The Iranians are operating in Syria and we therefore hit them in addition to intercepting the drone; and we will continue to do so wherever we find them.”

And, indeed, based on photos of the downed drone, it seems to have been an imitation of an American stealth drone that was felled over Iran in 2011. Aviationist Magazine noted that the drone is based on the American RQ-170 model, which is manufactured by Lockheed Martin and was nicknamed the Beast of Kandahar for its intelligence gathering over the Afghan city.

The reference to American technology falling into Iranian hands refers to December 2011, when an American stealth drone operating from Afghanistan crashed in Iran. Rather than bomb the downed drone so the Iranians couldn’t get the cutting edge design and technology, the Obama administration did nothing.

We covered the story at the time, Iran displays downed drone (quote via BBC):

Iranian TV has shown the first video footage of an advanced US drone aircraft that Tehran says it downed near the
Afghan border.

US officials have acknowledged the loss of the unmanned plane, saying it had malfunctioned.

However, Iranian officials say its forces electronically hijacked the drone and steered it to the ground.

Obama rejected plans to launch a covert operation to take back or at least destroy the drone and all its sensitive military technologies for fear it would spark a larger confrontation.

Multiple additional reports cite the Iranian drone as being a knock-off:

Footage of the Iranian UAV that was shot down in Israeli airspace Saturxday shows it heavily resembles a US stealth drone that was downed in Iran in 2011.

After being captured in Iran, the United States asked for it back, but was refused.

US magazine The Aviationist reported the drone was a model the Revolutionary Guards presented two years ago, built on the basis of the Lockheed Martin RQ-170 Sentinel aerial reconnaissance UAV.

The model is called the “Beast of Kandahar” due to its activities in Afghanistan. 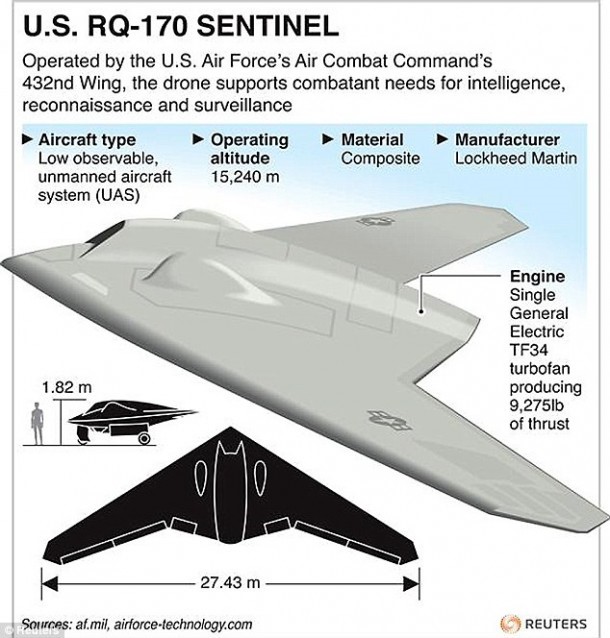 NBC News has confirmed that the Iranian drone was based on the American drone captured in 2011:

. @NBCNews confirms the Iranian drone the Israeli air force shot down yesterday was a copy of the American UAV captured by the Iranians in 2011

An Iranian engineer claimed the guidance software was hacked:

Iran guided the CIA’s “lost” stealth drone to an intact landing inside hostile territory by exploiting a navigational weakness long-known to the US military, according to an Iranian engineer now working on the captured drone’s systems inside Iran.

Iranian electronic warfare specialists were able to cut off communications links of the American bat-wing RQ-170 Sentinel, says the engineer, who works for one of many Iranian military and civilian teams currently trying to unravel the drone’s stealth and intelligence secrets, and who could not be named for his safety.

Using knowledge gleaned from previous downed American drones and a technique proudly claimed by Iranian commanders in September, the Iranian specialists then reconfigured the drone’s GPS coordinates to make it land in Iran at what the drone thought was its actual home base in Afghanistan.

Despite Iranian claims, it remains a mystery how the Iranians brought down the American stealth drone, if indeed it wasn’t just an accident, Who Tracked, Hacked-N-Jacked, the Beast of Kandahar?.

What is not a mystery is that Obama had a chance to destroy this technology on the ground after it was brought down in Iran. Instead, he let the Iranians have it, and now it’s being used against Israel, and sooner or later, will be used against American troops.

One first imagines that this is just part of the way the world of war industry works, but then one reflects a little more after reading the Israeli press on the same matter. It is much deaper than just the war business. One see just how deeply the antisemite feelings have pervaded the highest echelons. Even Obama is now a proven one, and the suspicion must hang over Michelle as well. One can barely ask who next? Is it all of them?

The same folks who criticise Israel and who build conspiracy theories based upon the Liberty Incident decline to criticise Iran, laud the smiling sister of the North Korean leader, ignore Turkey’s actions vs the Kurds, don’t care about the plight of Coptic Christians in Egypt, ignore the genocide vs Christians in the Near and Middle East, etc., etc. What actuates the “concerns” of such persons regarding Israel is not very hard to determine.