DNC is Going Broke as RNC Rakes in Cash

DNC is Going Broke as RNC Rakes in Cash

“This report is nothing short of a disaster” 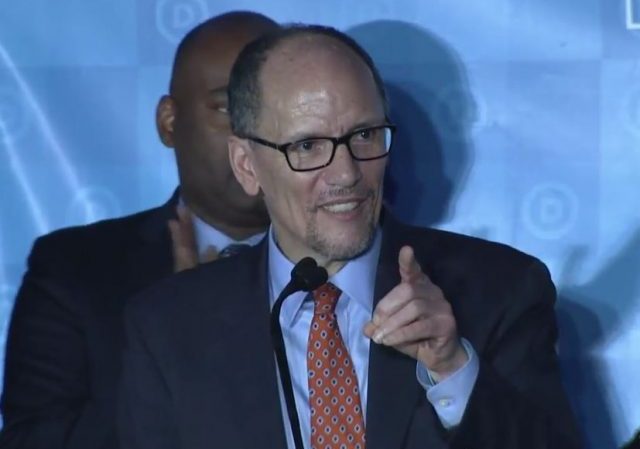 Tom Perez and Keith Ellison run the DNC, and one of their jobs is to raise money. Any way you look at it, they are failing their party in this task. The DNC had a miserable year for fundraising in 2017.

Michael Ahrens is the GOP’s Rapid Response Director. Last night, he tweeted this:

The DNC tried to bury their latest FEC #s tonight…

Those numbers are a nightmare for Democrats.

Ed Morrissey of Hot Air puts it in perspective:

The DNC should, under almost any other leadership, be raising money hand over fist. They have a hostile president who almost delights in polarization, a progressive wing that fancies itself a “resistance,” and billionaires who want to keep fighting the last election. Democratic congressional committees have remained competitive in fundraising, although Republicans have shown a considerable improvement in their efforts even with a relatively unpopular president as the public face of the party.

This report is nothing short of a disaster. Having $6.1 million in debt with only $6.3 million cash on hand is basically being broke. Debt means interest payments, after all, which will eventually overtake the COH position — and probably sooner rather than later. The DNC has to be able to spend to set up its fundraising, and right now that’s looking iffy.

More to the point, the DNC has to organize and fund a GOTV effort this fall if they want to score big in the midterms. Some have suggested that the dollars are going instead to the candidates directly, although there’s no real data to support that as of yet.

Inversely, the Republican National Committee had a banner year for fundraising. Charles Russell reports at the Washington Free Beacon:

The Republican National Committee announced Wednesday that it raised a total of $132.5 million in 2017, setting a record for an off-election year.

“Our strong fundraising numbers reflect voters’ optimism and continued support as President Trump fulfills his promises to the American people,” RNC chairwoman Ronna McDaniel said in a statement. “In his first year, President Trump delivered a historic tax cut to the middle-class, slashed regulations, and grew our economy. We look forward to electing more Republican leaders to Congress who will support President Trump’s winning agenda on behalf of the American people.”

The RNC raised $11.1 million in December, ending the year with no debt and $38.8 million cash on hand as the national party prepares for the 2018 midterm elections.

Liberals in media keep talking about a supposed “blue wave” that’s coming in this year’s midterm elections. How are they planning to fund it?

People full of envy, hate and a sense of entitlement don’t make for a healthy or successful political party.

Perez has all the social graces of a rabid weasel. Does not play well in the Democratic paymasters in the Board Rooms of the investment bankers and hedge funds that traditional prop up the Democratic Party.