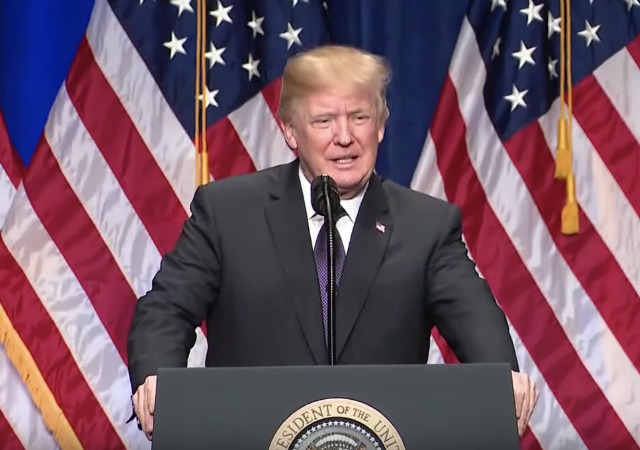 Oh how the tides have turned. Democrats have thought latching onto celebrities would keep their brand afloat, but that has slowly died down with Trump’s victory being the climax. Well, so we thought. Democrats and celebrities have a tough time accepting reality…you know, like how us regular Americans don’t give a damn about what they think.

Trump delivered them ANOTHER blow with his State of the Union last month while ANOTHER awards show dipped in ratings because we are sick and tired of being lectured by over paid snobs.

State Of The Union

Kemberlee blogged the day after the SOTU about the polls, which showed that the speech was a home run.

Eight in 10 Americans who watched tonight felt that the president was trying to unite the country, rather than divide it, according to CBS News poll https://t.co/OZsw2drXbJ pic.twitter.com/6fEeSPMkdW

Even the Independents liked it!

But the celebrities that suffer from Trump Derangement Syndrome could not relent. I swear they didn’t hear a single word of what he said or even watched. Piers Morgan at The Daily Mail wrote:

Less than a quarter that watched said it made them feel scared or angry.

Contrast this reaction with the instant and so tediously predictable blind rage spewed by the world’s liberal celebrities on social media before, during and after the address.

From my own unofficial poll – i.e. my own eyes on Twitter – I’d say 99% of them were so furious at the speech they could barely think straight.

‘I was told darkness could not exist in the light,’ tweeted Sarah Silverman. ‘But here it is, for everyone to not see.’

Jim Carrey tweeted an illustration of sharks across a map of America, then another of a weeping Abraham Lincoln and the caption: ‘It’s my party and I’ll cry if I want to.’

Here’s my fun tweet about the #SOTU: the President is a lying, incompetent, racist, misogynistic sack of shit. Please register to VOTE in the Midterms on Nov 6th: https://t.co/hgzVrS1E2z

Yesterday I blogged about how those elites in the DC bubble still cannot believe that Trump’s approval ratings continue to climb after the SOTU and implementation of the tax reform plan. I found this response today:

Just scream a little more about Russia & Putin and I’m sure this will be fixed, because what most Americans worry about as soon as they wake up isn’t their wages or jobs but the Kremlin. DC elites somehow find a way to separate themselves even more from ordinary Americans https://t.co/UCX25EgJlB

Exactly. My parents are into politics, but their finances are their main concern. I’ve tried to bring up Russia in regular conversations with family members and friends and the topic lasts maybe a minute. Then it goes back to our economy or our daily life in general.

They say all this crap after us ordinary citizens refuse to watch another awards show as they self-congratulate themselves. The Grammy Awards, which aired the Sunday before the SOTU, lost 24% of its viewers and set a nine-year low record. From The New York Times:

Awards shows have also gotten increasingly political, with celebrity presenters and winners playing the role of firebrands at town-hall meetings. The Grammys, which are broadcast on CBS, were no different on Sunday, with several performers bringing up immigration and the #MeToo movement. U2 performed on a barge just outside the Statue of Liberty, a performance not exactly subtle in its symbolism, and Hillary Clinton showed up in a taped segment, reading about President Trump’s preference for McDonald’s food from Michael Wolff’s best-seller, “Fire and Fury: Inside the Trump White House.”

Nikki R. Haley, the United States ambassador to the United Nations, gave voice to proponents of the “shut up and sing” side of the debate. “I have always loved the Grammys but to have artists read the Fire and Fury book killed it,” Ms. Haley wrote in a tweet during the event. “Don’t ruin great music with trash. Some of us love music without the politics thrown in it.”

Sorry, I need to laugh again. Yes, these leftists are still parading out FAILED Democrat presidential candidate, who enjoyed all of the celebrity endorsements during the campaign and STILL LOST BIGLY to Trump. Morgan continued:

One thing’s for sure: it won’t be Hillary Clinton, who apparently still hasn’t got the message either that she lost or that hanging out with liberal celebrities is a vote-crusher to middle America.

I don’t know what possessed her to pop up in the middle of the Grammys to read out Trump-mocking lines from Michael Wolff’s book, but all it did was remind everyone yet again that she’s a sore loser, and that the Democrats haven’t found anyone else to replace her yet.

Until they do, Trump will continue to surge in confidence and if the economy does the same then I predict he will be re-elected at the next election by a bigger majority.

But no! She’s still relevant…only to read from the book by the misogynist Michael Wolff, who implied Haley is having an affair with Trump and has taken every opportunity to bash her. Even Mika on Morning Joe has had enough of his behavior and kicked him off the set.

The decline in awards shows has been happening over the years, especially in Obama’s administration. The 2017 Oscars took a YUGE hit, especially with the younger crowd. From The Hollywood Reporter:

After initial indicators had Sunday’s lengthy show off from 2016, time-zone adjusted tallies give this year’s Oscars an average 32.9 million viewers. That marks a 4 percent drop in viewership from the prior. Early stats had the show averaging an overnight 22.4 rating among metered market households. (Last year’s outing saw its overnight score, a 23.4 rating, ultimately translate to 34.4 million viewers.) In the key demo of adults 18-49, this year’s show averaged a 9.1 rating — off a more dramatic 14 percent from the 2016 telecast, which averaged a 10.5 rating among the advertiser-favored viewers.

The stuffy crowd will insist it’s because the telecast went almost four hours, but stats show that viewership remained steady through the broadcast. I can think of a few things that may have turned people off that happened before the Oscars, which THR noted:

A great deal of Oscar attention this year focused on how the telecast would handle the current political climate. The Golden Globes, after all, culminated in a rousing speech against President (and Apprentice executive producer) Donald Trump by lifetime achievement award winner Meryl Streep. And the SAG Awards, albeit a much smaller TV platform, were dominated by winners speaking out against the Trump administration’s travel ban targeting Muslims. Kimmel got in the obligatory jabs at Trump, but they weren’t as central to the tone of the telecast as many might have thought.

Exactly. WE ARE SICK OF BEING LECTURED BY PEOPLE WHO HAVE NO IDEA HOW IT IS TO LIVE LIKE US.

My former boss, the late and great Andrew Breitbart, said politics are downstream from culture. He was 100% correct. Despite that I cannot watch these shows. A friend of mine tweeted this today:

I know people hate the “stick to sports” thing, but sports are supposed to be an escape from the nonsense that happens in the real world. So if it’s not going to be, don’t be mad or surprised when you lose a huge chunk of your audience.

Exactly. As a political reporter I need sports to escape the insanity. I don’t even like it when it dives into politics that I agree with. I want NO politics. None. https://t.co/5GY3jvVh1t

Morgan also noted that we haven’t seen any of these celebrities give props to the tax reform plan even though many of us rugrats have brought home more money and companies have decided to also use those savings to bring jobs back to America and develop factories here:

Certainly, it helped inspire Apple, one of America’s biggest overseas job outsourcing companies, to recently announce they’re bringing $350billion and 20,000 jobs back home to the US economy.

But have you seen a single liberal celebrity acknowledge that? No.

I didn’t like Obama, even when I was a socialist. But when he said or did anything well, I gave him props because I’m a mature adult. Granted, it wasn’t much, but when it happened I did it.

I thought Obama Derangement Syndrome was bad, but TDS is off the charts. I have major problems with the tax reform plan in the long run, but you cannot deny the great effects it’s having on the now.Democrats, especially Minority Leader Nancy Pelosi, have continued to bash the tax cuts even as more and more companies have passed on their savings to their employees and expand. Pelosi called these moves pathetic and crumbs. Great way to show you care for the working class, ma’am.

I ended up the other day watching the Election night coverage of ABC. I watched from 10PM to 1AM to all the analysis and realized that all the analysts missed why I ended up voting for Trump.
Simply, Hillary Clinton was a “F..ing Criminal”.
This past week we got to watch a repeat. “The Memo” showed that top people at the DOJ/FBI had violated FISA and it was met with “That’s it” from the former top cop at the FBI. Of course, most of the media joined in by ignoring this failure to follow the law … the same way they did with Hillary on Election night.

Yeah I care not a whit what some celebrity Communist twit has to say about anything.

Plato, Aristotle, Meryl Streep. Which of these is not like the others?