California Judge Rules Against Gay Couple, Says ‘Cake in Question is Not Yet Baked’

California Judge Rules Against Gay Couple, Says ‘Cake in Question is Not Yet Baked’

“The government must remain neutral in the marketplace of ideas.” 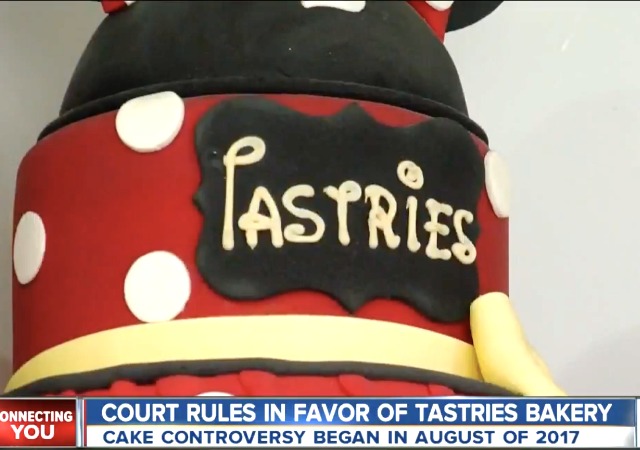 Get ready for the backlash. Judge David Lampe in Kern County, located in California, ruled against a same-sex couple after they sued Tastries Bakery owner Cathy Miller because she did not want to bake them a wedding cake.

Key distinction? Miller has not yet baked the cake.

Eileen and Mireya Rodriguez-Del Rio married in December 2016 and decided to have a ceremony with friends and family in October 2017. They planned for a wedding cake and after they tasted a few bakeries, decided to try out cakes at Miller’s Tastries.

An employee showed them display cakes and took down an order before she booked an official cake testing date. When that day came, Miller apologized to the couple and offered to send their order to a competitor who would bake and sell them a cake.

In October 2017, the couple “filed an administrative complaint with the State, alleging that Defendants violated the Unruh Act by denying them full and equal services on the basis of sexual orientation.”

Lampe also points out that the court would not force a baker who favors gay rights if he or she refused to bake a cake for a Catholic couple due to their religion’s stance on same sex marriage:

“This court has an obligation to protect Free Speech, regardless of whose foot the shoe is on,” wrote Lampe. “The court takes judicial notice, not of the content, but of the fact, that before the hearing on this matter there was a gathering in front of the courthouse where both sides of the debate voiced their views. Would this court order one side or the other to be quiet? Such an order would be the stuff of tyranny.”

Here’s the kicker: “The government must remain neutral in the marketplace of ideas.”

In his analysis, Lampe writes about to cases concerning the Unruh Act: 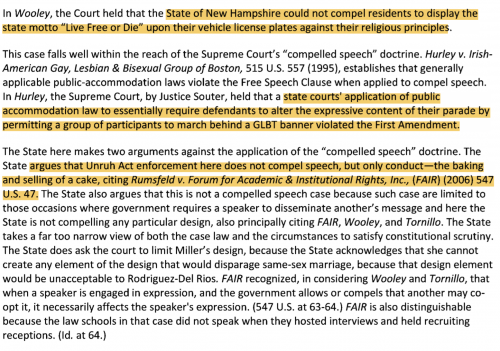 The Unruh Act is neutral on its face and does not per se constitute a direct restraint upon religion. In fact, by its terms, the Unruh Act itself protects religious discrimination in the marketplace. By its term it does not constitute an indirect restraint. There is also no evidence before the court that the State is targeting Christian bakers for the Unruh Act enforcement under these circumstances. Designing and creating a cake, even a wedding cake, may not in and of itself constitute a religious practice under the Free Exercise clause. It is the use that Miller’s design effort will be put to that causes her to object. Whether the application of the Unruh Act is these circumstances violates the Free Exercise clause is an open question, and the court does not address it because the case is sufficiently resolved upon Free Speech grounds.

Again, this case is about free speech:

Lampe also reminds the gay couple that Miller has already entered in an agreement with a competitor to take over same-sex marriage wedding cakes, WHICH IS WHAT SHE DID WHEN SHE REFUSED THIS COUPLE SERVICE.

CALIFORNIA DEPARTMENT OF FAIR EMPLOYMENT AND HOUSING VS CATHY’S CREATIONS, INC. by Legal Insurrection on Scribd

allahu akbar, infidels. so, in this california, can a brother go to a gay baker and command them to bake a cake memorializing the glorious event where isis brothers threw 4 gay heretics off a roof, as the Prophet Mohammed (peace be upon him) commanded?

uh, asking for a friend.

zig heil, untermenchen. can any of you recommend a gay bakery? i have a friend who needs a swastika cake.

Well done, Judge.
The voice of reason in a land of snowflakes.

It seems to be a brilliantly reasoned decision by the judge. It expresses legally what we feel in our hearts.