Why don’t we trust the media? Let me count the ways…. 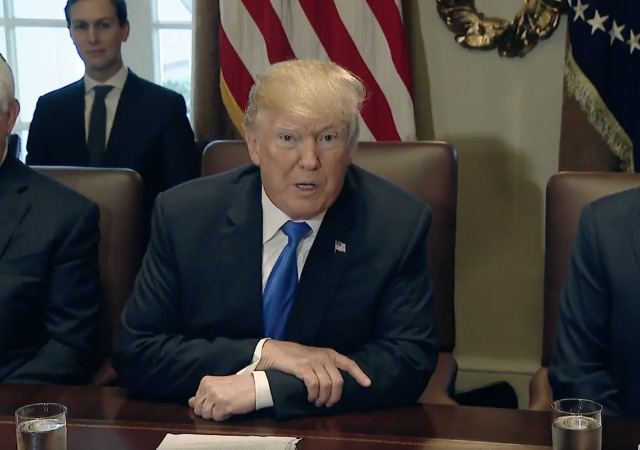 President Donald Trump’s administration has decided to end special protections given to some El Salvador immigrants who came to America in 2001 after devastating earthquakes.

Now, before you get all crazy, I’m seeing outlets bury this important detail: the protections will not end until September 2019. This will give those immigrants plenty of time to work on citizenship and stay in America. It will also give Congress time to work on immigration reform.

Look at these headlines from The New York Times and USA Today.

The sound you hear are my eyes rolling to the back of my head. Again, no, this order does not mean they MUST leave and leave today or else. And the mainstream media wonders why we don’t trust them.

Most headlines are not apocalyptic, but they still lead you to believe that the protections end RIGHT NOW. 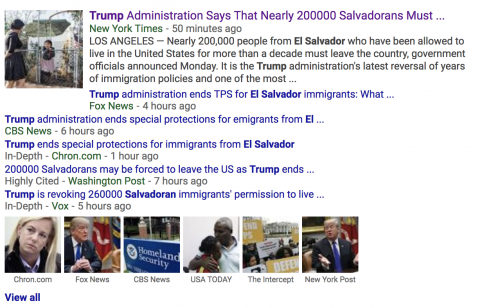 The 18-month transition period gives time for those affected to make arrangements to leave. Those who don’t may be in the U.S. illegally and subject to deportation.

The delay until 2019 also gives Congress time to offer them an alternate legal status, as some are hoping, though passing any immigration legislation is a heavy lift.

The fate of the Salvadorans may become intertwined in other negotiations about immigration policy. Extending their temporary protections along with a restoration of a legalization program for young, undocumented immigrants sometimes known as Dreamers could be offered in exchange for curbs to the diversity visa lottery program that President Donald Trump has heavily criticized, according to a congressional aide close to the negotiations. The visa-lottery program offers the chance for green cards to people from countries that are under represented in the immigration system.

They’ve been here since 2001, which gave them, in my opinion, plenty of time to at least start the process of becoming a citizen if they had anyintention of staying around.

Of course, groups have lambasted the administration because I guess America should just let anyone and everyone stay here as long as they want without becoming a citizen:

“The Trump Administration once again has reneged on a long-held American tradition and has added 200,000 Salvadoran families to their long list of undocumented immigrants it wishes to deport,” said Angelica Salas, executive director of the Coalition for Humane Immigrant Rights.

“Having been informed by Donald Trump on Saturday that he is a ‘stable genius,’ we all learned today that apparently the resident horses in that stable all wear blinders. There is no other explanation for Secretary of Homeland Security Kirstjen Nielsen’s decision to end Temporary Protected Status (TPS) for immigrants from El Salvador. To reach such a critical decision affecting the entire nation, threatening the economy and communities, and targeting over a quarter-million long-term immigrants and their families, by considering only the continuing effects of a 2001 earthquake, without any analysis of equally dangerous conditions unrelated to the natural disaster that make return not only disruptive but life-threateningly dangerous, reflects inexcusably narrow thinking. Willful ignorance or studied neglect of these conditions are inconsistent with executive authority under the TPS program and contrary to American values. In the face of this cultivated narrow-mindedness, the Congress, with smart leadership that lives away from the Trump stable and its resident genius, must act to provide the logical and humane protections that Salvadoran TPS holders deserve.”

democrat strategy has changed since the 90’s, when they were in favor of immigration controll and purported to be advocates of American workers.

now, they are purposefully trying to import socialist-leaning third-world voters to vote the votes that Americans won’t vote, and they use phony allegations of “racism” as a cudgel to stop debate on immigration enforcement.

it’s not hyperbole or exaggeration to point out that the democrat party has betrayed American citizens in favor of foreigners.

I suppose it looks better to give people time to pack up and leave, but does anyone expect anything at all to actually happen before the deadline?

The analogy with the houseguest who’s stayed far too long is that the host would demand to see continuing progress toward the goal. Whereas government, well government’s just not very good at such things, is it?

Perhaps a response to the inevitable October, 2019 demonstrations might be to remind all that if government really can’t manage a program of temporary refuge then perhaps there should never again be any such program.

They’ve been here long enough. They have to go back.