Hatch: “Nobody believes more in the CHIP program than I, I invented it – I was the one who wrote it” 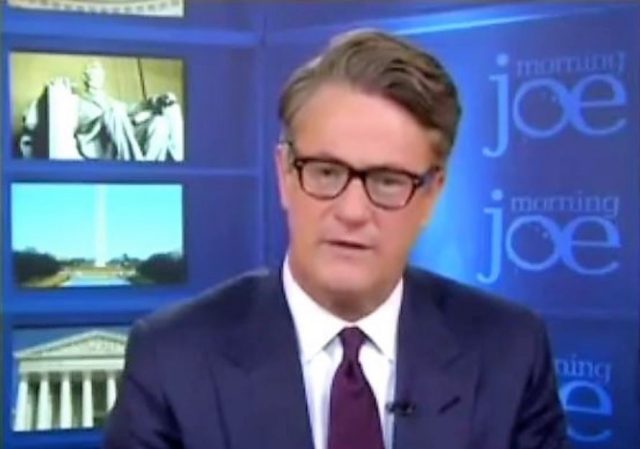 MSNBC’s Joe Scarborough cause a Twitter storm when he posted a misleading tweet about Senator Orrin Hatch (R-UT).  Scarborough misrepresented Hatch’s comments about entitlements generally as being specifically about CHIP, a program created back in 1997 when Hatch co-sponsored the legislation with then-Senator Ted Kennedy (D-MA).

Scarborough has since taken down the tweet, but here is a screen cap of it:

Newsweek has the fuller context:

During the tax debate on Thursday evening, Senator Orrin Hatch, from Utah, commented on the Children’s Health Insurance Program (CHIP), saying that it would be funded but that the lack of funds available was problematic for CHIP.

“Nobody believes more in the CHIP program than I, I invented it – I was the one who wrote it,” Hatch said on Thursday.

“[L]et me tell you something: we’re going to do CHIP. There’s no question about it in my mind. It’s got to be done the right way. But we, the reason CHIP’s having trouble is because we don’t have money anymore,” Hatch continued.

. . . . He added a liberal philosophy had created millions of people who “believe everything they are or ever hope to be depends on the federal government rather than the opportunity this great country grants them. I’ve got to say – I think it’s pretty hard to argue against these comments.”

. . . . He added that “more and more” federal programs had been created to help people – some of which were “lousy” and some, like CHIP, which were good and would be retained.

The Hatch quote making the rounds is not about CHIP, it’s about other spending on other benefits — watch for yourself https://t.co/o9eQXf5ntg

Watch Hatch’s statement in its entirety:

Hatch says quite clearly and several times that CHIP would not be affected and that it’s a good program.  His comments are clearly about entitlements in general and not specifically, as Scarborough stated, about “children’s health.”

The pushback was immediate, and so was the leftist outrage.

This has almost 10K RTs, many from reporters, and is completely false. Scarborough was hardly alone in lying about what Hatch said, but the lack of a link suggests that the dishonesty is intentional. All of these people owe Hatch an apology. https://t.co/8Rg6c08jMy

No. He was not talking about CHIP in that quote. He co-wrote bill to extend funding for it and, if you watch the whole clip, says he will see to it himself that CHIP funding is extended https://t.co/2KAbP3WV17

Joe could not be more dishonest here. Hatch literally said that he liked CHIP, that it's a good program, and that they're going to get it done.

That quote was in the middle talking about those who could help themselves but choose not to.

Shame on you, Joe – you know better. https://t.co/KHOrc51zCw

Hatch was talking about welfare spending in GENERAL.

Seconds before he said: “We’re going to do CHIP. There’s no question about it in my mind.”https://t.co/E5J1ukNRRe https://t.co/Bix6JXUkvU

The left, of course, gobbled up Scarborough’s misleading tweet and reacted as expected:

Children. 9,000,000 children. A bipartisan bill that has ALWAYS been funded. Preventive care, cancer care CHILDREN. bye bye CHIP. This is the #GOP https://t.co/aKIuS4sM89

This is like what it was like to live in the Robber Baron era. These people literally want to erase the progress of the 20th century. https://t.co/Ev1T9r2Exo

The irony here is you have to have a job to receive CHIP and Hatch just gave a huge amount of money to trust fund babies who DON’T WORK.

This isn’t about work.

This is straight-up class warfare. https://t.co/zVaGj6iWPi

Even Newsweek and Vox included the full context of Hatch’s statements (though neither called out Scarborough for his deceptiveness.  Eventually, all the pushback led Scarborough to delete the tweets (screencaps embedded above) and then issue a multi-tweet sorry, not sorry.

He then plays a cartoon version of a GOP senator by saying it's all those poor people getting welfare benefits that are bankrupting us, when anyone with basic knowledge of the federal debt knows this is a lie.

Except he doesn’t disagree because he took it down.

He then plays a cartoon version of a GOP senator by saying it's all those poor people getting welfare benefits that are bankrupting us, when anyone with basic knowledge of the federal debt knows this is a lie.

Then after saying children's health insurance is important but there's no money for it, Hatch says the Senate will eventually get to it. But later suggests it's not the be-all-end-all. His vote showed it's certainly not as important for tax breaks for the richest among us.

Hatch's comments were cold and calloused toward the truly disadvantaged on a night when he voted to give a windfall to the rich and steal $1 Trillion from future generations.

I'll take down my tweet if anyone thinks it is misleading. Looking at the full context of the speech, it accurately reflects his views: Republicans don't have money for CHIP because:
1/ we spend too much money on poor people, and,
2/ we must give tax cuts to the rich.

So what does any of this matter? It’s just yet another instance of leftist “throw grandma off a cliff” hysteria, after all. And that is the problem. Some of the responses to Scarborough’s multi-tweet diatribe are deeply disturbing.

KEEP THE TWEET UP. Joe, you're doing the honest work of the media that the country needs more than ever. You are a true patriot sir and an example of what non-partisanship should be. Stay woke brotha.

Your tweet is truthful. Very hard to understand that we are being ruled by HEARTLESS monsters. But we will NEVER ACCEPT IT.

One Twitter user points out that the premise of Scarborough’s misdirection is faulty and makes zero sense.

If you think that accurately reflects Republican views, you're not playing with a fair coin. The other side of the debate would not phrase things the way you did.

Joe, you were a Republican until this year. When did you stop wanting to "literally kill people" so you and your donors could get rich? #SeeWhyThisMatters

Democrat voters, however, don’t know this; they truly believe that Republicans want to “literally kill people” in the name of amassing wealth for themselves and their donors.

Scarborough is new to this game, having been a Republican until this year, but this leftist tendency to misdirect and even tell outright lies about Republican policy and motivation feeds the deep partisan division in our country, a division that might help both sides win elections but that makes it all-but-impossible for Congress to function.

The question becomes: If demonizing Republicans with falsehoods and overt deception of their base makes working with Republicans in Congress impossible, why do Democrat politicians even want to be in Congress at all? It’s obviously not to “work for the people,” as they claim because they’ve strategically made it impossible for them to do so once they are re/elected.

and the largest percentage of aborted babies by ethnic group is Blacks, so much for LibRule-ism.

The de facto effect (I don’t call it the main cause, but net effect) of putting abortion clinics in the urban centers is that the abortion of Hispanic and Black babies is more than double their percentage of the population
https://www.google.com/url?sa=t&rct=j&q=&esrc=s&source=web&cd=2&cad=rja&uact=8&ved=0ahUKEwjatuaPx-_XAhVJ8WMKHeP3Dd0QFggtMAE&url=http%3A%2F%2Fabort73.com%2Fabortion%2Fabortion_and_race&usg=AOvVaw0G8uIAI9nmVtIZ5rzvOMb6

When Twitter has idiots like Lala Reyes tweeting such hyperbolic and dishonest crap as she did, then it means nothing to me. Nor does anyone that believes it.

Republicans want to literally kill people in order to make themselves and their wealthy donors even wealthier.

As for Scarborough – have never watched his silly show and haven’t given a rat’s patoot what he has to say – ever.

He’s a proven liar over and over again. And then there’s the thing he shares a program and his life with. Ugh. Stupid and stupider. Thank goodness they are too old to spawn.

Makes me glad I don’t participate in “social media” like twitter and facebook, or watch MSNBC or CNN, etc. My blood pressure is better for it.

RE: “why do Democrat politicians even want to be in Congress at all?”

Then they should be expelled……

I think that these people are involved in far worse than bad boy behavior and that’s why they resign, get fired or decide not to run again so quick. I think information is escaping and they know they can’t stop it. Since before the election, they’ve been hinting at exposing the pedophile and sex trafficking that many celebrities and politicians have been involved in and that have been covered up for decades. I think the dam is about to break. I read this article today that lays it out nicely. I think this is just the beginning.