Rise of others may indicate that Kim Jong Un has decided to concentrate on the economy. 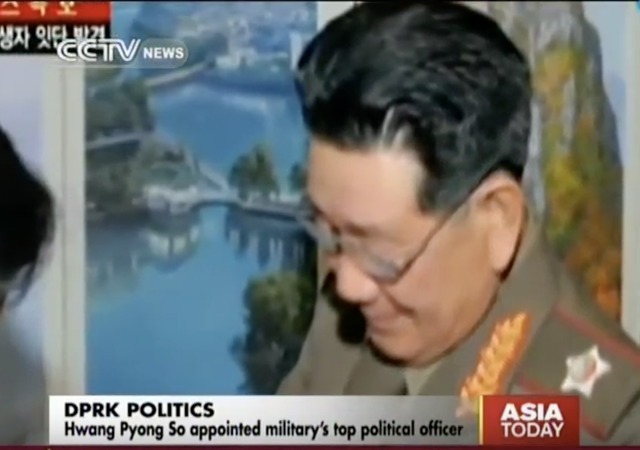 As we all know, it’s hard to receive information from North Korea, which leads experts to view photos that include dictator Kim Jong Un’s most inner circle.

That circle once included Vice Marshall Hwang Pyong So, once viewed as the hermit kingdom’s “second most powerful figure.” Reuters reported Hwang as missing in November, as South Korea’s National Intelligence Service said the dictator had him “‘punished’ for having an ‘impure’ attitude” about Kim.

“If Hwang was indeed kicked out of the Workers’ Party, it would practically mean the end of his political career, and possibly his life, though it is unknown whether or not he is still alive,” one South Korean paper reported.

Hwang was reportedly last seen in public on October 13. But there is some reason to believe that he may have only been reprimanded, and not killed, as the New York Times reports that the phrases “purge” and “execution” were not used in the intelligence report.

In a photo from September, Hwang and others sat with Kim at a table when the dictator ordered the country’s sixth nuclear test. Hawng had the privilege of sitting next to Kim, probably showing his influence on the dictator.

If Kim has punished Hwang, it’s the first time the vice marshall has received anything like it. Reuters said that “Hwang had a reputation of playing a respectful and careful role around” Kim as photos have shown him laughing with the dictator.

South Korean officials believe one of the men at that table, Workers’ Party Vice Chairman Choe Ryong Hae, may have ordered Hwang’s punishment. Some think the men had a power struggle that dates back a few years. Reuters brought up that the two men went to South Korea in 2014 during the Asian Games:

Dressed in a drab, olive army uniform and his large officer’s cap, Hwang, who had been promoted to the No.2 spot behind Kim just one week earlier, had tea and lunch with Choe and South Korean officials and waved to crowds at the games’ closing ceremony.

The trip had been announced just one day in advance and took many South Korean observers by surprise. Some suggested there may have been a power struggle between the two men, neither wanting to yield the high-profile visit to the other.

Choe, who was subjected to political “reeducation” himself in the past, now appears to be gaining more influence since he was promoted in October to the party’s powerful Central Military Commission, according to South Korean officials.

Kim has a history of pitting his people against each other as a way “to keep them in check and ensure their loyalty.”

Back in October, the government gave out its leadership roster and placed Hawng behind Choe and Premier Pak Pong-ju, the man in charge of the economy. From The New York Times:

The rise of Mr. Choe and Mr. Pak “reflects North Korea’s intention to focus on the economy and how to overcome international sanctions, now that it has succeeded in testing a hydrogen bomb,” Cheong Seong-chang, an analyst at the Sejong Institute, a South Korean think tank, wrote in a recent analysis. North Korea claimed to have detonated a thermonuclear device in a nuclear test on Sept. 3.

Maybe Hwang Made No Mistake?

Hwang may not have made a mistake, but his punishment could also be a way for Kim to avoid another major purge like the one in 2013, which took out his uncle Jong Song Thaek.

The New York Times in November reported that the information given out did not mention execution:

The General Political Bureau oversees the political life of North Korea’s 1.1-million-strong People’s Army, monitoring the loyalty of its officers. Vice Marshal Hwang has been widely considered the No. 2 man in Mr. Kim’s totalitarian regime.

The intelligence agency did not reveal how it obtained its information. But it did not use the phrases “purge” or “execution,” indicating that Vice Marshal Hwang was reprimanded but may still hold his job. He has not been seen in public since Oct. 13, according to the South Korean news media, which monitors the North’s state-run outlets.

So maybe now Kim has punished him just as a way to prevent Hwang “from becoming so powerful” that Kim would be forced to execute him.

The local Santa got in trouble for harassment .Some woman said he called her a Ho Ho Ho when she walked by.

All according to plan. This places the 3rd in command ( a known U.S. government agent)one step closer to control of the country.