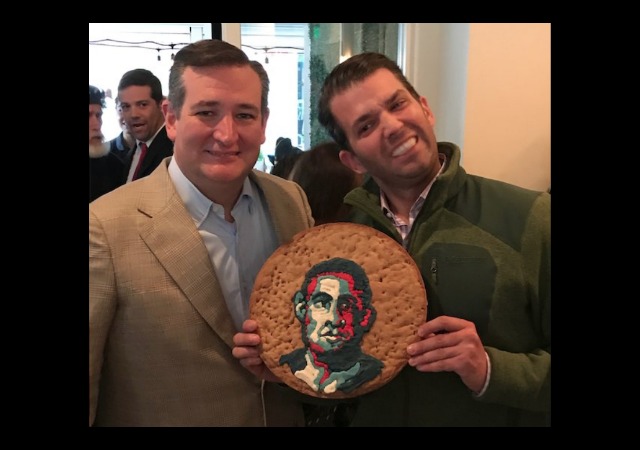 Because it’s funny, someone brought a cookie cake with the likeness of President Obama from his iconic “Hope” poster iced on the front. The two posed for a picture with the giant cookie, Don Jr. posted it to Instagram, and then the internet lost its mind, hurling Racist™ accusations and the like.

How in the hell is a cookie cake with an iconic picture of a former president Racist™? That’s a fabulous question and one none of the accusers have bothered to answer.

It's hard to have to acknowledge that racists are in the highest echelons of our government. This is completely… https://t.co/5MN6DV9eKd

Really GOP & Donald Trump Jr? That racist image of President Obama is just plain disgusting. Ted Cruz, you may think they like you, but they attacked your wife & said your father was involved in JFK murder. They will turn on you as well.
https://t.co/vo6Ju0FbGV

The Obama cookie Junior gave to Senator Cruz certainly demonstrates the low regard he has for non-white. Shameful. #ICYMI pic.twitter.com/wKVztt6Tuq

And then there’s a whole world of cookie truthers:

'That's a cookie, not a cake Trump Jr' https://t.co/xLbDumMtqw

Taking the ridiculousness to the next level, the owner of the restaurant where Don Jr.’s birthday shindig was held publicly apologized.

From the Houston Chronicle:

Restaurant owner Stephan Courseau took to Instagram the next day, writing that he felt “betrayed and sad” by the fact that guests used his restaurant, Le Bilboquet, “as a platform to promote, disrespect, and spread hatred.”

Racist cookies. What a ridiculous time to be alive.

I have a new theory: it is really racist to make a charge of racism where no racist intent exists.

Can’t be an image of Barak Obama… the nose isn’t turned up.