“getting the economic narrative right” 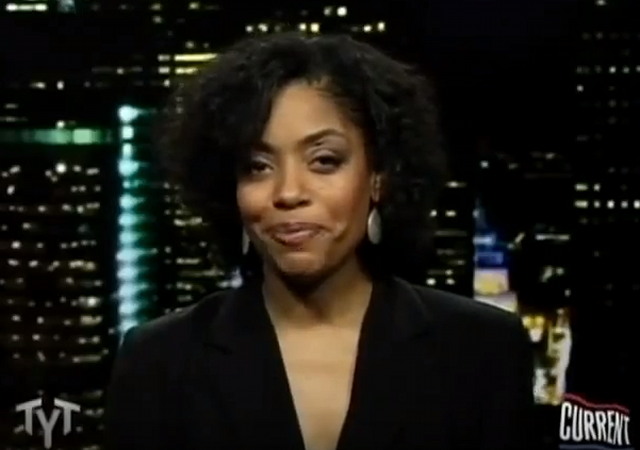 Janell Ross, a national reporter for the Washington Post, appeared at a secretive meeting of progressive Democrats earlier this month which included other guests such as George Soros. She attended the meeting without the knowledge of the Post and participated in a panel about economic messaging.

Brent Scher of the Washington Free Beacon broke the story:

Washington Post reporter Janell Ross gave a presentation at a secretive California gathering where Democratic politicians, liberal activists, and their biggest donors plotted the future of the progressive movement without notifying her superiors that she would be attending, according to a Post spokesman.

The Democracy Alliance went to great lengths to keep the identities of its members and guests confidential at its fall investment conference last week at the La Costa Resort, but the Washington Free Beacon obtained a detailed conference agenda that lists both events and featured guests.

Among them was Ross, a national reporter who closely covered the 2016 presidential campaign for the Washington Post and has since continued to cover the Trump administration.

Ross sat on a panel to assist conference-goers on the topic of “getting the economic narrative right” in future elections, according to the agenda, which can be viewed in full here.

Ross, whose panel was sandwiched by a talk with liberal billionaire George Soros and a message by Democratic senator Amy Klobuchar (Minn.) on Russian interference in the 2016 election, helped attendees explore questions such as: “What do progressives stand for?”

The Post has published no story on the Democracy Alliance get-together. Ross said she attended independently for a book project she’s working on. She’s listed in the Special Guests section of the program and her bio explains “Janell is currently writing a book about the real causes – official policy and social practice – of the yawning racial wealth gap for the [leftist Unitarian publisher] Beacon Press.”

Everyone knows the Washington Post leans left and there’s certainly nothing wrong with progressives planning strategy, but Ross wasn’t there as a reporter.

Jazz Shaw of Hot Air sums it up perfectly:

The Free Beacon has done some great reporting on this so their entire coverage is worth a read, but the obvious issue here is the problematic appearance of Ms. Ross on the conference agenda. Let’s be very clear about what this event was: it was a meeting of some of the highest rolling donors in the Democratic Party where their 2018 strategy to defeat the Republicans was being worked on. Nothing wrong with that, obviously. The GOP does the same thing all the time.

But a reporter for the Washington Post was there, not to cover the event for her paper (the Beacon confirmed that the WaPo wasn’t even aware she was there), but to participate as a panelist.

In short, you can be a political reporter for the Washington Post or you can be a progressive activist who helps Democrats win elections. You’re not supposed to be both.

Ross was simply doing what all employees do. She was presenting her expertise to her bosses on demand to enable the bosses to achieve their shared goals.

Another great reason for it to be labeled “the Washington Compost”

They are, collectively, the Chief Propagandists for National Socialism.