“Nobody cares about what Donna Brazile has said in a book” 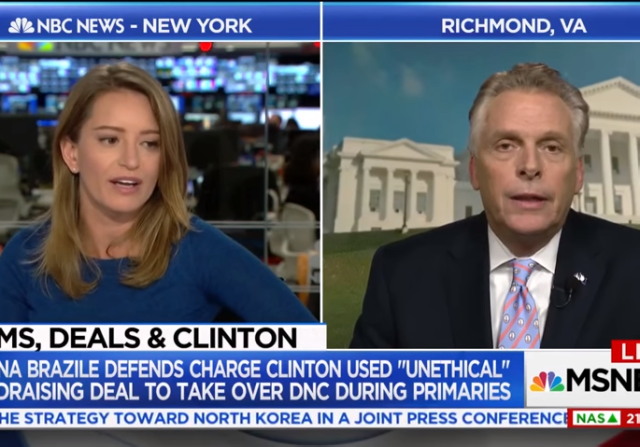 Some Democrats are very angry about the allegations in Donna Brazile’s new book. One of them is Virginia Governor Terry McAuliffe. He made his feelings well known yesterday on MSNBC.

Hillary Clinton has not yet commented about the claims of former interim DNC chair Donna Brazile, who is alleging in her new book that the 2016 Democratic primary was “rigged” in the former Secretary of State’s favor. But the comments of Gov. Terry McAuliffe (D-VA) might offer a hint about what Clinton-world thinks about Brazile’s set-to-be-released tome.

Appearing on MSNBC with Katy Tur, McAuliffe — himself a former DNC chair — didn’t mince words when asked about Brazile’s claims.

“Nobody cares about what Donna Brazile has said in a book,” McAuliffe said. “Nobody.”

The outgoing Virginia Governor was also extremely confident about the election to decide his successor, which is scheduled for Tuesday. Even though most observers see the race tightening, McAuliffe projected a great deal of confidence that Democratic candidate Ralph Northam will prevail over Republican challenger Ed Gillespie.

By Democrat standards, wasn’t that sort of sexist and racist of the governor?

Of course, what McAuliffe is really angry about is the realization that this situation could affect the Virginia governor’s race. Conor Beck reports at the Washington Free Beacon:

McAuliffe appeared on MSNBC’s “Meet the Press Daily” Friday to promote Democratic gubernatorial nominee Lt. Gov. Ralph Northam and his own work as governor of Virginia. But at the end of the interview, host Chuck Todd pivoted toward controversy at the DNC, which Brazile brought to light in an article Thursday.

“You’re a former DNC chair, I got to ask you—and you’re obviously very close friends to the Clintons. I know where you stand from the primary,” Todd said.

“The allegation Donna Brazile made that the DNC was basically in the tank in some form or another—and we can discuss how much—for Hillary Clinton throughout the primary season: fair charge?” Todd asked…

“I don’t know the specifics of the actual agreement,” McAuliffe said. “It’s regrettable that Donna (Brazile) thought this was the time that she should come out with this complaint. I mean, God love the Democratic Party. But we need—”

McAuliffe seems heavily invested in the outcome of this particular election. Perhaps he thinks a Democrat loss here would affect his ability to run for president in 2020.

@guyjones, he probably identifies as a black woman, so it’s okay. 😉

Look, two things are driving the Brazille narrative. Both of which benefit the current leadership of the DNC.

This is all is to blame the election of DJT on HRC by casting the DNC as victims dominated by the Clintons. A few of the former DNC officials, such as Wasserman-Shultz, are being quietly thrown under the bus as well.

It is designed to cement the current leadership of the DNC in place as well as expand the power of the “minority wing” of the Democrat Party and reduce the power of the old Establishment wing.

The second thing that it is attempting to do is bring the radical liberal fringe voters, who backed Sanders, back to the Democrat party, as active voters. And, it is designed to woo liberal contributors.

Brazille is also attempting to cast herself as the victim, in order to mitigate her activities in support of HRC and against Sanders. This will enable her to be hailed as a heroine later and reenter the DNC hierarchy.

It is nothing more than politically motivated BS designed to bring the Sanders mushrooms back on board with the Democrat Party.

Is everyone supposed to forget that Brazile was Clinton-Promoter-in-Chief before she became Clinton-Critic-in-Chief?

RE: “The second thing that it is attempting to do is bring the radical liberal fringe voters, who backed Sanders, back to the Democrat party, as active voters.”

They should be hardily encouraged to form their own 3rd party, or heck, even a 3rd, 4th and 5th party!

I think you are right. Clinton is done. And lookee here, on cue the Dems have introduced their new candidate Tulsi Gabbard:
Tulsi Gabbard https://www.newyorker.com/magazine/2017/11/06/what-does-tulsi-gabbard-believehttps://www.newyorker.com/magazine/2017/11/06/what-does-tulsi-gabbard-believe

On cue, Wikipedia notes in the second sentence that Tulsi was on board with Bernie. But uh, oh, she was a vice chair in the DNC. But no problem because Clinton and DWS were responsible for that, or that’s the story anyhow.

Tulsi Gabbard (/ˈtʌlsi ˈɡæbərd/, born April 12, 1981) is an American politician and member of the Democratic Party who has been the United States Representative for Hawaii’s 2nd congressional district since 2013. She was also a vice-chair of the Democratic National Committee until February 28, 2016, when she resigned to endorse Senator Bernie Sanders for the 2016 Democratic presidential nomination.[2] Elected in 2012, she is the first American Samoan[3] and the first Hindu member of the United States Congress.[4] She served in a combat zone in Iraq.[5] Gabbard (then known as Tulsi Gabbard Tamayo) served in the Hawaii House of Representatives from 2002 to 2004, becoming at age 21 the youngest woman to be elected to a state legislature at the time.[6]so it

They showed her surfing yesterday. Need I say more? Expect her bio out soon, if it is not out already. That’s their girl. You heard it here first.

@Paul
McA Has approximately 30 million in personal wealth. That’s why he can afford to pardon several hundred thousand felons in the state where he lives. He can afford a neighborhood which is so heavily patrolled that it amounts to 24 hour virtual gated security.

I’d be confident too if I rigged the ballot box with felons.

The editors of the show decide who cares about what, not the guest. Anyway, the follow-up would have been “so you acknowledge the facts of Brazile’s claims, but dispute their importance?”