French president has rushed to Saudi Arabia to douse the flames. 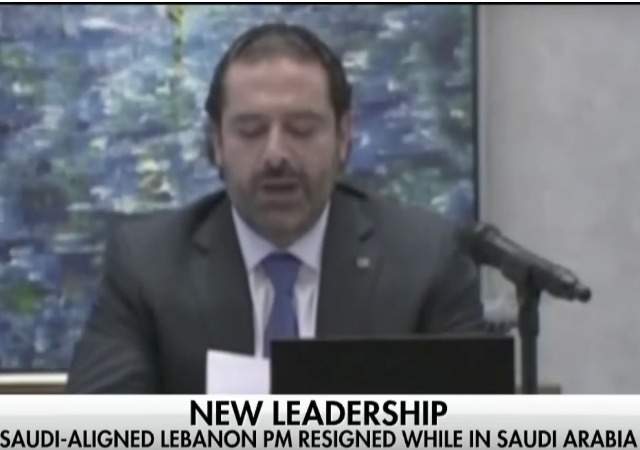 Last weekend, Saudi Arabia began an “anti-corruption” purge as a way to consolidate power for the future leader.

While that received a lot of attention, something slipped through the cracks. Lebanese Prime Minister Saad al-Hariri resigned from his post during a trip to Saudi Arabia, “citing the destructive role of Iran and Hezbollah in the Middle East.”

Now Saudi Arabia has demanded its citizens leave Lebanon immediately due to “a dispute over the influence of Iranian ally Hezbollah in a country that hs been a battleground in the rivalry between Riyadh and Tehran.” Lebanon believes the kingdom is holding the prime minister, with some claiming Saudi officials forced him to resign and holding him under house arrest. Two other gulf states have also advised against traveling to Lebanon.

“In the light of the current situation in Lebanon, the kingdom asks its citizens living or visiting Lebanon to leave as soon as possible,” Saudi Arabia’s foreign ministry said on Thursday. It wasn’t immediately clear whether Saudi Arabia recalled its diplomats from Beirut.

Kuwait said it would evacuate its citizens from Lebanon on Friday morning. It is sending a plane to Beirut capable of carrying 330 people “to enable the transfer of Kuwaitis from there as quickly as possible,” according to a statement carried by Kuwait’s official news agency.

Saudi Arabia, a Sunni kingdom, considers Hezbollah, a Shiite organization, a terrorist organization. Due to the dominance of Hezbollah in Lebanon, one Saudi official said Lebanon is “in a state of war with the kingdom.”

The kingdom has become more aggressive towards Hezbollah, even launching a war in Yemen to stop Houthi rebels, which Saudi officials claim receive “weapons and aid from Iran.”

The officials blamed a recent missile attack from Yemen on Iran. From The New York Times:

“It was an Iranian missile, launched by Hezbollah, from territory occupied by the Houthis in Yemen,” Adel Al Jubeir, the Saudi foreign minister, said on CNN earlier this week. Hezbollah didn’t immediately comment.

However, some experts do not think a war will happen:

While analysts said a war was unlikely — because Saudi Arabia was not capable of waging one and Israel did not want one now — they worried that with so many active conflicts in the region, any Saudi actions that raised the temperature increased the risk of an accidental conflagration.

“There are so many fuses, so little communication, so many risks of something exploding, that there’s little chance of something not going wrong,” said Robert Malley, the former director of Middle East policy in the Obama White House and now vice president for policy at the International Crisis Group. “Everything needs to go right to maintain calm.”

Two Lebanese officials believe that Saudi Arabia is keeping al-Hariri against his will and under house arrest. From Reuters:

A third source, a senior politician close to Saudi-allied Hariri, said Saudi Arabia had ordered him to resign and put him under house arrest. A fourth source familiar with the situation said Saudi Arabia was controlling and limiting his movement.

In a televised statement indicating deep concern at Hariri’s situation, his Future Movement political party said his return home was necessary to uphold the Lebanese system, describing him as prime minister and a national leader.

“Keeping Hariri with restricted freedom in Riyadh is an attack on Lebanese sovereignty. Our dignity is his dignity. We will work with (foreign) states to return him to Beirut,” said the senior Lebanese official, speaking on condition of anonymity because the government had yet to declare that position.

The kingdom supported al-Hariri a year ago, that made him prime minister and put Christian politician Michael Aoun, who is close to Hezbollah, as president.

A fourth source said that the kingdom pushed al-Hariri to have a “tougher stance against Hezbollah.” When that did not happen, “the Saudis had to accelerate the process and to force a resignation.” From The Wall Street Journal:

“Saudi Arabia hoped Aoun would be independent. Instead, it discovered day by day that Iran’s influence was just growing—and that it was indirectly responsible for it because it backed the deal between Hariri and Aoun,” said Abdullah al-Shammary, a former Saudi diplomat and political analyst. “This is a new beginning.”

Al-Hariri’s aides and Saudi officials have denied claims that he is under house arrest. Reuters reported that al-Hariri’s aides changed their tone after a Future Movement meeting at his Beirut home:

A statement read by former Prime Minister Fouad Siniora said his return was “necessary to recover respect for Lebanon’s internal and external balance, and in the framework of full respect for Lebanese legitimacy”.

Hariri’s aunt, Bahia, sat next to Siniora as he read the statement. The party stood behind his leadership, it said.

French President to the Rescue?

French President Emmanuel Macron traveled to Saudi Arabia at the last minute on Thursday night to meet with King Salman and Crown Prince Mohammed bin Salman. France continues to have close ties to its former colony Lebanon. From Reuters:

He told a news conference in Dubai that the decision to go to Riyadh had been made on Thursday morning, and that his first face-to-face talks with the prince would focus on “regional questions, in particular Yemen and Lebanon”.

Macron said he would “emphasize the importance of Lebanese stability and integrity” in his talks in Riyadh, adding: “My wish is that all Lebanese political officials live freely in Lebanon … which means having a very demanding stance on those who could threaten any leader.”

Television pictures showed a smiling Macron being met at Riyadh airport by the crown prince.

Macron told reporters that they have had “informal contacts with Hariri, but no request to transfer him to France.”

this is how world wars begin.

Iran, thanks to feckless Obama, has been emboldened.
Iran has instigated all sorts of attacks against US forces and US allies.
Trump is the right man at the right time. we need to shut down Iran and Turkey, if not now, we will be forced into a frontation at some time. Israel and the Fakistinians will also be brought in to this and G-D willing the Fakistinians will be destroyed and a peace between Arabs and Israel will FINALLY on the 100th anniversary of the Balfour declaration.

The French President is rushing to SA to douse the flames? Really? Is he offering discounts on white flags?