“It literally fell in my life, and I had to make a decision.” 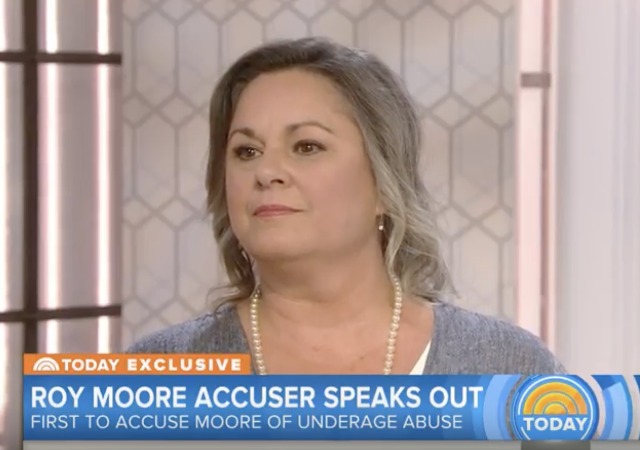 Earlier this month, The Washington Post published Leigh Corfman’s accusations of sexual assault against Alabama Senate candidate Roy Moore when she was only 14 and he was in his 30s. After that, more women came forward with their own stories.

Corfman made her first media appearance on the Today show with Savannah Guthrie and explained that she wanted to confront Moore on many occasions. But she decided to go public after WaPo found out about her story and contacted her.

Corfman said that she would only tell WaPo her story “if they found additional people.” They found those people and she spoke:

“I didn’t go looking for this, this fell in my lap. It literally fell in my life, and I had to make a decision,” she said.

She also said that she has not received any payment or gifts for her story:

“If anything, this has cost me,” she said, explaining she’s had to take a leave of absence from her job. “I have no tickets to Tahiti and my bank account has not flourished. If anything it has gone down because currently I’m not working.”

Corfman retold the story of what happened to her:

Corfman said Moore first approached her outside an Alabama courthouse as she was waiting for her mother inside. He asked for her phone number and later arranged to meet her pick her up and he took her back to his house.

Corfman said the second time she went to Moore’s house, he laid out blankets on his living room floor and “proceeded to, um, seduce me, I guess you would say.” He removed most of her clothing, left the room and then returned wearing only in his “white underwear.”

“He touched me over my clothing, what was left of it, and he tried to get me to touch him as well,” she recalled.

Corfman said she pulled back, frightened, and had Moore take her back home.

She kept her composure as she explained to critics that accused her of not saying anything before. She did tell people. First she told her friends and eventually told her parents. She wanted to confront Moore, “but feared the repercussions against her and her family.”

Moore has denied all the accusations against him and refuses to step aside. The special election is on December 12 and Republican Governor Kay Ivey said it will go on as scheduled. Ivey has also said she will still vote for Moore, even though she believes the women, to keep the GOP majority in the senate.

Many Republicans across the nation have called on Moore to step aside if the allegations are true. President Donald Trump finds the allegations “troubling,” but wants the people of Alabama to determine his fate. Trump agreed with the National Republican Senate Committee when it decided to “withdraw its support for Moore’s campaign.”

Professor Jacobson explained that if Moore wins, the Senate could expel him if it invokes Article I, Section 5, clause 2, of the Constitution:

If enough evidence accumulates, and if Moore does win the election, the Senate has wide discretion in expelling members. Article I, Section 5, clause 2, provides that: “Each House may determine the Rules of its Proceedings, punish its Members for disorderly Behaviour, and, with the Concurrence of two-thirds, expel a Member.” The Senate could hold proceedings in which testimony and other evidence is gathered, and could reach a determination.

She says she spoke with her kids when they were in Junior High and elementary school, about coming forward. A “high overview.” And they vetoed her going public.

Who asks their elementary-aged child to make that decision?

Having been a 14-year-old girl myself once, I completely agree with INspector Rudy that the M.O. described isn’t that of an aggressive predator.

Also, again, the reporter cites the number “8” additional women, but 7 of them have claims that aren’t even noteworthy.

Even if true, not enough to deny Alabama or America a senator opposed to the slicing and dicing of unborn human beings. We know Jones favors keeping the butchering legal.

What do progs do?

Double down on stupid.

As the “story” evolves, it can be shown with near certainty that both of Moore’s accusers (really, there are only 2) are liars. It’s near impossible for their stories to be remotely accurate.

Nelson’s “proof” is a signature in a yearbook, which is of course, proof of nothing. If it were actually Moore’s signature, that yearbook would already be in the hands of a professional for examination. It’s not, nor will it ever be. She cannot even prove she was an employee of the restaurant. No one that worked there remembers her.

Corfman – give me a break. That story is imploding every day. Just read.

Fabricated stories. Believed by the willing ’till the very end. Always doubling down.

And they will claim they are “principled”. They have integrity. The truth be damned.