Do Democrat Senators get one free grope, or will Senate move to expel Franken as is talked about with Roy Moore? 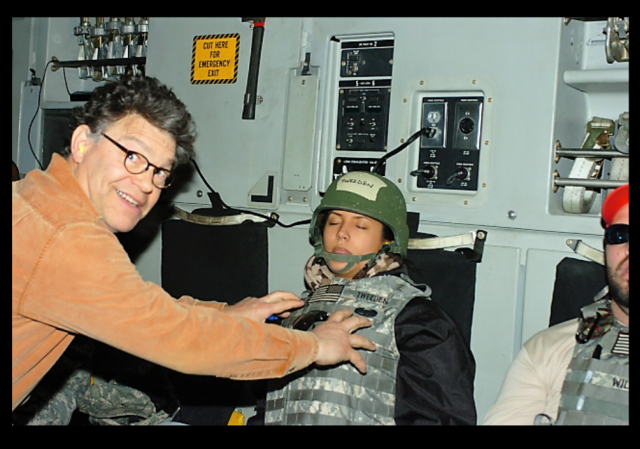 Leeann Tweeden, now a local radio news anchor in Los Angeles, has authored an article accusing Senator Al Franken of non-consensual sexual contact in 2006, during a USO tour in the Middle East. This contrasts with the accusations against candidate Roy Moore, which involve alleged conduct several decades ago.

Since there have been calls to “expel” Moore should he win, will there be calls to expel Franken for conduct which took place not long before his election to the Senate in 2008.

The article is at the Talk Radio 790 KABC website. Here’s an excerpt, Senator Al Franken Kissed and Groped Me Without My Consent, And There’s Nothing Funny About It:

In December of 2006, I embarked on my ninth USO Tour to entertain our troops, my eighth to the Middle East since the 9/11 attacks…. The headliner was comedian and now-senator, Al Franken….

He continued to insist, and I was beginning to get uncomfortable.

He repeated that actors really need to rehearse everything and that we must practice the kiss. I said ‘OK’ so he would stop badgering me. We did the line leading up to the kiss and then he came at me, put his hand on the back of my head, mashed his lips against mine and aggressively stuck his tongue in my mouth.

I immediately pushed him away with both of my hands against his chest and told him if he ever did that to me again I wouldn’t be so nice about it the next time.

I walked away. All I could think about was getting to a bathroom as fast as possible to rinse the taste of him out of my mouth.

I felt disgusted and violated.

Not long after, I performed the skit as written, carefully turning my head so he couldn’t kiss me on the lips.

At the time I didn’t want to cause trouble. We were in the middle of a war zone, it was the first show of our Holiday tour, I was a professional, and I could take care of myself. I told a few of the others on the tour what Franken had done and they knew how I felt about it.

I tried to let it go, but I was angry.

Tweeden then goes on to explain how only later did she find out that Franken groped her while she slept, when she saw the photo (above, featured image):

Other than our dialogue on stage, I never had a voluntary conversation with Al Franken again. I avoided him as much as possible and made sure I was never alone with him again for the rest of the tour.

Franken repaid me with petty insults, including drawing devil horns on at least one of the headshots I was autographing for the troops.

But he didn’t stop there.

The tour wrapped and on Christmas Eve we began the 36-hour trip home to L.A. After 2 weeks of grueling travel and performing I was exhausted. When our C-17 cargo plane took off from Afghanistan I immediately fell asleep, even though I was still wearing my flak vest and Kevlar helmet.

It wasn’t until I was back in the US and looking through the CD of photos we were given by the photographer that I saw this one: [see photo above]

I couldn’t believe it. He groped me, without my consent, while I was asleep.

I felt violated all over again. Embarrassed. Belittled. Humiliated.

How dare anyone grab my breasts like this and think it’s funny?

I told my husband everything that happened and showed him the picture.

I wanted to shout my story to the world with a megaphone to anyone who would listen, but even as angry as I was, I was worried about the potential backlash and damage going public might have on my career as a broadcaster.

But that was then, this is now. I’m no longer afraid.

If Al Franken engaged in this conduct, it doesn’t excuse the alleged behavior of Roy Moore several decades ago. But it does raise important political questions as to whether Democrats will be held to the same standard as Republicans.

Moore vehemently denies the allegations, and at least one piece of evidence, an alleged handwritten note by Moore in a yearbook, is disputed pending a forensic examination. In Franken’s case, there’s photo evidence.

Faced with that evidence, Franken has apologized:

How convenient for Franken to portray it as just a joke gone bad.

Should it make a difference that as of now there is only one accusation against Franken? Do Democrats get one free grope?

If the same standards are applied to Democrats and Republicans, then we should be talking about using the Senate’s constitutional power to expel Al Franken from the Senate.

Al Franken is going to save Roy Moore's Senate campaign.

Whoever is running this simulation is high AF.

This is the perfect story because it exposes the hypocrisy of both Democrats and the GOPe at the same time.

Want to hear something really funny?

Mike Pence wouldn’t let himself be alone with women visitors

We can see the difference between Moore and Franken. One is in a he said-she said position but the other is so stupid that he photographed his despicable act.

I am not sympathetic to sexual predators, but there are reasons why there are rules of evidence, due process, and old those other things going back to the Magna Carta (and two or three reliable witnesses, going all the way back to Moses Our Teacher).

I have a lot of suspicion about some of the accusations going around. I remember Duke University’s lacrosse players who were accused of rape, but, it turned out, falsely. There was Herman Cain, against whom they trotted out the old racist stereotype of the black male sexual predator–but when he dropped out of the presidential race, those charges mysteriously went away.

What of Moore? The first accuser is an activist for the Democratic Party. The second, apparently, has a yearbook signature which may be forged. Further, when she was getting her divorce in Moore’s court a number of years back, she didn’t ask for Moore to recuse himself. Why didn’t anyone come forward when Moore’s career as a judge was down and out over his refusal to remove the Decalogue from the courthouse lawn? This is all admittedly fishy.

While I am aware as anyone of the legends of the Hollywood casting couch and that the place has long been notorious for sexual experimentation, I’m starting even to wonder whether a few of the accusations against some of the Hollywood bigwigs might not also be fishy. Sure, people like Harvey Weinstein and others under accusation went into an industry that taught them that getting sexual favors was one of the “perks” of success. But of the women and young men now making accusations, I’d like to know how many might have found themselves in consensual relationships that went sour? Did some, at the time, think they were “just paying show biz dues”, or “flipping the bird at a repressive, ‘puritanical’ upbringing?” These are important questions.

Even with Big Bill Clinton, it seems that Monica Levinsky was herself sexually adventurous, and fund herself with a powerful man all too willing to accept sexual favors (even if I’m still of the mind that the Clintons are people with YUUUUGE character flaws).