Scott Walker’s 2012 recall election wasn’t the first election I ever covered, but it definitely was one of the most intense.

It was what I called Wisconsin’s Long, Strange Trip, linking to our exhaustive coverage of all the crazy:

When Walker defeated the Recall late in the evening of June 5, 2012, it was Oh what a night. and the fireworks website overlay was lit. 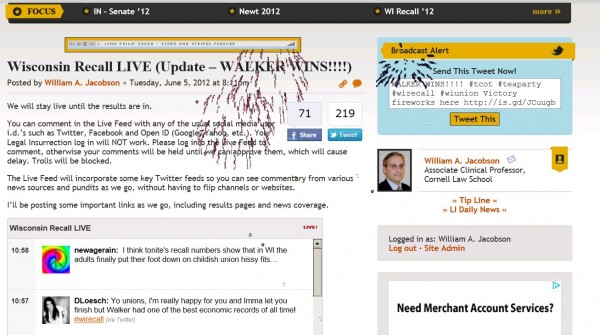 There is no one the left hates more than Walker. I think they hate him more than they hate Trump, because Walker not only has defeated them at the ballot box, he has transformed Wisconsin with a solid conservative agenda.

The Walker obsession will be back again, in November 2018, because Walker is running for reelection to his third term.

The Christian Science Monitor has a lengthy and excellent post not only on the coming war against Walker, but how he has transformed the state, In Wisconsin, will Walker’s reelection bid serve as conservatism’s next test?

As to the Walker transformation, the Monitor writes:

Of all the states Hillary Clinton lost, perhaps none was as shocking as Wisconsin, with its long history of progressive politics.

But in retrospect, it shouldn’t have been.

While Democrats still outnumber Republicans here overall, that’s not the case among elected officials. From the legislature to the governorship, from the attorney general to the secretary of natural resources, the state is almost entirely controlled by Republicans – who, for the better part of a decade, have been steadily remaking it in their image….

Scott Walker won the governorship here as part of a nationwide Republican wave in 2010, and immediately set about turning the state’s finances around, eliminating a projected $3.6 billion deficit without raising taxes, by cutting funding for everything from schools to environmental research.

In the process, Wisconsin, one of the first states to introduce income taxes and elect Socialist politicians, has undergone a wholesale reinvention – shifting from a model of government largesse to one of individual responsibility and accountability.

Walker, in the process, broke the back of the powerful teacher’s and other unions, and the national labor movement has no bigger target than defeating Walker.

As to the coming War on Walker the Monitor writes:

Both sides are already gearing up for a huge fight that some say could cost up to $100 million. To many, it’s a proxy war of sorts between those who hold up Walker as an icon of American conservatism and those determined to reassert liberal values in a key state in the Trump Era. Democrats will almost certainly need to win Wisconsin if they have any hope of defeating President Trump in 2020, and taking back the governorship would be a significant first step.

“We hope the whole nation will pay attention to Wisconsin because we are a test case of what happens under conservative policies,” says Martha Laning, chair of the Democratic Party of Wisconsin….

Wisconsin’s long, strange trip is not over.

Walker surely deserves credit for doing what most would have said was impossible: take on the public-sector unions in Wisconsin, and survive politically.

And, yes, I can still hear the tones of the NPR announcers as they realized Gov. Walker was going to win the recall election: you’d think the family dog had just died.

The big issue in the next gubernatorial election probably should be whether the deal with Foxconn is a good deal for Wisconsin, yet Walker seems to be distancing himself from it. Why would he do that? Is Foxconn a political liability or asset for him?

All they’ll have to do is roll out some more unprovable 30 year accusations. Walker will be gone and Rags will have to cheer.

Live by the smear and die by it.