He allegedly groped his female employee’s breasts and butts. 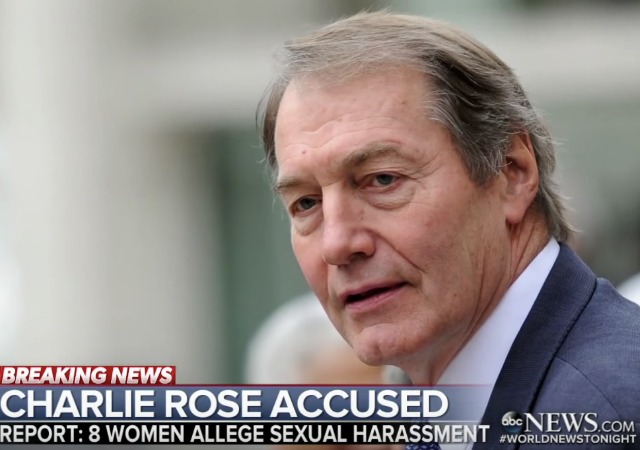 On Tuesday, The Washington Post published an article that detailed disgusting behavior Charlie Rose did to his female employers. CBS, PBS, and Bloomberg suspended him. This morning, CBS fired the morning co-host and 60 Minutes contributor. From WaPo:

His firing was announced by CBS News President David Rhodes, who wrote in a midday memo to the network’s staff that it was “effective immediately.”

“Despite Charlie’s important journalistic contribution to our news division, there is absolutely nothing more important, in this or any organization, than ensuring a safe, professional workplace — a supportive environment where people feel they can do their best work,” Rhodes wrote. “We need to be such a place.”

Rose — best known for his award-winning interview program on PBS — had co-hosted “CBS This Morning” since the show’s launch in 2012 and was a contributing correspondent for the network’s Sunday night news magazine, “60 Minutes.”

Rose was suspended by CBS News on Monday, shortly after The Post’s story published. PBS and Bloomberg also said they would halt distribution of Rose’s namesake interview program, which is produced by Charlie Rose Inc., an independent television production company.

PBS, which airs The Charlie Rose Show, has also fired the journalist:

PBS also terminated its relationship with Rose on Tuesday, after saying on Monday night it would no longer distribute Rose’s nightly interview show, “Charlie Rose.”

“PBS expects all the producers we work with to provide a workplace where people feel safe and are treated with dignity and respect,” a spokesperson told PBS NewsHour.

Bloomberg, too, said it would keep Rose’s show, which is recorded at the company’s Manhattan headquarters, off the air “for the foreseeable future.”