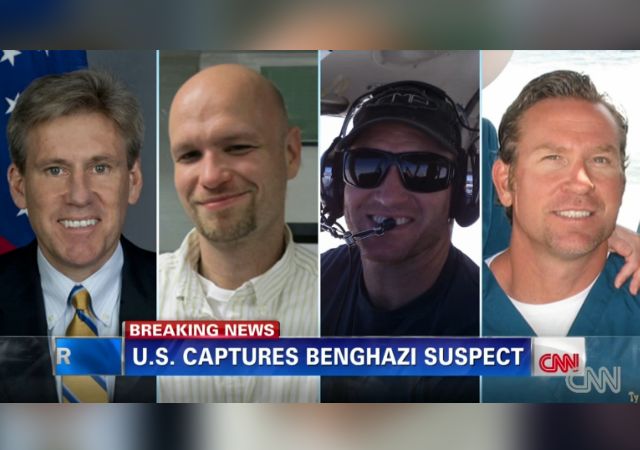 A federal jury has found Ahmed Abu Khatallah, a key suspect of the Benghazi attacks in 2012, guilty on four of the 18 charges he faced. From Fox News:

Khattala, 46, was convicted of two counts of conspiracy to provide material support to terrorists, one count of maliciously destroying U.S. property and placing lives in danger, and one count of using and carrying a semiautomatic weapon during the attack. He faces a mandatory minimum of 10 years in prison for the firearms offense and could still receive a life sentence.

In a statement, Acting Assistant Attorney General for National Security Dana Boente said Khattala’s arrest and conviction “were critical steps in our efforts to identify and hold accountable those who were responsible for the terrorist attacks on our facilities in Benghazi, Libya.

“Our work is not done,” Boente added. “We will not rest in our pursuit of the others who attacked our facilities and killed the four courageous Americans who perished that day.”

The jury did not find Khattala guilty of the four murder charges he faced. On the providing support to terrorists charges, “the jury returned a special finding that his actions did not result in death.” If they did then he would have faced life sentences for each one. But now the charge only carries up to 15 years.

The DOJ decided last year to seek out a life sentence for Khattala and not the death penalty.

Parents of two victims spoke out against the verdict. Fox News continued:

“I am not surprised. I am not happy,” Sean Smith’s mother, Pat, said in a statement responding to the verdict. “My son died a horrible death … I think the people who bear responsibility — Secretary of State Hillary Clinton — aren’t even touched.”

Charles Woods, the father of Tyrone Woods, called the verdict “outrageous” and “a miscarriage of justice.”

“I am very bothered by the fact the U.S. government gave constitutional rights and due process rights to a foreign national who allegedly killed Americans outside the U.S,” Woods said. “This is what bothered me from the very beginning.”

President Barack Obama’s administration brought Khattala to the states in 2014 instead of Guantanamo Bay. One official said the capture “was pretty clean” and the suspect “was isolated.”

The joint Special Operations and FBI planned the mission “for months” and executed it after President Barack Obama approved it. No one released details of the operation.

The U.S. transported Khatallah on a Navy Ship, which took about 13 days to arrive back to the states. Reuters explained that U.S. intelligence officials questioned him before anyone read him “his Miranda rights and questioned by FBI agents.” Reuters continued:

He waived his rights to remain silent and have a lawyer present before speaking with the agents. His attorneys had sought to suppress the statements, saying the government had violated his rights.

However, U.S. District Court Judge Christopher Cooper issued a lengthy ruling in August that found his statements could be admitted at trial.

In October, U.S. officials caught Mustafa al-Imam, a militant in the attacks, a man named by Khattala during his interrigation..