“John Conyers is a powerful man in Washington, and nobody wanted to cross him.” 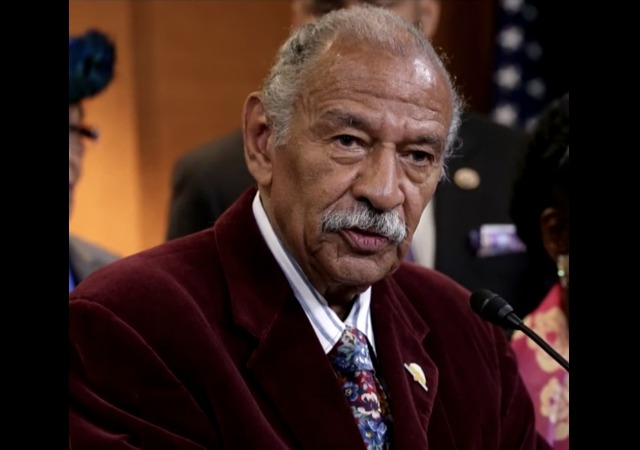 Another ex-staffer of Rep. John Conyers (D-MI) has come forward and accused him of sexual harassment.

Deanna Maher worked for Conyers from 1997 to 2005. She told The Detroit News that he “made unwanted sexual advances toward her, including inappropriate touching.”

Conyers is already under an ethics investigation after a bombshell report from Buzzfeed that detailed a wrongful dismissal claim he settled in 2015 after a former employee said he fired her because she refused his sexual advances.

The first instance of harassment happened, Maher said, shortly after the congressman hired her in September 1997 during an event with the Congressional Black Caucus.

“I didn’t have a room, and he had me put in his hotel suite,” said Maher, 77, adding that she rejected his offer to share his room at the Grand Hyatt in Washington and have sex.

In the second alleged incident in spring 1998, Maher said she was in the passenger seat while Conyers was driving to Detroit Metropolitan Airport and that he touched her.

“He was trying to feel me up with his right hand,” she said. “I kept pushing his hand away. Then he put his hand on my neck and started trying to tickle me. We were on I-75, and he was driving erratically. I was saved by the bell because we got pulled over by the police for the way he was driving.”

In 1999, at a meeting in Highland Park with ministers, Maher said Conyers “put his hand up my dress and whispered in my ear, ‘I didn’t know you had such great legs.’ ”

Conyers’ lawyer Arnold Reed brushed off the allegations because she continued to work for the lawmaker. However, Maher had a response:

“I needed to earn a living, and I was 57. How many people are going to hire you at that age?” she said.

She also did tell people about the harassment at the time, even to former Detroit Free Press reporter Joel Thurtell:

“She told me about the sexual harassment claims, but at the time she didn’t feel confident she wouldn’t be hung out to dry and retaliated against,” said Thurtell, who left the Free Press in 2007 and runs a blog, “Joel on the Road.”

“So there was no way I could report it. I spoke with her last week, and she said she just didn’t feel comfortable at the time going on the record with the allegations.”

Maher also discussed the sexual harassment incidents with a Detroit News reporter in 2013 but didn’t want to go on the record.

Maher claimed she told the Ethics Committee. She also went to the U.S. Attorney’s Office in 2001 to report “an assault by a male employee of Conyers that occurred while the congressman was in a nearby room.” She said that employee “grabbed her and forcibly kissed her and ended up sexually harassing her multiple times.”

So why speak up now? She said (emphasis mine):

Conyers’ status as a leading Democrat deterred her from going public at the time, Maher said, adding she doesn’t have anything to lose now.

BINGO! Conyers is the longest serving member of the House and an icon from the civil rights movement. You know who proved Maher’s point this weekend? None other than House Minority Leader Nancy Pelosi! Fuzzy included the transcript from the faux feminist’s appearance on Meet The Press (emphasis mine):

CHUCK TODD: John Conyers. What does that mean for him? Right now. In or out?

REP. NANCY PELOSI: We are strengthened by due process. Just because someone is accused — and was it one accusation? Is it two? I think there has to be — John Conyers is an icon in our country. He has done a great deal to protect women — Violence Against Women Act, which the left — right-wing — is now quoting me as praising him for his work on that, and he did great work on that. But the fact is, as John reviews his case, which he knows, which I don’t, I believe he will do the right thing.

CHUCK TODD: But he took advantage of a situation where he had a – the rules of Congress and I know you guys want to change these rules, but he got to hide his settlement, he got to – his accusers had to go through all sorts of craziness, so why is he entitled to new due process in this case?

REP. NANCY PELOSI: No, I I – we are talking about what we have heard. I’ve asked the Ethics Committee to review that. He has said he’d be open – he will cooperate with any review.

CHUCK TODD: Do you believe the accusers?

REP. NANCY PELOSI: I don’t know who they are. Do you? They have not really come forward. And that gets to —

CHUCK TODD: So you don’t know if you believe the accusations?

REP. NANCY PELOSI: Well, that’s for the Ethics Committee to review. But I believe he understands what is at stake here and he will do the right thing. But all of these non-disclosure agreements have to go. By the way, some of them are there to protect the victim because they didn’t want some of it to be public. But that’s over. In other words, if the victim wants to be private, she can be — he or she can be.

CHUCK TODD: I guess it goes back to what is this line? What is a fireable offense? You say it’s zero tolerance.

CHUCK TODD: But zero tolerance — what does that mean if you’re saying John Conyers, who already had due process, gets to stay right now.

REP. NANCY PELOSI: As I said, we’ve asked for the Ethics Committee to review that. He, I believe, will do the right thing. It’s about going forward.

CHUCK TODD: Where are you on Senator Franken?

REP. NANCY PELOSI: Well, same thing. I don’t think that you can equate Senator Franken with Roy Moore. It’s two different things. So, you know, let’s have some discernment.

Thanks, Nancy, for providing evidence why females like Maher do not come forward! So disgusting. She received plenty of backlash and changed her tune once Conyers resigned as ranking member of the Judiciary Committee.

Conyers denied the allegations in the BuzzFeed report. His lawyer said he denies these allegations as well, insisting the lawmaker will not resign. Conyers will cooperate with the ethics investigation.

Actually, it sounds like everybody got their money’s worth … except for course for the taxpayer who, as usual, got stuck paying the bill.

But, but he’s an icon don’t you know.

Rosa Parks hired as a secretary to US Representative John Conyers

If Conyers goes, there is going to be a lot of damage. Might be the only chance for the new DNC to survive. GOP is going though a change too. I doubt the lazy millenniums are up to task. Maybe Gen. Z will drive it or the GOP.

FYI: I am routin for Gen Z

The survey, which began in September 2016 and continued through the election, found that 73 percent of respondents are engaged or “somewhat engaged” in politics. And among the entire group of first-time voters, the economy was the top issue (44 percent), followed by education (39 percent), gun rights (28 percent) and health care (18 percent). Nearly half (47 percent) said they get their news from social media sites or online news sites.

I seem to recall a certain Republican named Packwood, run out of Washington for the same…

See…. what’s going to happen here is the women who just quit or changed jobs are going to be mad when they realized they could have gotten a pay off too….

Please, this is simply incredible. Here we have a woman, who worked for Conyers from 1997-2005 [eight years]. She claims that Conyers inappropriately touched her on numerous occasions during the time of employment beginning right she was hired. She endured this heinous behavior for EIGHT YEARS. Was she a prisoner chained in his basement? Was he holding her family hostage? And what about the TWELVE years since she left his employ? She says that she “needed” the job. Then to make her credible, we have a former reporter from the Detroit Free Press, who now runs a blog, who claims that she told him about it in 2007, 2 years after she had left Conyers’ employ but wouldn’t go “on[the[record” so he couldn’t report it. A reporter who wouldn’t use “anonymous sources” to support a juicy story? Incredible.

Unless Conyers flew her around the country at taxpayer expense, who cares, at this point?